With the influence of his uncle, the poet and physician Dr Hugh Downman, he entered the navy on 10 October 1776 aboard the Thetis 32, Captain Mitchell Graham, who was succeeded by Captain John Gell, being engaged amongst other duties in bringing home the trade from St. Helena and taking a convoy out to North America.

On 14 August 1778 he joined the Arethusa 38, Captain Samuel Marshall, which vessel was wrecked when she went aground on Moulines under the command of Captain Charles Holmes Everitt Calmady in chase of a French frigate on 19 March 1779. Downman remained a prisoner of the French until January of the following year and then rejoined Captain Marshall aboard the Emerald 32, serving in home waters and with the Channel fleet. In May 1782 he joined the Edgar 74, Captain William Cayley, flying the broad pennant of Commodore William Hotham, in which he served with the Channel fleet in its summer campaign and was present at the Relief of Gibraltar on 18 October 1782. 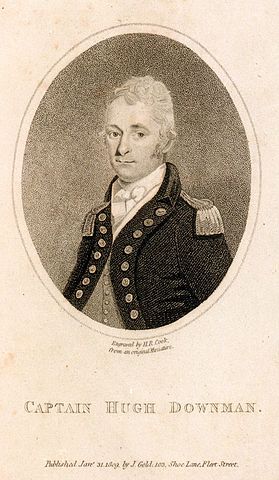 From the peace in 1783 he served aboard the Queen 98, Captain John Wainwright, Triumph 74, Captain John Knight, and Barfleur 98, Captain Knight, all three vessels employed as the flagships at Portsmouth of Admiral John Montagu and Rear-Admiral Sir Samuel Hood. In February 1789 he sailed for India with many other promising young officers aboard the Crown 64, Captain James Cornwallis, flying the broad pennant of Commodore Hon. William Cornwallis. Whilst in the East Indies on 5 March 1790 he was commissioned lieutenant of the Perseverance 36, Captain Isaac Smith, returning shortly afterwards to the Crown, Captain Robert Manners Sutton, on which he arrived back in England in May 1792.

On 2 January 1793 Downman was appointed to the Alcide 74, Captain Robert Linzee, employed in the Mediterranean fleet. He served at the occupation of Toulon from 20 August, and in the attack on Corsica on 1 October, where he led the sighting of the first battery above the Martello tower at Fornelli, and later helped haul the cannon to a commanding position over the Convention Redoubt at San Fiorenzo. Downman followed Linzee, now promoted commodore, to the Windsor Castle 98, before on 7 October 1794 he joined the Victory 100, Captain Knight, the flagship of Admiral Lord Hood, returning shortly afterwards to England.

Downman remained on the Victory after she returned to the Mediterranean, participating in Admiral William Hotham’s inconclusive battle with the French on 13 July 1795, when she flew Rear-Admiral Robert Man’s flag. He later fought at the Battle of St. Vincent on 14 February 1797, when the Victory carried the flag of the commander-in-chief, Admiral Sir John Jervis.

Having briefly served as the first lieutenant aboard the new flagship Ville de Paris 110, Captain Hon. George Grey, Downman was promoted commander of the sloop Speedy 14 on 26 July 1797, capturing four Spanish privateers in short time, including the luggers Tagus 2, and El Domino Lucas 2, the Spanish schooner Palma 2, and the lugger Pilgrim 3, as well as two French privateers off Oporto in company with the Kingfisher 18, Commander Hon. Charles Pierrepont.

On 3 February 1798 he fought an engagement with the superior French privateer Papillon 14 some fifty miles off Vigo, which continued into the next day with the Speedy losing five men killed, including a lieutenant and the boatswain, and four wounded. At the conclusion of the engagement she did manage to retake a prize that she had been forced to abandon on the first night of the action.

On 26 December 1798 Downman was posted captain of the Santa Dorothea 32, although he had actually been commanding her since September after she had been captured by the Lion 64, Captain Manley Dixon. His command was the largest vessel present at the capture of the Spanish brig San Leon 16 on 28 November, and he continued with the Santa Dorothea off Malta.

During January – March 1799 Captain William Brown acted for him, and having rejoined the frigate he was later at the blockade of Savona. Here in April 1800 he captured a vessel carrying the French General Louis Charles Antoine Desaix, together with other members of General Buonaparte’s staff who had been sailing from Egypt to France, but in accordance with the controversial peace treaty of El Arish the officers were released. He brought a successful conclusion to the siege of Savona with the surrender of the enemy on 15 May 1800, during the campaign that also saw the occupation of Genoa on 4 June 1800. After Buonaparte defeated the Austrians at the Battle of Marengo Downman evacuated both the Duke of Savoy and the contents of the Florentine galleries to the Kingdom of Naples, for which he was rewarded with a diamond ring by the beneficiaries of his action.

In July 1801 the Santa Dorothea escorted three Swiss regiments out to Egypt, for which Downman received the Ottoman Empire’s Order of the Crescent, and his frigate remained thereafter on the North African coast. In April 1802 he became flag-captain to Rear-Admiral Sir James Saumarez aboard the Caesar 80 off Lisbon, retaining this position until August when the ship was paid off at Plymouth after returning to Portsmouth in the previous month.

When hostilities recommenced in the spring of 1803 he was appointed to recommission the Grampus 50 before resuming his position as flag-captain to Saumarez in December in place of the terminally ill Captain Thomas Larcom aboard the Diomede 50 in the Channel Islands.

In August 1805 the Diomede was at Portsmouth awaiting the assembly of an East India convoy, and in November, whilst going out to the Cape, Downman moved to the Diadem 64 with the broad pennant of Commodore Home Riggs Popham. He was instrumental in the Cape’s capture on 10 January 1806, running a brig aground in order to form a breakwater and participating in the action ashore, following which he brought home Popham’s despatches in the captured French frigate Volontaire 40, Commander Hon. Josceline Percy. He then returned to his original command, the Diomede, which had in the meantime joined Popham in his unauthorised attack on Buenos Aires on 25 June. Having succeeded his acting captain, Commander Joseph Edmonds, Downman took part in the assault of Montevideo in October, and he returned home with General Lord Beresford, his ship being paid off in June 1807 after arriving back at Portsmouth via Cork.

From 8 September 1807 he was responsible for the prison hulks at Portsmouth with his broad pennant aboard the old Royal Oak 74, which had been renamed the Assistance, and he returned to active service with his posting to the Danish prize Princess Carolina 74 on 14 January 1811. Initially under orders for the East Indies, these were soon countermanded and instead he joined the squadron blockading Cherbourg where he participated in the destruction of the French frigate Amazone 40 off Cape Barfleur on 25 March. After being charged with the escort of a convoy to Madeira he was stationed thereafter in the North Sea before rejoining the blockade of Cherbourg. During 1813 the Princess Carolina was detached with the Sybille 44, Captain Thomas Forrest, in chase of the American frigate President 44 which had appeared off Norway, and after visiting Greenland waters in early 1814, and voyaging to Spitzbergen his ship was paid off on her return home on 22 September.

He married Dorothea Palmer of Portsmouth on 23 June 1803 with whom he had one son and two daughters.

Downman was of a youthful appearance with a full head of light hair and sideburns in later years. His contemporaries esteemed him as a fine seaman, if strict, and a gentleman officer who was particularly well-read at a time when it was not typical to be so. Apparently he earned the enmity of Lady Hamilton whilst serving in the Mediterranean during the 1790’s, which at the time of his obituary in 1858 was apparently regarded as a mark of distinction. He was a supporter of the radical Whig Charles James Fox, and he later claimed that his political persuasion had influenced his failure to land any command after reaching flag rank.