1731-1792. He was baptised on 10 August 1731, the second son of the Rev. John Symonds of Horringer, Suffolk, and of his wife Mary, the daughter of Sir Thomas Spring of that county. His elder brother John was an eminent academic.

Family folklore had it that Thomas Symonds left his home at a young age upon being told that his elder brother would inherit his parents’ entire estate, and that he should endeavour not to be a burden on his brother. Having impulsively made his way to Harwich he joined the Navy and was not heard of again for some fifteen years until he re-introduced himself to his brother. In the meantime, he had been commissioned lieutenant on 22 January 1755, joining the Unicorn 24, Captain Matthew Buckle, and from 6 February he saw service aboard the Elizabeth 64, Captain John Montagu.

He was promoted commander of the Albany 10 on 18 February 1762, joining Commodore James Young s squadron off the Seine that summer. On 13 July he led an unsuccessful boat attack on a flotilla of landing barges near Caen in the River Orne, which failure resulted in his court-martial on 5 August aboard the Neptune 90 at Portsmouth under the presidency of Vice-Admiral Francis Holbourne. He was handed a verdict of being guilty of conduct not becoming an officer, resulting in his dismissal from his ship.

Nevertheless, Symonds was posted captain on 18 January 1771 of the Sandwich 90, preparing for the flag of Rear-Admiral John Montagu who was to command in the Downs, and he transferred a month later to the Captain 70, going out to North America in June where Montagu had been appointed the commander-in-chief of that station during the difficult times preceding the American rebellion. The Captain returned to England in July 1774 and was paid off. 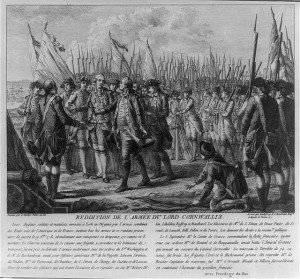 Captain Symonds was present at the surrender of Lord Cornwallis’ army at Yorktown in 1781.

He joined the Solebay 28 in September 1775, which frigate had initially put to sea in July under Captain Henry Bellew but had been returned to Plymouth Dock in a leaky state to undergo a thorough repair. Symonds was ordered to embark the American rebel Ethan Allen and some thirty other prisoners from Pendennis Castle, Falmouth, and transport them back to North America. In bitterly cold winter weather at the turn of the year the Solebay made Cork on 21 January where Symonds found himself roundly castigated for giving supplies donated charitably by the population for the alleviation of the prisoners to his own crew, and then raging at the benefactors for daring to provide further clothing to the rebels. His commodore, Sir Peter Parker, quickly overruled him and the prisoners were given the succour that other ships of the squadron had more humanely allowed them.

Symonds took the Solebay out to North America from Cork with Parker s squadron in the spring of 1776, and shortly after capturing an American whaler off Block Island, Rhode Island, he was present in the unsuccessful attack on Charleston on 28 June. At the end of the year he collected troops from St. Vincent for New York, and in the early summer of 1777 the Solebay was sent to Jamaica to be heaved down before departing that island on 20 June in escort of the homeward-bound Jamaica convoy, prior to separating off the Bahama Bank for New York Thereafter she was present at the August-November Philadelphia campaign. Amongst many other prizes the Solebay captured the Maloin letter of marquee Vicomte de Veaux 24 on 23 February 1778 whilst serving off the Chesapeake Capes.

In the winter of 1778 Symonds sailed south for the Leeward Islands, and proceeding to Jamaica he collected loyal American troops for transportation to Pensacola, Florida before entering New York from Savannah in June 1779. On 6 September he returned to New York after a cruise which saw him cut out a French merchant vessel from the Chesapeake. He subsequently departed New York with a convoy of one hundred and five transports and merchantmen on 23 December, although the Solebay was dismasted in a storm three days out of Sandy Hook and given up for lost by her charges, eventually making Portsmouth in early February. Here she was taken into dock to be coppered and refitted, whereupon Symonds left her.

On 16 June 1780 he took command of the Charon 44 which was commissioning at Chatham, and on 12 August sailed from Cork for Charleston with one hundred sail in convoy, being in company with the warships Bienfaisant 64, Captain John Macbride, and two other frigates. Next day, 13 August, the squadron ran down the notorious French privateer Comte d’Artois 64 and forced her surrender. The remainder of the year was spent cruising, during which time the Charon took the American privateer Peggy on 10 April 1781, but in September the Charon became marooned in the York River where she was destroyed by heated shot from the American army batteries. Captain Symonds was therefore present at the surrender of Lord Cornwallis’ army at Yorktown, and as the senior naval officer present he signed the Articles of Capitulation with Cornwallis on 18 October 1781.

In March 1783 Symonds commissioned the new Diadem 64 at Chatham to serve as a guardship at Plymouth, paying her off in March 1786. He then retired with his family to St. Edmund’s Hill, the residence near Bury St. Edmunds in Suffolk of his brother. He died there on 25 May 1792 after a short illness and was buried in Packenham Church, Suffolk.

Captain Symonds married firstly Mary Ann Noble who died in 1771, and by whom he had two sons and two daughters. The younger of his sons died in the same year as Mrs Symonds. At least one of his daughters was adopted by Symonds’ cousin, a Mrs Godbold, after being taken in by her aged two following Mrs Symonds’ death. His eldest son, Commander Jermyn John Symonds, lost his life with his entire crew when the sloop Helena 14 foundered in a gale off Holland on 3 November 1796. Captain Symonds married secondly a reputed beauty, Elizabeth Mallet, at Stoke Damarel in Devon on 25 March 1780, by whom he had a further three sons and four daughters, including Admiral Thomas Edward Symonds, Rear-Admiral Sir William Symonds, who became surveyor of the Navy in 1832, and Commander John Charles Symonds. A daughter from this marriage, Mary Anne Theresa, married Captain John Whitby and following that officer’s death in 1806 was the companion of his patron and great friend Admiral Hon Sir William Cornwallis, inheriting the latter’s considerable estate on his death in 1819 and corresponding with Charles Darwin on a number of experiments pertaining to silkworms. His widow subsequently married Lieutenant-General Farmar of Cork and the Royal Marines.

Symonds was regarded as an excellent sailor if risk-averse, but clearly had a furious dislike of the rebel America forces he faced and as a young man displayed a spirited disposition.

My thanks to Barry Jolly for information provided from his work – ‘The Family of Captain Thomas Symonds at Milford’ Milford-on-Sea Historical Record Society Occasional Magazine NS 4 2016.