1737-88. He was the younger son of Sir Alexander Lindsay of Evelick, Perthshire, and his wife Amelia Murray, daughter of the 5th Viscount Stormont. His uncle was William Murray, 1st Earl of Mansfield, who served as the Lord Chief Justice from 1756-88, and the elder of his sisters, Margaret, notoriously eloped with the painter, Allan Ramsey.

Lindsay was commissioned lieutenant on 2 March 1756 and commissioned the newly acquired fireship Pluto, serving in the Rochefort expedition led by Admiral Sir Edward Hawke in the following year. 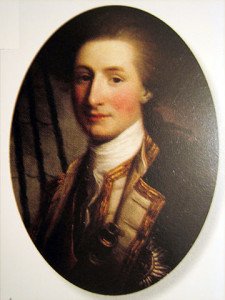 On 29 September 1757 he was posted captain of the new frigate Trent 28 which he commissioned for the first time and commanded until the peace of 1763. With this vessel he saw service in home waters, and after going out to North America in February 1758 he was present at the reduction of Louisbourg that summer. After returning home he departed once more for North America in February 1759 with Rear-Admiral Charles Holmes’ squadron, and whilst on passage was despatched by that officer to assist the Vestal 32, Captain Samuel Hood, in her ferocious engagement on 21 February with the French Bellone 36 off Cape Finisterre. The Trent was still some four miles away from the two protagonists when the Frenchmen struck her colours. Later in the same year he served at the siege of Quebec before returning home in the early summer of 1760.

In July 1760 he sailed for Jamaica, and on 4 January 1761 captured the richly-laden French merchant frigate Bien Aimè 20 off Cape Tiburon after a forty-five minute duel, suffering casualties of one man killed and five wounded in return for enemy losses of twenty men killed and wounded. He later participated in Admiral Sir George Pocock’s expedition against Havana in 1762, following which he was offered, but declined, a transfer to the Cambridge 80, whose Captain William Goostry had been killed on 1 July whilst bombarding Moro Castle, and whose ship Lindsay had temporarily commanded for the remainder of the campaign.

On 10 February 1764 he was knighted for his gallant conduct at Havana, and in November recommissioned the Tartar 28 in which he went out to Jamaica in March and assisted William Harrison with his experiments in longitude measurement. He served as the commander-in-chief of the West Florida fleet at Pensacola during 1764-5 prior to the Tartar returning home and being paid off in June 1766. In 1767 Lindsay was elected M.P. for Aberdeen and Montrose but left that seat upon parliament being dissolved in the following year.

From August 1769 he was employed as the commander-in-chief as a commodore in the East Indies, sailing in September with his broad pennant aboard the frigate Stag 32, Captain Joseph Deane. This appointment was criticised by many officers his senior as they believed that it should not have been bestowed on a captain so far down the list. His instructions were to develop contacts with the native rulers, but instead he managed to upset the East India Company with his determination to exclude them from his negotiations and as a result he was recalled. The Stag arrived back at Portsmouth at the end of March 1772. During his absence, on 28 June 1770, Lindsay had been created a K.B. and he was invested at a lavish ceremony during a durbar near Madras on 11 March 1771.

The remarkable life story of Lindsay’s illegitimate daughter Dido Elizabeth Belle, born into slavery and here pictured with her cousin Elizabeth Murray, has been celebrated in a number of works and was the subject of a 2013 feature film

In March 1778 he was appointed the first active captain of the newly commissioned Victory 100. When she became the flagship of Admiral Hon. Augustus Keppel and Captain John Faulknor in May he removed to the Prince George 90, in which he fought at the Battle of Ushant on 27 July 1778. He supported Keppel at that officer’s court martial resulting from the indecisive nature of the battle and resigned in support of his admiral on 14 April 1779, remaining on half-pay until 3 December. Whilst he was attending the court-martial his acting captain aboard the Prince George, Philip Patton, had successfully thwarted a mutiny on 16 January 1779.

On 16 August1781 he was appointed a colonel of marines, and from April to December 1783 he served under the first lord of the Admiralty, Viscount Keppel, as an Admiralty Commissioner. During the same year Lindsay was appointed commander-in-chief in the Mediterranean with his broad pennant aboard the Phaeton 38, Captain John Colpoys, and thereafter the Trusty 50, captained by the unfortunate Captain Martin Waghorn of the late Royal George. On two separate occasions he hosted the King and Queen of Naples aboard the Trusty, but after becoming ill with gout in 1784 he returned home in October.

He was raised to the rank of rear-admiral on 24 September 1787, one of sixteen officers especially promoted by Admiral Lord Howe in the dispute that would lead to that officer’s resignation as first lord of the Admiralty on 12 July 1788. In the course of the parliamentary debates on the subject Charles James Fox mentioned him as being an officer who could not have expected to command a fleet as he was too infirm to undertake such an onerous duty.

Lindsay died at Marlborough whilst journeying from Bath on 4 June 1788, and he was buried in Westminster Abbey.

He married Mary Milner, daughter of Sir William Milner, M.P. of Nunappleton Hall, Yorkshire, on 17September 1768 but had no issue. He had two illegitimate daughters and an illegitimate son from three different women. One of his daughters, Dido Elizabeth Belle, was born in 1761 to a West Indian slave, Maria Belle, and returned to England with Lindsay in 1765. She was housed and educated by his uncle, the Earl of Mansfield, an intimate of the royal family, and inherited money from both her father and her uncle. It is most likely that HMS Dido 28, ordered in June 1782 commissioned in September 1787, was named after her.

Lindsay was described as an amiable and excellent man, and the owner of some fortune. He was severely crippled in later years and had to be carried and lifted by a couple of servants. Both Viscount Keppel and Earl Howe were close friends of his, and the former left his sword, a walking stick, and a painting to Lindsay in his will.

My thanks to Mr E P Daly for pointing out the link between Lindsay’s daughter Dido and the frigate of that name, and also the close friendship between Lindsay and Viscount Keppel.