1735-1811. He was apparently the son of George Smith of Curzon Street, St. George, Hanover Square, a gardener at the palace, and of his wife Mary Jackson, a wet nurse to the future King George III who later became his laundress.

Smith was commissioned lieutenant on 12 June 1760 and promoted commander on 4 May 1761, joining the Hawk 10 in home waters and paying her off at the end of the following year. He was posted captain on 1 November 1762 and from January briefly commanded the Torrington 44 prior to her being sold off. 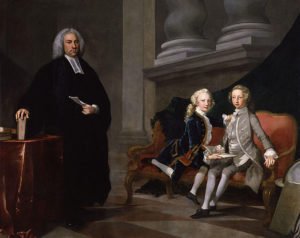 The most astonishing fact of Admiral Smith’s life was the fact that his mother was a wet nurse to the young George III, pictured on the right with his brother and a tutor.

From May 1763 and through the first three years of the peace he commanded the Squirrel 20, initially going out to the West Indies in August and then serving off North America from the following April in revenue protection. In 1764 he condemned the authorities at the troublesome Rhode Island for allowing another naval vessel to be fired upon during a dispute over stolen stock. The Squirrel was paid off in January 1767 and he recommissioned the Montagu 60 in February 1769, hoisting the broad pennant of Commodore Robert Man in the Leeward Islands in June and paying her off in October 1772.

After a short period of unemployment Smith recommissioned the Lark 32 in February 1776 and went out to North America in the spring. During August 1777 his second lieutenant, William Albany Otway, was captured by the American rebels whilst hunting in the Potomac, but he had returned to his ship by the end of September. The Lark served off North America during the remainder of 1777, and was beached and set on fire to prevent her capture by the French fleet during operations around Rhode Island in August 1778.

Smith did not see any further service but became a superannuated rear-admiral after his due date for advancement on 1 February 1793. He died on 26 January 1811.

He married Ann Gordon in 1762, who died in 1799, and by whom he had issue a number of children, one daughter marrying Admiral Edward Palmer, and another, his youngest daughter, marrying Admiral Alexander Wilmot Schomberg. His address was given as Poulton-cum-Secombe in Cheshire, and in the early 1770 s he purchased land and the Seacombe Ferry on the Wirral in Cheshire which facilitated access to a well-attended local horse-racing course.

His mother was a wet nurse to King George III, and the fact that one of Smith s sons died in a lunatic asylum and a daughter suffered from mental illness was attributed by some contemporary physicians to the madness of that monarch. Smith was highly regarded by the Americans for his humanity and decency, and when Ethan Allen was a prisoner aboard the Lark he enjoined the prominent rebel to share his table.