1766-1831. He was born in Finchley on 16 August 1766, the third and youngest son of the writer and merchant John Hope of Cragiehall, Linlithgow, who served as the M.P for Linlithgowshire from 1768-70, and of his wife, Mary Breton. A year after his birth his mother committed suicide. He was the brother of Lieutenant-General Sir John Hope and of Charles Hope, the politician who became the ennobled Lord Granton. He was also the nephew of Captain Charles Hope and the cousin of Admiral Sir Henry Hope and Rear-Admiral Sir George Johnstone Hope.

After an education at Edinburgh School Hope entered the navy in January 1777 aboard the sloop Weasel , serving off Africa under the command of his uncle, Charles Hope, whom he followed to the Hind 28 in November, going out to Jamaica. Further service with his uncle came aboard the Crescent 36 from the autumn of 1779 off Ireland, Guernsey and Lisbon, the Iphigenia 32 from December 1780 in the North Sea and at the Battle of the Doggersbank on 5 August 1781, and the Leocadia 36 from November 1781, employed at Newfoundland. 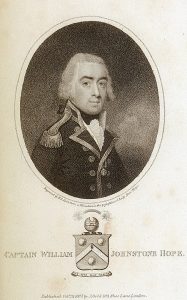 In September 1782 he joined the Portland 50, commanded by his kinsman Captain John Breton, the flagship of Vice-Admiral John Campbell at Newfoundland, and he was appointed a lieutenant of the Daedalus 32, Captain Thomas Pringle, in October, his commission being dated 10 November 1782, and in which vessel he saw further service at Newfoundland and on the Leith station until July 1784.

In January 1785 Hope was appointed to the Plymouth guardship Sampson 64, again under the command of his uncle, and bearing the flag of Vice-Admiral Mark Milbanke whom he served as flag-lieutenant. He moved to the Pegasus 28 in March 1786 at the express wish of her commander, Prince William, serving with him at Newfoundland, Halifax and in the West Indies, but in May of the following year, having fallen out with the prince, he became a lieutenant under Captain Horatio Nelson on the Boreas 28 in the Leeward Islands, returning with that frigate to England which was paid off at Sheerness on 30 November 1787. Although he was promptly selected to join the Victory 100, which had been commissioned by his uncle at Portsmouth, he was placed on half pay in December at the end of the Dutch Armament.

In early 1789 he joined the Adamant 50, Captain David Knox, the flagship of Rear-Admiral Sir Richard Hughes at Halifax, and in October was appointed acting-commander of the sloop Rattler 16, sailing out to Halifax once more in March 1790. During June he was appointed acting-captain of the Adamant in place of the sickly Captain David Knox, and although he was subsequently appointed acting captain of the Penelope 32 when Captain John Linzee resigned in November this position was never confirmed by the Admiralty and he brought the Adamant home from Nova Scotia in May 1792 to pay her off shortly afterwards. He had officially been promoted commander on 4 April 1791.

In July 1792, following his marriage, Hope took the additional name of Johnstone.

Prior to the commencement of the French Revolutionary War he recommissioned the fireship Incendiary 8 for the Channel during January 1793, participating in the fleet’s summer and autumn cruises, and after being posted on 9 January 1794 he became flag-captain to Commodore Thomas Pasley aboard the Bellerophon 74 six days later. He flew that officer’s rear-admiral’s flag at the Battle of the Glorious First of June, being one of those officers to be rewarded with a gold medal. During the battle his ship was exposed to a heavy attack from the French van due to the failure of the lead ship Caesar 80 to close with the enemy, and she had to be taken in tow by a frigate at the end of the engagement. She lost four men killed and twenty-seven wounded including Pasley, whose leg was shot off, and upon returning to Portsmouth her damage was such that she remained under repair until the end of August before rejoining the fleet.

After leaving the Bellerophon at the end of November 1794 Johnstone Hope was appointed temporary captain of the Tremendous 74 in March 1795 following the retirement of Captain William Bentinck, although almost immediately he was requested for his flag-captain by his fellow Scot, Admiral Adam Duncan, who had been given command of the North Sea station. During May he was a witness at the court-martial which examined Captain Anthony James Pye Molloy’s conduct at the Battle of the Glorious First of June, and he concurred that Molloy had ‘not exerted himself as he should have done’. He then joined Duncan aboard the Venerable 74, but in October 1796 was obliged to resign this position after receiving a blow to the head when visiting a Russian ship attendant on Duncan’s squadron.

Whilst he was recuperating Johnstone Hope directed the fitting out of ten gun-brigs at Leith, and on resuming his career in February 1798 he became flag-captain once more to Duncan, this time aboard the newly commissioned Kent 74. When the Dutch fleet in the Texel surrendered during the August-October 1799 campaign he was given the honour of carrying home Duncan’s despatches, arriving at the Admiralty on 2 September and being allocated 500 guineas by the King as a contribution towards a sword. At the same time he was awarded by Russia, becoming a Commander of the Order of St. John.

In March 1800 the Kent entered Sheerness before leaving at the end of May for the Downs, and in the following month she sailed to join the Mediterranean fleet. Johnstone Hope conveyed Lieutenant-General Sir Ralph Abercromby and his staff to Egypt from Gibraltar prior to the landings in Aboukir Bay on 8 March 1801, but he resigned his commission in June when Rear-Admiral Sir Richard Bickerton took the Kent as his flagship, and refusing the offer of becoming captain of the fleet to Admiral Lord Keith he returned home. For his part in the campaign he was rewarded by Turkey with the Order of the Crescent.

From May 1800-2 he was the M.P. for the Dumfries Burghs in the Dundas interest, and from November 1804-30 was the M.P. for Dumfriesshire. He briefly returned to active service from May to August 1804 when he commanded the cut-down Atlas 74 on the North Sea station, but he had to resign this commission through ill-health.

Johnstone Hope kissed hands with the King on becoming a lord of the admiralty under the Pittite Lord Mulgrave in April 1807, but he resigned in March 1809 to remain with his sick wife and father-in-law in Scotland. Thereafter he became ill himself, and his attendance of parliament reduced considerably. In the meantime he was appointed a colonel of marines on 1 August 1811, and on 12 August 1812 he was promoted rear-admiral.

He returned to naval service when he was appointed the commander-in-chief of the conveniently local Leith station in November 1813, retaining this position until September 1818 with his flag on the Latona 38, Captain Andrew Smith, until 1815, and then the Ramillies 74, Captain Thomas Boys. Created a K.C.B. on 2 January 1815, he was invested at Carlton House by the Prince Regent on 29 September.

On 12 August 1819 Johnstone Hope was promoted vice-admiral, and he was a member of the Admiralty Board from March 1820 in Lord Liverpool’s administration, taking up residence at Admiralty House but frequently visiting the country and Scotland with his second wife. He was nominated a G.C.B. on 4 October 1825, and on his retirement from the Admiralty in May 1827 he became treasurer of Greenwich Hospital in 1828, and thereafter a commissioner of the hospital in the following year. He was also appointed a privy councillor on the formation of Lord Grey’s administration on 24 November 1830.

After a long illness Johnstone Hope died on 2 May 1831 at Bath where he had gone seeking an improvement in his condition, and his remains were interred at the Johnstone Church in Dumfriesshire.

Following a protracted engagement he married his cousin Lady Anne Johnstone, the eldest daughter of the 3rd Earl Hopetoun, at Hopetoun House on 8 July 1792, by whom he had two daughters and four sons. One son, Sir William James Hope Johnstone, born on 28 July 1798, became a rear-admiral and two other sons, Charles James Hope Johnstone and George James Hope Johnstone entered the Navy, the former dying as a post captain aged 34 in 1835 and the latter dying as a post captain aged 41 in 1842. One of his daughters married Hon. Hugh Percy, who became a bishop and was the brother of Vice-Admiral Hon. Joceline Percy. Johnstone Hope’s first wife died on 28 August 1819, and on 30 October 1821 at St. James’ Church, London, he married Maria Eden, the widow of the 6th Earl of Athlone and thus the dowager Countess of Athlone. His address was Raehills, Dumfriesshire, and Portman Square, London

A man who was prepared to give straight answers, either good or bad, Johnstone Hope was a fair officer and a diligent member of the Board of Admiralty who refused to sign Captain Lord Cochrane’s dismissal from the service on the basis that he thought the sentence was unjust. When Prince William was his captain he described Hope as being ‘most violent, obstinate and quarrelsome’, yet he was later commended for his ‘urbanity of manner and benevolence of heart’. He was a fellow of the Royal Society. In parliament he initially supported William Pitt although his enthusiasm waned after his patron Dundas fell from grace and he was later most deprecatory, if nevertheless supportive, of the government. He remained popular with his constituents although at first he rarely visited them , nor indeed attended parliament.