1758-1844. He was born on 19 July 1758, the son of Lieutenant-Colonel Hon. Edmund Nugent, who was a groom of the bedchamber to the King, and the grandson of the Irish politician and poet, Earl Nugent. Following his father’s death in 1771 his marriage was declared illegal, and as such Nugent and his elder brother, who became Field-Marshal Sir George Nugent, were stigmatised as illegitimate, although they did inherit land in County Meath, Ireland.

In 1771 Nugent entered the service aboard the sloop Scorpion, Captain Hon. George Keith Elphinstone, removing to the Trident 64, Captain Charles Ellys, the flagship of Rear-Admiral Sir Peter Denis in the Mediterranean a year later. He then joined the frigate Cerberus 32, Captain James Chads, in which he went out to North America in 1775. After returning to England he joined the Bristol 50, Captain John Morris, flying the broad pennant of Commodore Sir Peter Parker, and he was an acting lieutenant at the unsuccessful attack on Charleston on 28 June 1776, being wounded in the action. He was commissioned lieutenant with seniority from 3 June and he served with Parker in the New York campaign during July – October before following this officer to the Chatham 50, Captain Tobias Caulfield, in the autumn for his subsequent transfer to the Jamaican station as commander-in-chief.

Nugent was promoted to the rank of commander on 26 May 1778, even though his lieutenancy had not yet been confirmed by the Admiralty, and for the best part of a year he commanded the Porcupine 16 at Jamaica whilst concurrently, and unusually, another vessel of the same name was serving in home waters. In April 1779 he was appointed to the Hound 14 for a short period, and on 2 May was posted captain by the promoted Vice-Admiral Sir Peter Parker to replace his son, Captain Christopher Parker, on the Hinchingbrooke 28. Again, his tenure of command was of but a short duration, for on 11 June he was succeeded aboard the Hinchingbrooke by the newly posted Captain Horatio Nelson and instead joined the Pomona 28, which had recently been vacated by Captain Hon. William Waldegrave. 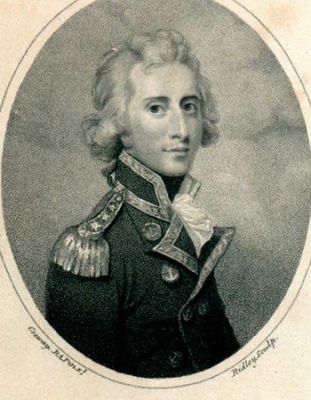 Nugent was promoted to the rank of commander on 26 May 1778, even though his lieutenancy had never been confirmed by the Admiralty, and he was posted to the Pomona 28 on 2 May 1779. Remaining on the Jamaican station he served in the Omoa

Remaining on the Jamaican station, Nugent served in the campaign to capture two Spanish Register ships at Omoa from September – October 1779 under the orders of Captain John Luttrell. Prior to the commencement of that expedition he was dispatched to St. George’s Key in the Bay of Honduras aboard the schooner Racehorse to procure pilots for the assault, but following a skirmish with some Spanish gunboats was taken prisoner, handcuffed, stripped, threatened with execution and thrown into a dungeon. On the following day the Pomona arrived after being sought out by the Racehorse, whereupon the Spanish scattered and Nugent and the crew of the schooner’s boat were able to make good their escape. The Pomona returned to Kingston with the two captured Spanish Register ships on 22 January 1780.

Having escorted a homeward-bound packet out to safe waters, the Pomona fell in with Captain Hon. William Cornwallis’s squadron which had a running engagement with a superior French force in the Windward Passage on 20-22 March 1780, although the French eventually shied away from an engagement. She subsequently survived the Great Hurricanes of October with the loss of just a mizzen mast, and it was later reported that in October 1781 the Pomona, in company with the Ulysses 44, Captain John Thomas, fell in with a convoy of French transports under the escort of a frigate and drove two ships and a sloop ashore. Nugent remained on the Jamaican station until the summer of 1782 when he returned home with Vice-Admiral Sir Peter Parker aboard the Sandwich 90 to arrive at Portsmouth on 29 July.

In 1784 he was elected the M.P for Buckingham, and he sat in the interest of the government until 1790 when he was obliged to resign his seat to his elder brother on account of his ill-health.

Following the start of the French Revolutionary War in 1793 Nugent commissioned the new Veteran 64 in March, going out of Portsmouth to Spithead on 4 May and taking part in the fruitless Channel fleet cruises of July- August and October-December, including the chase of Rear-Admiral Vanstabel’s squadron on 18 November.

The Veteran then formed part of Vice-Admiral Sir John Jervis’ campaign in the Leeward Islands from January 1794. Nugent led a division of boats in the attack on Fort Louis, Martinique, where he was one of the first to scale the ramparts, and following its capture he was temporarily made governor of the town of Fort Royal. He later spent some time ashore in command of the naval battalions at the reductions of St. Lucia and Guadeloupe, and he returned home with despatches following the surrender of the latter island to arrive at the Admiralty on 25 May.

In December 1794 he was appointed to the Gibraltar 80 in succession to Captain John Pakenham whose health was so precarious that he was expected to die, but who was walking aboard the ship two weeks later, so instead in January Nugent took command of the Caesar 80 when Captain Anthony Molloy asked to be superseded pending his request for a court-martial into his conduct at the Battle of the Glorious First of June. Nugent sat on the court-martial which concluded after two weeks on 15 May, and although he had been nominated to fit out the captured French sail of the line Pompée 80 for the Channel fleet he returned to the Caesar at Portsmouth on 28 May when Molloy was pronounced to be desperately ill.

With Molloy subsequently announcing his retirement from the service Nugent remained with the Caesar in the Channel Fleet, and he sat on another notable court martial, that of Vice-Admiral Hon. William Cornwallis, in April 1796. He eventually left the Caesar upon his promotion to rear admiral on 20 February 1797, whereupon he was presented to the King two days later.

In August 1797 Nugent was returning to London with his wife and Lady Young, together with two servants, when his coach was surrounded by nine pistol-wielding footpads near Egham in Surrey. Entreating and receiving respect for his fellow passengers, he managed to persuade the footpads to put down their weapons, but the party was still robbed off fifty guineas, all their possessions and baggage. Taking a position in society whilst remaining unemployed at sea, in April 1798 he attended the Lady Mayoress’ ball in London, and by June was at Glasgow with his wife. He was advanced to the rank of vice-admiral on 1 January 1801, and on 18 December attended the King at a levee at St. James’ Palace.

Continuing to remain unemployed following the resumption of hostilities with France in 1803, Nugent attended the Queen in June, and presented his stepson, Captain Sir John Louther Johnstone of the Coldstream Guards, to the King at a levee in the winter. In June 1805 he returned to service when appointed captain of the fleet to Admiral Hon. William Cornwallis in the Channel, and he arrived at Plymouth from London on 29 June to expedite the fitting out of the flagship Ville de Paris 110. After relinquishing this appointment some months later, he saw no further service, although he did officiate at Vice-Admiral Lord Nelson’s funeral on 9 January 1806.

Returning to ‘Society’ he was promoted admiral on 28 April 1808, upon which occasion he was again presented to the King. In November of that year he had to bail out his errant stepson after he had been arrested for accepting a challenge. During June 1809 he attended a huge royal event to celebrate the King’s birthday, and in October visited the Hotwells in Bristol.

After the war, and by now a widower who until her marriage in 1822 often had his daughter in tow, Nugent continued to be a ‘fashionable arrival’, leading member of society and traveller, as illustrated by his tour of Dumfriesshire in the autumn of 1816, and his frequent appearances in London and Weymouth. He succeeded Admiral Lord Gambier as the admiral of the fleet on 24 April 1833, was nominated a G.C.H. on 12 March 1834, and on 8 July 1837 he officiated at the funeral of King William IV. In October 1842 he suffered a broken thigh after slipping on a kerb stone whilst viewing the erection of the Nelson Monument in Trafalgar Square, and he was taken into a private ward at the nearby recently established Charing Cross Hospital where he remained until the end of the following January.

Admiral Nugent died on 7 January 1844 at the home of his son in law, George Bankes M.P in Studland, Dorset, and he was buried in the local graveyard. At the time of his death he was the senior admiral in the Navy and his brother was the senior general in the Army.

On 2 July 1790 by special licence he married Deborah Charlotte Dee, the widow of Commodore George Johnstone, who was described as a ‘foreign lady’, having been born in Lisbon to an Englishman. She died in London after a long and painful illness on 20 May 1813, having had issue with Nugent one daughter, Georgiana Charlotte. Her son, Sir John Louther Johnstone, had a troubled life, for after leaving debts in Scotland he ran with a roguish set in London before entering parliament in 1810, only to die in the following year, aged 28. Nugent resided at various properties in London to include Wigmore Street, Upper-Brook Street and Bryanstone Square, and in addition to property in Ireland he had country residences at Gosfield, Essex and in later days lived near Shaftesbury in Dorset.

Ostensibly a supporter of William Pitt during his brief time as an M.P, Nugent nevertheless voted against the government as his conscience dictated, although he never spoke in Parliament.