On 3 September 1785 Hamond entered the navy as a captain s servant aboard the Irresistible 74, bearing his father s broad pennant at the Nore, and he remained on the ship s books until March 1790, transferring thereafter with his father to the Vanguard 74, and the Bedford 74 in 1791.

In January 1793 he joined the Phaeton 38, Captain Sir Andrew Snape Douglas, in which he earned a great deal of prize-money as a midshipman during the first few months of the war, the frigate s captures including the General Dumourier 22 and her prize the Spanish galleon St. Jago carrying merchandise to the value of 1,000,000. In April 1794 he removed with Douglas to the Queen Charlotte 100, which vessel flew Admiral Lord Howe s flag at the Battle of the Glorious First of June. Further service was aboard the Aquilon 32, Captain Robert Barlow, and Zealous 74, Captain Christopher Mason, following which he travelled down through Europe to join the Britannia 100, Captain John Holloway, the flagship of Admiral William Hotham in the Mediterranean, in which he was present at the Battle of Genoa on 13 July 1795. 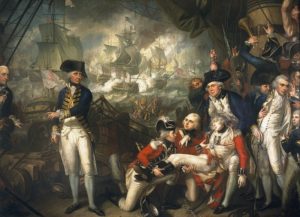 Hamond was promoted lieutenant on 19 October 1795, being employed in the Mediterranean aboard the Aigle 38, Captain Charles Tyler, which for a short time served as the flagship of Vice-Admiral Sir Hyde Parker, and at Lisbon aboard the Niger 32, Captain Edward Foote, before returning to home waters.

He was promoted commander of the new Echo 18 on 20 October 1797, in which he took part in the blockade of Le Havre, in convoy duty, and in the capture of thirty Dutch fishing vessels.

Hamond was posted captain on 30 November 1798 and removed to the Champion 24, in which he took a convoy out to the Elbe from Sheerness in March 1799 and thereafter remained on station before taking a cruise off Norway. On 28 June he captured the prolific Dunkirk privateer Anacr on 16 in the North Sea He conveyed specie from the Thames to the British forces in the Netherlands during the August-October campaign, and on 31 October returned to Yarmouth from the Helder with the Duke of Gloucester. In March 1800 he escorted a convoy from Portsmouth to the Mediterranean, where he transported the crew of the Guillaume Tell 80 to Minorca following that vessel s capture on 31 March. Thereafter he took part both at sea and ashore in the siege of Valetta before exchanging into the Lion 64 in July and bringing her home with despatches.

Having completed the paying-off of the Lion on 18 November 1800, Hamond began fitting-out the new frigate Blanche 36 at Deptford the next day, and he subsequently joined the fleet under Admiral Sir Hyde Parker that was sent to the Baltic to confront the Armed Neutrality in the spring of 1801. His frigate took Hon. Nicholas Vansittart in to Copenhagen to attempt to negotiate a peaceful solution with the Danes, and when those talks failed he evacuated the British ambassador. The Blanche was present at the ensuing Battle of Copenhagen on 2 April, losing seven men killed and nine wounded, and Hamond had the honour of holding Vice-Admiral Lord Nelson s prayer book on the occasion of his giving thanks to God for the victory a week later. When Parker was recalled it was Hamond s frigate that took him home, and after further service in the Channel, in attendance on the King at Weymouth, and on patrol in the preventative service off Devon and Cornwall, the Blanche was paid off on 22 September 1802.

In February 1803 Hamond joined the new Plantagenet 74 which he commissioned at Plymouth for service in the Channel, and on the resumption of war with France he captured two privateers, the Courier de Terre Neuve 16 on 24 July and three days later the Bordeaux privateer corvette Atalante 22, the latter having out-ran the Rosario 10, Captain William Mounsey. The Plantagenet s success was attributed to the fact that her identity as a ship of the line was disguised by her lack of a poop-deck.

Further ill-health necessitated a period of half pay from November 1803 before Hamond commissioned the new frigate Lively 38 at Woolwich on 30 July 1804. Given his connections it was unsurprising that he was sent to participate in the planned capture of the Spanish treasure frigates on 5 October, where in receiving the surrender of the Clara 34, and assisting the Medusa 32, Captain John Gore, in the capture of the Fama 34, he lost two men killed and five wounded. He later had the good fortune to be present at the capture of another treasure ship, the San Miguel on 7 December off Cape St. Vincent, her value being estimated at over $200,000, whilst on the very same day he assisted the Polyphemus 64, Captain Robert Redmill, in the capture of the Santa Gertruyda 36, which was laden with a precious cargo and over $1,215,000 in specie. The Lively delivered the whole sum amounting to almost $5,000,000 to England, and even though freight-money was no longer to be paid, and that Droits of Admiralty meant that only a quarter of the prize sum was rewarded to the officers and men of the Lively and Polyphemus, he still pocketed a pretty penny. 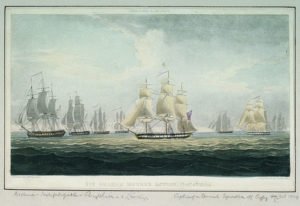 Continuing on the Lively, Hamond fought a spirited action with the Spanish sail of the line Glorioso 74 off Cadiz on 29 May 1805, and later in the year he conveyed General Sir James Craig to Naples which was under threat of a French invasion. He eventually left the Lively in June 1806 suffering from ill-health.

After a long period of recuperation he was appointed in December 1808 to yet another new ship, the sail of the line Victorious 74, which he commissioned at Portsmouth for service in home waters. He later served in the Schelde Expedition from July 1809, but resigned the command in September. Apart from a brief period commanding yet another new vessel, the Rivoli 74 in the Mediterranean from May 1813 to March 1814, Hamond spent his time ashore on invalidity pay.

On 4 June 1815 he was nominated a C.B. and he returned to active service with his appointment to the Wellesley 74 on 30 March 1824, in which he transported the diplomat, Lord Stuart de Rothesay, to Brazil later that year. He was promoted rear-admiral on 27 May 1825, and he returned to England in the Spartiate 74 via Portugal where he had delivered the treaty of the separation of Brazil to the King, and had been rewarded by the Portuguese court.

On 12 September 1828 he succeeded his father as a baronet, but the opportunity of assuming the chief command in India was negated by his continuing poor health. He was created a K.C.B. on 13 September 1831, and from September 1834 was the commander-in-chief in South America in succession to the late Rear-Admiral Sir Michael Seymour, taking passage in the following month aboard the Talbot 28, Captain Follett Walrond Pennell, and raising his flag on the Spartiate 74, Captain Robert Tait, who had briefly commanded the station pending his arrival. He removed in June 1835 to the Dublin 50, Captains Charles Hope and George Willes, and departed Rio de Janeiro in March 1837 to arrive at Portsmouth in May.

He married Elizabeth Kimber of Fowey, Cornwall in that town on 30 December 1806 on a special licence and the couple had two sons, Andrew Snape Hamond, born on 3 October 1811, who entered the navy in 1824, served as his father s flag-lieutenant in South America from 1834, and eventually reached the rank of vice-admiral, and Graham Eden Hamond, born on 3 March 1814 at Fowey, who entered the service on 22 February 1828 and died on 23 January 1847 at Woolwich whilst commander of the steam-ship Medea. He also had three daughters, the second of whom married into the Hood family.

Needless to say, Hamond s captures of the Spanish treasure ships in the early years of the Napoleonic War left him very rich, and the fact that his frigate was selected for those missions, coupled with a history of plum appointments, illustrated the patronage he enjoyed through his father s position. Politically he was a Whig.