Having undertaken an education at the Royal Naval Academy in the early 1730’s, Wheelock was commissioned lieutenant on 26 June 1741, and from 1746 served on the fireship Duke, Commander Robert Coleman, acting as her commander in the absence of that officer until August 1747.

He was promoted commander of the ill-sailing sloop Fly 8 on 19 February 1756, which vessel was at Portsmouth in the spring, and which also saw employment in the Downs. From 10 January until 5 May 1757 he had the Stork 10, which was fitting out at Portsmouth, although he left her before she sailed for Jamaica in the early summer. 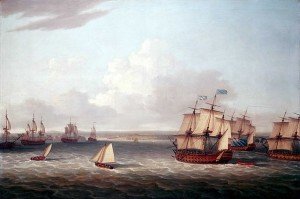 Wheelock was posted captain of the Squirrel 20 on 21 December 1757, and he was sent to New York in the early part of 1758 with orders for the recall of the Army commander-in-chief, General Lord Loudon. His command was thereafter employed in escorting troops from Philadelphia to Halifax in June, and at the siege of Louisburg under Admiral Hon. Edward Boscawen during June-July.

Remaining on the North American station, Wheelock commanded the Pembroke 60 from May 1759 in succession to the late Captain John Simcoe, participating in the siege of Quebec in the summer, and in operations in the St. Lawrence under Commodore Lord Colville during the following year. At this time, the future explorer of note, James Cook, was employed as the sailing master of the Pembroke.

In December 1760 the Pembroke arrived at Spithead with a convoy from Newfoundland, and after sailing for Jamaica from Portsmouth with a convoy in March 1761, she endured an uneventful remainder of the year in the Caribbean. In January 1762 she intercepted a schooner with letters for the French secretary of state indicating that the Spanish and French allies were planning an attack on Jamaica, and in August she served at the reduction of Havana where Wheelock helped superintend the landings. On 10 November she arrived at Kingston with Commodore Hon. Augustus Keppel’s squadron and eight valuable French prizes, and she remained on the Jamaican station until sailing for the Leeward Islands in early 1763, where she came under the orders of Vice-Admiral Sir George Rodney. The Pembroke returned to Portsmouth later that year and was paid off on 22 February 1764.

On 16 August 1770 Wheelock was appointed to the guardship Achilles 60 at Portsmouth, which briefly flew the flag of the commander-in-chief, Vice-Admiral Francis Geary. In November she set sail for Ireland with a small squadron to embark troops for Gibraltar but was driven back to Portsmouth with two other sail of the line after encountering a heavy storm off the Start which saw her lose her fore and main yards and mizzen topmast. Such was the damage that she had to be docked, and it was not until 29 January 1771 that she came out of Portsmouth Harbour. She thereafter remained at Spithead for the next few months under orders for the West Indies.

On 9 April 1771 Wheelock was appointed to the Modeste 64, which he took out of Portsmouth to Spithead on 10 May, and which sailed for Jamaica with Vice-Admiral Sir George Rodney’s squadron nine days later. Following their arrival at Port Royal on 23 July, the Modeste was dispatched to keep a watch on the Spanish Main. On 18 April 1772 she arrived at Port Royal from a cruise off Cartagena where she had struck an unknown reef and remained grounded for forty hours, having lost her false keel and jettisoned a portion of her stores and several guns. Her return to Portsmouth in September saw a group of her men, liquored up near Portsmouth Point, cut down and fatally wound a marine before breaking the windows of the Fountain Inn and gaining entrance. They were eventually detained by a guard of soldiers and imprisoned. Meanwhile, the Modeste was paid off at Portsmouth in October.

In November 1777, Wheelock joined the newly commissioned Sultan 74 at Sheerness, in which he sailed down to Blackstakes in early December. At the end of March 1778, she hoisted Vice- Admiral Mathew Buckle’s flag in the Downs before departing on 7 April for Spithead. She subsequently formed part of Vice-Admiral Hon. John Byron’s fleet that went out to North America on 9 June, arriving at Sandy Hook under Rear-Admiral Hyde Parkers orders on 28 August after horrendous storms had dispersed the fleet.

Captain Wheelock died whilst still in command of the Sultan, the date of his death probably being 14 November 1778, and he was succeeded by Captain Charles Fielding.

He was unmarried, and the executor and main beneficiary of his will was his brother, Anthony Wheelock, of Yarmouth on the Isle of Wight.