1760-1842. He was born in Greenwich, the son of William Taylor, who held a medical appointment at Greenwich Hospital, and of his wife, Grace Fletcher.

Taylor was a midshipman in Captain James Cook’s third voyage of discovery which saw the murder of the great explorer on 14 February 1779, and shortly after his return to England he was commissioned lieutenant on 28 October 1780.

He was promoted commander of the sloop Pelican 16 on 21 January 1783, prior to paying her off at Sheerness in April, and almost immediately he recommissioned the Falcon 14, whose captain, Benjamin Ruawa, had recently suppressed a mutiny that had broken out whilst her men were waiting to be paid off at the same port. In the event Taylor did not take the Falcon to sea before he exchanged with Commander Velters Berkeley into the sloop Cygnet 14 at the end of July, which vessel arrived at Portsmouth from the Downs in September. By December she was back at Sheerness.

At the beginning of 1784 the Cygnet sailed for the East Indies with dispatches, although after visiting Madeira in early February she was not heard of for several months, thereby causing some concern back in England that she may have been lost. When she did finally arrive on the East Indian station she carried dispatches to and from Madras to Calcutta. On 15 January 1786 she departed Madras in company with the Bristol 50, Commodore Charles Hughes, and Active 32, Captain Simon Mackenzie, reaching the Cape on 2 March. The three vessels remained here for some weeks whilst many of the men recovered from scurvy, and after they eventually reached Portsmouth in early July the Cygnet was paid off at Sheerness later that month. 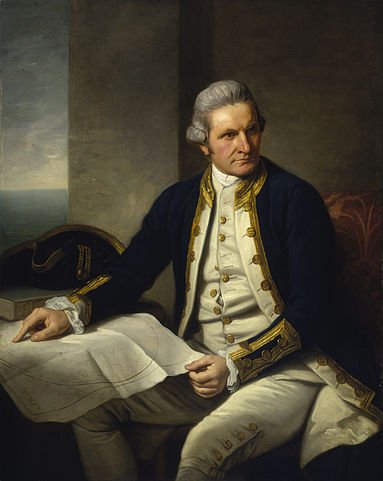 Admiral Taylor had few opportunities for distinction during his career, but at the time of his death was heralded as being the last officer to have sailed with Captain Cook – here portrayed.

Taylor was fortunate enough as to obtain a further peace-time employment when ordered to commission the Thorn 14 in January 1788 for service in the Shetland Isles. During January 1789, shortly after his vessel had intercepted a large smuggler off the Yorkshire coast, he brought a court martial against his senior lieutenant, Charles Thackeray, for a number of offences including that of personally insulting him, and calling him a ‘scoundrel and liar’. There being an absence of witnesses to the altercation, legal clarification was required before Taylor could undertake the roles of both prosecutor and witness, and after a four-day examination of the facts Thackeray was found guilty on 17 January and reduced to the rank of midshipman. Clearly the Thorn was not a happy ship, for shortly afterwards further court-martials were held aboard the Edgar 74 at Portsmouth on the quartermaster and several seamen from the Thorn for desertion and other misdemeanours. Taylor retained the command of the Thorn through the Spanish Armament of 1790 before leaving her in March 1791.

Upon the outbreak of war with France in 1793 he was appointed to recommission the Weazle 14 in March for service in the Channel and North Sea, and he subsequently sailed from Portsmouth for the Mediterranean with Vice-Admiral Lord Hood’s fleet on 22 May, prior to returning from Gibraltar with the homeward-bound trade and going out from Spithead on a cruise in July.

Taylor was posted captain on 24 September 1793 and appointed to commission the French prize Prompte 24, which had been captured in May off the Spanish coast by the Phaeton 38, Captain Sir Andrew Snape Douglas. Receiving on board at Spithead a large draft of seamen who had just returned from India aboard the Minerva 38, Captain John Whitby, the Prompte was harboured at Portsmouth during the early winter. In the summer of 1794 she undertook convoy duty from the Nore and saw service out of the Downs, and in July-August she assisted in the escort of nineteen transports containing Scottish troops from Fort George to Southampton. In November she sailed for Bergen to monitor a French squadron in the company of the sloop Pylades, Captain Thomas Twysden, but the two vessels parted company in a storm two days later. Whilst the Prompte returned safely to Leith, the Pylades was driven onto a sandbank in the Shetland Islands to save her from foundering and she was later salvaged and restored to the Navy.

In June 1795 Taylor transferred to the frigate Andromeda 32, in which he escorted thirty-five trade ships to Elsinore in the company of the Ambuscade 32, Captain George Duff, and Black Joke lugger, bringing home another convoy to arrive at Yarmouth on 7 July after a three-week passage. She then returned to the Baltic with another convoy, bringing home the inward-bound trade in August, in the course of which voyage she assisted in the detention of two Danish ships bound for France with naval stores. She continued to serve in the North Sea under the orders of Admiral Adam Duncan, and towards the end of September sailed from Deal, reaching Portsmouth in early October and then proceeding to Plymouth. By November the Andromeda was back at Elsinore waiting to bring home the trade with the Ambuscade and several sloops, and she experienced terrible weather on the return voyage before putting into the Humber in mid-December.

In January 1796 the Andromeda led the ships in the Humber in celebrating the Queen’s birthday, but she was detained in the roads by poor weather for the rest of the month before finally getting away in mid-February to join the squadron at Leith. On 6 March she was sent to the Firth of Forth in company with the brig Kite 16, Commander Micajah Malbon, and the sloop Ranger 16, Commander James Hardy, to take possession of the Batavian frigate Zefir 36, which struck her colours after firing one shot of honour, her crew of two hundred and thirty men being taken to Edinburgh Castle. Towards the end of the month the Andromeda sailed from Leith in search of several enemy privateers but she returned to port empty-handed shortly afterwards, and on 12 April she arrived at Sheerness with the Zefir in company, whereupon she entered dock to repair damages.

At the end of May 1796 the Andromeda departed Portsmouth for Newfoundland with a convoy and Vice-Admiral Sir James Wallace’s flagship Romney 50, Captain Frank Sotheron, although she soon returned to Plymouth on 18 September after a mere ten-day passage to bring news of the arrival of a French squadron off Newfoundland under Rear-Admiral Joseph De Richery. In October Taylor received orders to take on board the Tunisian ambassador and return him to that country, and by the beginning of November the Andromeda was going down the Channel with the Gibraltar convoy, from where she returned to England.

In the early part of 1797, the Andromeda sailed for Halifax from Portsmouth, completing the passage in fifty-two days, and in June was reportedly in the Hampton Roads, Virginia. Shortly afterwards she carried two rich Spanish prizes into Halifax, and after returning to England she sailed from Portsmouth with the West Indies convoy of one hundred sail to arrive at Barbados in February 1798, prior to setting out for Lisbon. At the end of November she arrived in the Downs with the Quebec convoy, and on 10 December she departed for Sheerness. Here, in January 1799, she hosted a court-martial that convicted Lieutenant Robert K Piercey of the gun-boat Louisa of defrauding several of his men of their bounty money, the officer’s sentence being two years imprisonment in the Marshalsea and dismissal from the Navy. Shortly afterwards Taylor left the Andromeda.

In the spring of 1799 he was appointed to the Magnanime 44, cruising out of Plymouth that year and being present in Torbay with the Channel Fleet during September and again in October. In early November his command struck ground on the Needles whilst sailing for Spithead but was got off without too much damage, and she then went out on another cruise.

In February 1800 the Magnanime departed Portsmouth with the East India and Africa trade under the orders of Captain Sir Charles Hamilton of the Melpomene 38, and she was present at that officer’s capture in April of the strategic island of Gorée. Sailing thereafter to the Leeward Islands, the Magnanime eventually departed Martinique with a hundred sail West India convoy on 19 November 1801. Whilst crossing the Atlantic this fleet was dispersed in particularly severe weather, and when Taylor’s command reached home in January 1802 the majority of her crew were too sick for duty through scurvy and dysentery, her pumps were choked, and those men who were fit were baling her out with buckets. Such was her condition that she was run directly into Plymouth dock where her men were paid off in the following month.

Admiral Taylor died on 19 July 1842 at his residence in Greenwich at the age of 82, it being reported that he had been the last surviving officer to have sailed with Captain Cook. He was interred in the family vault under the Church of Saint Alphage, Greenwich, being adjacent to the vault containing, General James Wolfe.

His residence in retirement was at Maze Hill, Greenwich. By his wife, Isabella, he had at least one daughter, Grace, who in 1814 married William Padwick, a future lord of the manor on Hayling Island.