1758-1807. Born in Exeter and baptised on 11 May 1758, he was apparently descended from the French royal family, being the son of John Louis, a teacher and dancing master who traced his ancestry back to an illegitimate son of King Louis XIV. His mother was Elizabeth Atkinson. 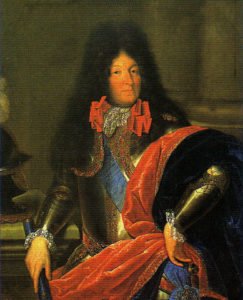 Sir Thomas Louis was allegedly a descendant of King Louis XiV of France, the ‘Sun king’.

In 1769 Louis entered the navy in home waters aboard the sloop Fly, Captain Mitchell Graham, and in 1771 he joined the frigate Southampton 32, Captain John MacBride, which was also employed in home waters. He moved with MacBride to the Orpheus 32 in April 1773, and from 1774 was aboard the Kent 74, Captain Charles Fielding. June 1775 saw him move to the sloop Martin, Captain William Parker, going out to the Newfoundland station, and from the following January he was once more with Captain Graham aboard the new Thetis 32, sailing for the South Atlantic to bring home the East India trade.

Louis rejoined Captain MacBride upon being promoted lieutenant of the Bienfaisant 64 on 18 July 1777. In this ship he fought at the Battle of Ushant on 27 July 1778, and served in the Channel Fleet s strategic retreat of August 1779. The Bienfaisant next joined Admiral Sir George Brydges Rodney s fleet for the relief of Gibraltar, and a week prior to the defeat of the Spanish fleet in the Moonlight Battle on 16 January 1780 he took possession of the Guipuscoana 64 when she struck to the Bienfaisant after her convoy had been intercepted to the north-east off Cape Finisterre. He was next appointed prize-master of the badly damaged Spanish flagship Fenix 80, which struck to the Bienfaisant during the Moonlight Battle, and despite the terrible weather he succeeded in getting her to Gibraltar. Once she was fit to be sent to England Rodney awarded him with the acting command of the Fenix, which had been renamed the Gibraltar, but sadly the Admiralty did not confirm his promotion when he arrived home and so he returned to the Bienfaisant. On 13 August he was aboard this vessel at her capture of the privateer Comte de Artois off Kinsale, and in January 1781 he moved with Captain MacBride to the Artois 40.

Finally, on 9 April 1781, Louis won his deserved promotion to the rank of commander, being appointed to the armed vessel Mackworth, and serving off the Irish coast and on convoy duty to South Wales. Having later been made responsible for the impressment service at Sligo he was posted captain on 20 January 1783.

For the next few years he lived in Torquay, and he was not re-employed until the resumption of hostilities in 1793 when he joined the frigate Quebec 32 as flag captain to the promoted Rear-Admiral MacBride in the Downs. Shortly afterwards he moved with his old patron into the Cumberland 74, which he was able to man with many volunteers from his home county of Devon. He participated in the Channel fleet cruise of July-August and then accepted the flag of Rear-Admiral Benjamin Caldwell which he carried in the cruise from October – December.

In March 1794 Louis commissioned the new Minotaur 74 with the flag of Vice-Admiral John MacBride in the Channel, but at the time of the Battle of the Glorious First of June he was with Rear-Admiral George Montagu s detached squadron. He flew MacBride s flag once more in 1795, and early in the same year briefly flew the flag of Rear-Admiral Hon. William Waldegrave when that officer commanded a squadron in the Western Approaches. For a week in August he was temporarily replaced by Captain Hon Charles Jones, and having been employed in a convoy run to the Leeward Islands and back between April and July 1796 he served with Vice-Admiral John Colpoys squadron off Ushant. 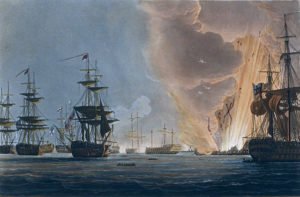 The Minotaur was present at the Spithead mutiny that erupted on 16 April 1797, and she was afterwards despatched to the Mediterranean fleet off Cadiz, where somewhat surprisingly for a ship that had served for so long in what was considered to be the ill-disciplined Channel fleet she was detached by the commander-in-chief, Admiral Lord St. Vincent, with the reinforcements under Captain Thomas Troubridge in May 1798 to join Rear-Admiral Sir Horatio Nelson s flying squadron in the Mediterranean. On 1 August Louis commanded the Minotaur at the Battle of the Nile where his ship provided excellent support to Nelson s Vanguard, and he was later called aboard the flagship by the emotional admiral to be proffered thanks. Nelson later claimed that Louis arrival had turned the course of the battle, albeit that it had cost the Minotaur casualty figures of twenty-three men killed and sixty-four wounded. Having been despatched from Egypt with the French prizes under the orders of Captain Sir James Saumarez, Louis served with the blockading force off Malta that autumn.

During 1799 Louis commanded the Minotaur on the coast of Italy, joining Troubridge s campaign from June-September which attempted to resist the French invasion despite the ineffectiveness of the Neapolitan army. He was able to force the surrender of the fortress at Gaeta, was honoured by the Kingdom of the Two Sicilies, and for a short period became the effective governor of Rome after rowing up the River Tiber and hoisting British colours on the Castell San Angelo. He later served under Nelson in the chase of the Brest fleet following its breakout on 25 April.

Subsequent to the destruction of the Queen Charlotte 100 by fire on 17 March 1800 the Minotaur flew the flag of Vice-Admiral Lord Keith from April to August, being present at the capture of Genoa on the 4 June, and only just escaping capture by warping out of the harbour after the French had occupied the port. On 3 September Louis directed an attack upon two Spanish corvettes off Barcelona, and continuing with the Mediterranean fleet he was present at the landings in Egypt on 8 March 1801. With hostilities coming to an end the Minotaur was paid off at Chatham on 3 March 1802 and Louis went on half-pay, having been honoured by both Austria and Turkey for his services in the Mediterranean.

When war broke out once more he commissioned the brand new Conqueror 74 in March 1803, and on 23 April 1804 he was advanced to flag rank, the list of promoted officers being extended to include him. With his flag flying off Boulogne aboard the Leopard 50, Captain Francis Austen, he commanded a squadron of up to twenty vessels as part of Admiral Lord Keith s home defence force. 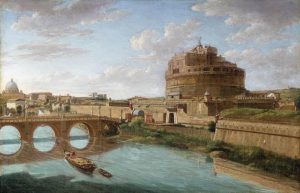 In March 1805 he took passage aboard the frigate Ambuscade 32, Captain William Durban, to join Nelson s fleet in the Mediterranean as a replacement for Rear-Admiral George Campbell who had apparently suffered a nervous collapse. Shifting his flag into the Canopus 80, Captain Francis Austen, which as the Franklin had been captured at the Battle of the Nile, he sailed with the fleet to the West Indies following the French breakout on 29 March and subsequently joined the blockade off Cadiz. To his immense despair he missed the Battle of Trafalgar on 21 October, having been despatched in command of five sail of the line to Tetuan to replenish stores.

In November he was succeeded in command of the squadron off Cadiz by Vice-Admiral Sir John Duckworth, and he fought under this officer in the defeat of a division of the Brest Fleet at the Battle of San Domingo on 6 February 1806. The Canopus was heavily engaged in the action, during which she forced the French flagship aground, and she suffered casualties of eight men killed and twenty-two wounded. Louis was rewarded with a baronetcy on 1 April, but Duckworth received no honours and instead was reprimanded for leaving his blockade of Cadiz to chase a squadron from another station.

The Canopus underwent a refit at Plymouth in the summer, and thereafter, with Thomas Shortland as his flag-captain, Louis briefly commanded a squadron off Belle-Isle to keep watch on Admiral Willaumez. Whilst in the Bay of Biscay his squadron captured the French frigate Pr sidente 40 on 27 September 1806, the honour for the capture going to the brig Dispatch 18, Captain Edward Hawkins, which had engaged her superior opponent and inflicted enough damage for the Canopus to come up and enforce her surrender.

Louis next returned to the Mediterranean fleet under the command of Vice-Admiral Lord Collingwood off Cadiz, and despite suffering the effects of a fever caught in the West Indies the year before he was sent to the Turkish coast to reconnoitre that country s defences. Having made a rendezvous with Vice-Admiral Sir John Duckworth off the island of Tenedos he served under that officer in his attempt to force the Dardanelles in February 1807, and in the course of the retreat from Constantinople the Canopus felt the full force of the Turkish stone shot.

After returning to the Mediterranean Louis was sent to command a squadron off the coast of Egypt following the surrender of Alexandria on 21 March, but he died in the harbour on board the Canopus from an inflammatory illness on 17 May 1807. His body was returned to Malta where it was given a military funeral by his old friend, Alexander Ball, and was buried on Manoel Island, Sliema near the grave of General Sir Ralph Abercromby.

In 1784 Louis married Jacquetta Belfield of Primley House, Paignton, with whom he had issue three daughters and four sons, the eldest of whom, Sir John Louis, entered the service with his father aboard the Minotaur in September 1795, was posted captain on 22 January 1806, and eventually became an admiral. Another son, Matthew, became a lieutenant-colonel in the army, and a third son, Charles, died at Torquay as a naval commander in 1834. Louis purchased Cadwell House near Newton Abbot, Devon in 1802, having always lived in the region.

Louis was a great friend of Nelson and Lady Hamilton, but he disliked Lord Keith under whom he often served. He was popular with his men and renowned for his charm and his story telling. Captain Austen jokingly referred to him as Old Crocodile .