1730-1813. He was born at Boyles Hall, Audley, near Stoke-on-Trent, Staffordshire the son of Smith Child of Miles Green, Audley, and of his wife, Mary Badderley.

Enjoying the patronage of the politician Earl Gower and Vice-Admiral Lord George Anson, Child joined the navy in 1747 aboard the Chester 50, Captain Sir Richard Spry. He was commissioned lieutenant on 7 November 1755 whilst serving in the Mediterranean aboard the Unicorn 28, Captain Matthew Buckle, and returned home to become a junior lieutenant aboard the ancient Nore guardship Princess Royal 90, Captain Richard Collins. Continuing as a lieutenant on various ships, he saw service at the sieges of Louisbourg in 1758 and Pondicherry during 1760-1. 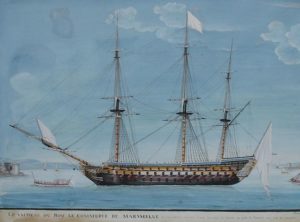 Child’s last command, albeit an ill-fated one, was the mighty Commerce de Marseilles

During the early years of the peace Child established a pottery business in Tunstall, Staffordshire, and after inheriting his uncle s seat, Newfield Hall, Tunstall, Stoke-on-Trent, in 1770, he did much to improve it, taking and interest in matters of agriculture.

In 1777 he commanded the hospital ship Nightingale 22 in the Thames, and he was promoted commander of the storeship Pacific on 30 October 1777. After taking her out to North America in the summer of 1778 he was posted captain on 15 May 1780, taking temporary command of the Raisonnable 64 before being appointed to the Europa 64 in December. He commanded the latter vessel at the Battle off Cape Henry on 16 March 1781, where she was one of three ships left exposed by the admiral’s poor tactics, losing eight men killed and nineteen wounded, and at the Battle of Chesapeake Bay on 5 September where she suffered nine men killed and eighteen wounded. After returning home the Europe was paid off in March 1782.

Sometime later Child the Impress Service at Liverpool, and in the autumn of 1795 he was given the command of the enormous Commerce de Marseilles 120, which had been taken into the navy following the occupation of Toulon in 1793. Unfortunately the intention of sending her on a secret expedition to the West Indies was subverted by her un-seaworthy condition, and she returned to port with fifteen hundred crew and troops aboard after only a few weeks at sea to be paid off in January 1796.

Child did not see any further employment but was promoted rear-admiral on 14 February 1799, vice-admiral on 23 April 1804, and admiral on 31 July 1810. He died of gout of the stomach on 21 January 1813 at Newfield, Newcastle-under-Lyne, and was buried in St. Margaret s Church, Wolstanton, his estate passing to his five year-old grandson who would later become the conservative M.P, Sir Smith Child.

He married a wealthy cousin, Margaret Roylance, in 1764 and had two sons who both predeceased him, these being Thomas, who died when the French prize flagship Ville de Paris sank on 16 September 1782, and John George who died in 1811. Initially he lived with his wife at Newcastle-Under-Lyme before inheriting Newfield Hall.