Evans was commissioned lieutenant on 27 September 1762, and in April 1767 was appointed an agent of transports, going out to New York and Philadelphia. He was promoted commander on 12 November 1777 of the newly acquired armed ship Countess of Scarborough 20, which in March 1778 lay in the Hull Roads in protection of that port.

On 29 April 1778 he was posted captain of the Royal Oak 74, and he flew the flag of Rear-Admiral Hyde Parker, the second-in-command to Vice-Admiral John Byron, in the fleet that left England for North America on 8 June, and which suffered such tempestuous weather. Evans’ command sprung her foremast in the crossing before eventually arriving off Sandy Hook on 31 August after a passage of eleven weeks. 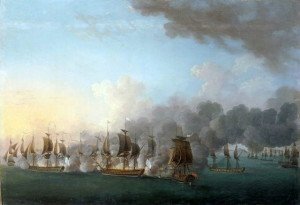 Captain Evans lost his life in the action known to the French as ‘The Battle of Louisbourg’ .

Upon exchanging with Captain Thomas Fitzherbert of the Raisonable 64 when Byron’s fleet sailed south to the Leeward Islands in December, Evans remained in North America and flew the broad pennant of Commodore Sir George Collier in operations against the colonial forces from May to August 1779, capturing the privateer Hunter on 14 August. He later served in the combined operations that resulted in the surrender of Charleston on 11 May 1780.

In early June 1780 at New York, Evans commissioned the recently captured American frigate Boston as the Charleston 28. Commanding this vessel in Chesapeake Bay and later off Boston, he participated in the recapture on 7 July 1781 of the brig Atlanta, which had previously been taken by the Americans on 28 May. Concurrently the Charleston enjoyed a most prolific month, capturing the privateers Flying Fish on 20 June, Hero on 7 July, and Swift a day later.

On 21 July 1781, the Charleston was in company with two brigs and two armed vessels in escort of a convoy bound for Cape Breton Island when they fell in with the French frigates Astrée 32 and Hermione 32, commanded by the famous Captains la Pérouse, and Latouche-Tréville. Evans ordered the men-of-war into a line between the enemy and the convoy with his frigate at the centre, but the disparity in force caused the Jack 14 to strike and the remaining British ships to flee, with the Charleston, which had lost her main topmast, amongst them. The Astrée was too damaged to follow. During the action Evans was one of eight men killed aboard the Charleston, with another nine men losing their lives aboard the other men-of-war.

Captain Evans was buried with military honours at St. Paul’s Church, Halifax, Nova Scotia where a monument to his memory was erected.