The American-built frigate Charleston 28, Captain Henry Francis Evans, being in company with two sloops and two armed ships, was in escort of a convoy off Spanish River on the north-east of Cape Breton Island, Nova Scotia, on 21 July when at about 10 a.m. two strange sail were discovered to leeward in the north-west. The British convoy, which consisted of sixteen ships that had been commissioned to carry coal mined at Spanish River, and four victuallers bound for Quebec, would soon find itself under attack.

The Charleston, which as the U.S.S. Boston had been captured at the reduction of Charleston in 1780, carried twenty-four 9-pounder cannon and two 6-pounders, giving her a broadside weight of 114 pounds, and with one hundred and eighty men aboard she was some forty men short of a full complement. Her consorts were the sloops Allegiance 14, Commander David Phips, with a nominal crew of one hundred and twenty-five men and armed with sixteen 9-pounders and two 3-pounders, giving her a broadside weight of 75 pounds, and the Vulture 14, Lieutenant Rupert George, armed with sixteen 6-pounder cannon, equating to a broadside of 48 pounds, and with a complement of ninety-nine men. Also present were the armed ships Vernon 14, which had soldiers of the 70th Regiment aboard, and the Jack 14, both of which had a crew of about fifty men and a broadside weight of a little above 50 pounds each. Amongst the convoy was a smaller armed ship, the Thompson, but she would play no part in the action. Subsequent newspaper reports based on personal correspondence also stated that the lieutenant-governor of Nova Scotia, Rear-Admiral Sir Richard Hughes, was aboard the Vernon at this time. 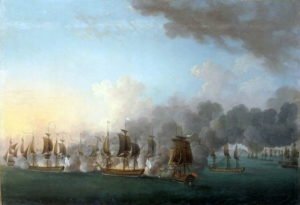 The Battle of Cape Breton

With the wind in the south-west, Captain Evans initially gave chase with the Vulture and the Jack in company, but as soon as the strange sail failed to answer the private signals at about 2 p.m. he identified them as enemy frigates, and he hauled his wind so that he could beat back to attempt the protection of the convoy. Throughout the afternoon the French tried to close, but the fluctuating wind was not only against them but also appeared to create some confusion in Captain de la Pérouse’s mind as to whether an attack on the convoy, or on the British men-of-war, would be more feasible. By about 5 p.m. however, the wind had come around in the French favour, and the two frigates now came down at such speed that they fore-reached upon the British and were thus able to prevent the detached three men-of-war from rejoining their charges.

Whilst the convoy made its way inshore towards sanctuary of the Spanish River, Evans signalled all of his men-of-war to form a line of battle, and by 7 p.m. the Allegiance and Vernon had managed to join him. Evans then placed his frigate in the centre of the line that was formed by this junction, with the Vulture and Jack dropping in behind him, and the Allegiance at the head of the line followed by the Vernon.

Shortly afterwards the two French frigates came down upon the wind into the track of what appeared to be the somewhat irresolute British line, with the Astrée leading the Hermione at the distance of half a musket-shot. Slowly they began to turn away from the wind so as to get to leeward of the British line, their intention apparently being to rake the smaller vessels from stern to stem in order to blast them out of the fight, thereby allowing them to concentrate on the Charleston.

Unsurprisingly the British vessels in the rear edged away to avoid the raking fire, so after a few long range shot the Astrée moved up the line. The first ship to feel the force of her superior cannon was the lightly built Jack, and although she bravely opened fire upon the Astrée she then fell away in some disarray as the frigate’s shot hit home. The Charleston also suffered badly once the two frigates began to battle it out at close range, and Captain Evans was fatally wounded by the Astrée’s opening broadside. 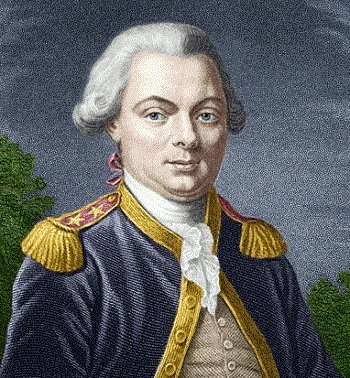 Whilst the Astrée was thus engaged the Hermione manoeuvred around her partner to tackle the Vernon and the Allegiance at the head of the line, but Captain George, being anxious to prevent the Hermione raking the Charleston from afore, gallantly brought the Vulture up to exchange fire with her at pistol shot range. All three smaller British vessels were to cause no little discomfort to their larger if equally gunned opponent, and the Hermione soon found herself damaged aloft and twice set on fire. In return the Vernon paid for her bravery by being mercilessly raked, with six men being killed and another six wounded.

Meanwhile the Jack, which had been at the rear of the British line before suffering the Astrée’s fire, curiously took a passage between the various antagonists, eased ahead of the Hermione, and then came about to run between the Hermione and the Astrée, lowering her colours in surrender as she did so and dropping in astern of the two French frigates. Otherwise, the battle continued unabated until at 8.15 the Charleston’s main topmast was shot down, as was her ensign. Anxious that the French should not be under the impression that the frigate had surrendered, Lieutenant David Mackay, who had assumed her command as Captain Evans lay dying, leaped into the mizzen shrouds with a union flag, but seemingly the French did not notice him for at this point Captain de la Pérouse ordered his men to cease firing.

Although the French wished to take possession of what they believed to be the captured Charleston the continued resistance of the Vulture and Allegiance prevented them from immediately doing so. After a further fifteen minutes, and dependent on which account to believe, the remaining British men-of-war either took advantage of the creeping darkness to make good their escape, or the French decided that nothing more was to be gained from the battle and bore away after exchanging signals to secure their prizes. Beyond doubt was Captain de la Pérouse’s outrage when the Charleston began to sail away, for as the Astrée had been damaged aloft during the action she was unable to undertake any form of pursuit. Seething at the apparent British perfidy, the French had to satisfy themselves with securing the Jack and waiting for daylight.

Yet when the new day dawned it was to the accompaniment of a thick fog that shrouded any sign of the British. Now under the orders of Captain Phips, they had spent the time repairing their damage before initially sailing to the eastward, and then returning to Halifax where Captain Evans was buried with full military honours. The French therefore had nothing else to do but bear away for Boston with their prize to affect their own repairs.

Both French captains bemoaned the fact that the late commencement of the action and the darkness of the night had prevented them capturing all the British men-of-war and convoy, but this theory discounted the brave resistance of the smaller British vessels, as typified by the gallant Jack, and the British captains’ own belief that they had seen the French off.

As a reward for their efforts Captain George was promoted into the Charleston and posted captain on 29 November, whilst Lieutenant Mackay took command of the Vulture and was promoted commander on 14 September.