1724- 83. He was born in New York, the second son of the Dutch-born colonial administrator William Burnet FRS, and of his second wife Anna Mary Van Horne. Both of his parents died at a young age, and he was left in the care of an uncle.

Burnett joined the navy at New York on 3 October 1736 as a 12-year-old boy aboard the Tartar 20, Captain Matthew Norris, and after sailing for England the whole crew was transferred on 8 December 1738 to the Strafford 60, Captain Thomas Durell, serving as a guardship at Plymouth. He rejoined the refitted Tartar, Captain Hon. John Townshend, at Plymouth on 19 January 1739, going out to South Carolina and serving in the attack on St. Augustine, Florida, during the summer of 1740. On 23 January 1741 he joined the Chatham 50, to which Townshend had been appointed, and he saw service in the Mediterranean and off Africa, although for two weeks in March 1743 he was employed aboard the Namur 90, Captain William Dilke, flying the flag of Vice-Admiral Thomas Mathews in the Mediterranean.

He was commissioned lieutenant of the Cambridge 80, Captain Charles Drummond, by Admiral Mathews on 20 August 1744, seeing further service from July 1745 aboard the Worcester 60, Captain Thomas Andrews, which sailed for Jamaica two months later, but from which Burnett appears to have been invalided home, his discharge date being 7 February 1746. On 18 March 1747 he was appointed to the Berwick 70, Captains James Douglas and Hugh Bonfoy, and he left that vessel on 29 July 1748 at the end of the War of Austrian Succession. 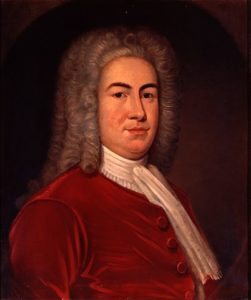 Burnett was the son of William Burnet, the renowned colonial administrator and intellectual.

In March 1753 Burnett re-joined Captain Bonfoy aboard the Penzance 44, going out to Newfoundland where Bonfoy had been appointed governor, and remaining on that vessel from February 1755 with the new governor, Richard Dorrill. He then followed the latter officer into the Royal George 100 at Woolwich as her first lieutenant in February 1756.

Having been promoted commander on 12 May 1756, Burnett captained the ketch Happy 8 with the Channel Islands squadron under Captain Richard Howe at the commencement of the Seven Years War. Two months later he achieved the significant capture of a Dutch vessel laden with timber and stores destined for Brest, which he took into Portsmouth on 13 July, and in the following month he sized a smuggler, sending the contraband goods into Plymouth. On 10 March 1757 the Happy was attacked by the superior and prolific Le Havre privateer Infernal 14 whilst on passage from Guernsey to Portsmouth, and in the early stages of the action Burnett narrowly avoided having his head shot off by a six-pound ball. Nevertheless, having twenty soldiers aboard which he had collected from Jersey, he was able to board and carry the enemy. The prize was initially taken into Guernsey, and on 22 March the Happy reached Portsmouth for a refit. She sailed once more for Guernsey in the second week of April, by which time the newspapers had not only printed an ‘extempore by a lady’ eulogising Burnett’s conduct, but were also commenting on the fact that he had not been given a deserved promotion to post captain.

In recognition of his capture of the Infernal, Burnett was indeed posted captain on 5 May 1757, and flying the broad pennant of Commodore John Moore aboard the Cambridge 80 he went out to the Leeward Islands station from Portsmouth in June, taking part in the unsuccessful expedition to Martinique during January 1759, and in the brutal, badly conducted assault on Guadeloupe thereafter. After returning to Portsmouth in the early days of October, Burnett left the Cambridge in December, whereupon he took the Bedford 64 from Portsmouth around to Sheerness for her to be docked.

On 23 March 1760 Burnett joined the Rochester 50 at Plymouth, and after capturing the privateer Subtile on 3 April, the day after putting to sea, he sailed three weeks later with Commodore Robert Swanton’s reinforcements for the expedition to the St. Lawrence. The Rochester spent the next year off the Isle de Bec, guarding the entrance to the St. Lawrence, and after joining the Leeward Islands fleet in the summer of 1761, she served in Rear-Admiral George Brydges Rodney’s successful expedition against Martinique during the early part of 1762.

In May 1762, Burnett transferred in the West Indies to the Marlborough 70, being present at Admiral Sir George Pocock’s reduction of Havana that summer where his ship suffered casualties of two men killed and eight wounded whilst bombarding Moro Castle. During the voyage home the Marlborough was on the point of foundering when, on 29 November, her crew were rescued by the Antelope 50, Captain Thomas Graves, which was returning from Newfoundland. The abandoned Marlborough was destroyed, and Burnett was exonerated of any blame for her loss at his court-martial aboard the Royal William 90 at Portsmouth on 19 February 1763.

On 20 October 1770, after seven and a half years on the beach, Burnett was appointed to the new Boyne 70 during the Falklands Islands dispute, commissioning her at Plymouth before taking a short leave of absence with gout. Going out to Jamaica in June 1771 and returning to Spithead on 1 September 1772 after an inactive posting, the Boyne became a guardship at Plymouth, and Burnett retained the command through to October 1773.

In June 1779 he was appointed to the dull-sailing Prudent 64, serving with the Channel Fleet in its retreat from the allied armada during August, and being sent from Portsmouth on 24 September with a squadron of four frigates to protect the coast of Scotland from a rebel privateer squadron commanded by John Paul Jones. News soon reached him however, that Jones had already defeated the British frigate Serapis 44, Captain Richard Pearson, on 23 September and had sailed for the Texel. On 5 November Burnett presided over the court-martial aboard the Prudent at Spithead of Captain Edward Thompson of the Hyaena 24, which found that officer partly guilty of leaving his station at Barbados without orders. Shortly afterwards, Burnett’s squadron sailed from Portsmouth for Plymouth to be incorporated into the Channel Fleet.

The Prudent was coppered at Plymouth during the winter of 1779, and in May 1780 she sailed for North America with Rear-Admiral Thomas Graves’ squadron. On 16 March 1781 Burnett commanded her at the Battle of Cape Henry, being in the thick of the action early on, and ending it with his ship much damaged, and with casualties of seven men killed and twenty-four wounded. Following a storm in July he was obliged to take the Prudent into New York for repairs, and she had not been repaired before the Battle of the Chesapeake occurred in September.

On 1 October 1781 Burnett removed into the Royal Oak 74 to join Admiral Graves’ second fruitless visit to the Chesapeake, and having later sailed for the Leeward Islands, he led the order of battle at the Battle of the Saintes on 12 April 1782. The French handled the Royal Oak roughly during this engagement and her first lieutenant was one of eight men killed, although she did receive the surrender of the Glorieux 74.

Burnett departed for England from Jamaica on 6 May 1782 aboard the packet Swallow with Admiral Sir George Rodney’s dispatches, and after arriving at Falmouth and delivering them to the Admiralty on 26 June he did not see any further employment.

Burnett had an illegitimate son, Major-General John Burnett, whose mother is not known, and he also had a daughter, Ann, born in 1765 to Mary Hinchley, who he subsequently married on 25 October 1770. Following Burnett’s death, his widow married a wealthy businessman, Thomas Rock. Burnett lived at Longford, outside London during the 1770’s

He was regarded as a good officer, but was nevertheless one of several captains named by Lord Robert Manners as lacking character and ability as a sea officer.

My thanks to Byrne McLeod for providing so much information on Captain Burnett.