Fox was commissioned lieutenant on 22 August 1759. 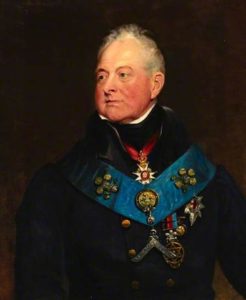 Following the Moonlight Battle off Cape St. Vincent on 16 January 1780 and the arrival of Admiral Sir George Rodney s relieving fleet at Gibraltar Fox was posted captain on 15 February and appointed to the Spanish prize Monarca 68. He then served as flag-captain aboard the Prince George 90 to Rear-Admiral Hon Robert Digby, who was second-in-command in the Channel during the campaign of June-December. He left this vessel at the end of the year, having made a most favourable impression upon the future King William IV, who was serving as a midshipman upon her.

From the beginning of 1782 Fox commanded the Vestal 28, sailing for North America in April and joining Captain Hon. George Keith Elphinstone s squadron in the Delaware. On 15 September this force captured the French frigate Aigle 40 after she had driven ashore in the Delaware, although her consort, the Gloire 32, escaped up river. The Vestal also took the letter of marquee Sophie on 13 September, and the privateers Randolph on 25 October and Surprise on 27 October. In company with the Astrea 32, Captain Matthew Squire, and Duc de Chartres 18, Captain John Child Purvis, she later took the privateer Julius Caesar on 15 March 1783.

Fox was not re-employed after the peace of 1783, but he became a superannuated admiral in 1799.

He died unmarried on 3 December 1810 and was buried in St. Lawrence Church, Ramsgate. A monument to his memory was erected by the future King William IV, who when visiting Ramsgate in October 1811 was so dismayed to find that the relatives of his late friend had been unable to afford one that he commissioned it on the spot.

His last address was given as Ramsgate, Kent.