Following their encounter with the disabled British prize Hector 74 on 4 September, the French frigates Aigle 40, commanded by the inspiring and well-connected 37-year-old Captain Louis-René-Madeleine-Levassor Latouche-Tréville, and the Gloire 32, commanded by the venerable and experienced Louis Marie Casimir, Chevalier de Vallongue, were proceeding to Philadelphia with despatches, senior military officers, and several members of the nobility, when they were sighted off Delaware Bay on the evening of 11 September by the Lion 64, Captain William Fooks, and Vestal 28, Captain William Fox. These vessels formed part of a small British squadron under the command of Captain Hon. George Keith Elphinstone of the Warwick 50, and they were now detached by him, along with the sloop Bonetta 14, Commander Richard Keats, to investigate the strangers.

After continuing towards the bay through the night, the French frigates were observed the next morning by another British vessel, the brig Racoon 14, Lieutenant Edmund Nagle, which had parted company from Elphinstone’s squadron the day before. Regrettably Nagle was under the misapprehension that the two frigates were his consorts, and unlike the French he could not see that the British squadron was in fact further out to sea. Standing confidently towards the Aigle and Gloire, the Racoon only raised her private signals when it was too late to do so. Finding these signals incorrectly answered she then tried to flee, but in running from the Gloire she came within cannon shot of the Aigle and surrendered after receiving a raking fire. 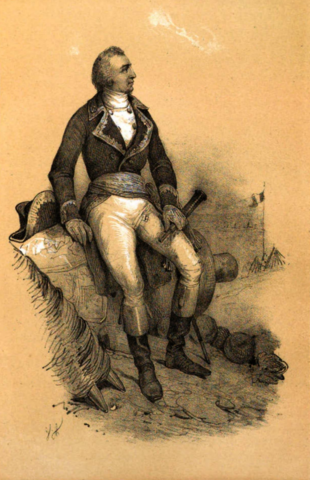 At 7 a.m. on the same morning Captain Keats reported to Elphinstone that the two strange vessels were men of war, and that on approaching them the previous evening they had declined to answer his private signals. With the Aigle and Gloire now in sight to windward Elphinstone set off in chase, being joined by the Lion and Vestal which were to leeward of him. A couple of hours later another vessel appeared from the east flying unrecognised signals and firing cannon, and Elphinstone now directed his attention to this sail instead. Working easily to leeward, the Warwick and Bonetta ran down and forced her surrender at noon. She proved to be the newly built French vessel Sophie 22, which was following the frigates from Bayonne to Philadelphia having somewhat bizarrely been employed by Latouche-Tréville to carry his mistress to America. After interrogating the prisoners Captain Elphinstone learned the identity of the Aigle and Gloire, as well as the intriguing information that they were carrying many eminent passengers and a large sum of money that constituted the payroll of the French troops in America.

Being delayed by the necessity of securing his prize and prisoners, Elphinstone detached the Lion and Vestal with instructions to prevent the two French frigates from entering the Delaware River. Come the next morning, that of the 13th, the Aigle and Gloire were discovered at anchor near Cape Henlopen Lighthouse in the company of their prize, the Racoon. Unfortunately for Captain Latouche-Tréville he had been unable to secure a pilot from the shore as, unbeknown to him, the boat sent on this task the night before had been lost inshore and most of her crew had drowned. Surmising that the boat’s non-return was due to the difficulty of finding the frigates in the darkness, he had compounded matters by firing rockets and showing a light, thereby alerting Elphinstone’s ships to his location.

Upon the British approach the French now chose to slip their cables and enter the sandbank-clogged Delaware. Without the benefit of a pilot Latouche-Tréville had no idea which of the half dozen channels to take and he therefore chose a middle course, being careful to reduce sail and sound with the lead as his frigates and the Racoon made their way into the river. The Aigle soon went aground to be heaved off with much difficulty and this delay, coupled with the fact that the fresh wind had shifted from offshore to the east and handed the weather gauge to the British, meant that by midday the Warwick and Vestal were almost within cannon shot with their consorts not far behind.

Yet despite the confident approach of his squadron Elphinstone was also in want of a good pilot, and when two of his ships struck ground on entering the shallow waters of the river he was forced to bring his squadron to anchor. The French frigates and their prize meanwhile continued slowly up the river so that they were soon well out of cannon shot, for by now Latouche-Tréville had employed the simple mechanism of bribing the experienced pilot of the Racoon to guide him. Yet the French were by no means clear of danger, as the disloyal pilot had also confirmed that the course Latouche-Tréville had taken through the Shears Shoals had been the worst option, in so much that it was not only the shallowest passage, but that it also tapered away towards an imposing sandbar. In order to enter the correct channel, he advised that the French would have to work their way back down river to the very point where the British ships were anchored. 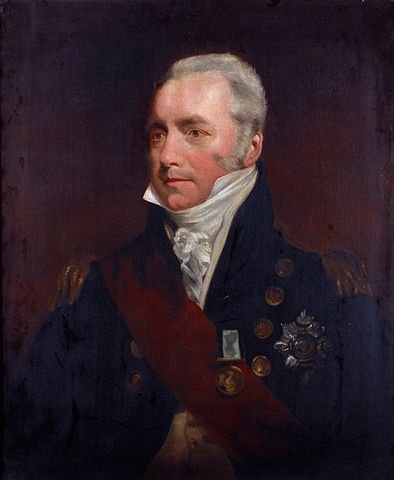 Eventually coming to anchor themselves, the French naval and military officers held a council of war to consider their options. Although some advocated working their way back down river and fighting their way to safety, their position became clearer when a lieutenant who had survived the swamping of the boat on the night of the 12th reappeared with two American pilots. The advice of these gentlemen tilted the argument in favour of pushing on up their existing channel, whilst also lightening the ships as best they could in the hope that a lesser draught would carry them over the sandbar into deeper water and allow their further progression up the Delaware to Philadelphia.

In the meantime, having ordered his own boats to sound the river, Elphinstone prevailed upon Captain Keats to lead his three lighter vessels, the Vestal, Bonetta and Sophie, upstream in pursuit of the French. Seeing the British get under way again the Aigle, Gloire and Racoon themselves weighed anchor once more and resumed their passage. Yet clearly many aboard doubted the certainty of their salvation, for thirty minutes later a number of their notable passengers including the Baron de Vioménil, the Marquis de Laval, the Duc de Lauzan, and the Comte Bozon de Talleyrand, were ferried ashore by the ships’ boats in the hope that they could escape inland across Maryland. These men would later be joined ashore by other members of the nobility, together with most of the chests containing the troops’ payroll and the Racoon’s disloyal but newly well-heeled pilot.

With the French continuing to jettison stores, water and cannon in order to lighten their ships, the hunters and the hunted eased their way up the river as the tide allowed over the next two days before finally, at 6 p.m. on the evening of the 15th, Captain Keats signalled that the Bonetta was in dangerously shallow waters. A little later he anchored in four and a half fathoms and sent a boat to inform Elphinstone that it was impossible to advance any further. This advice was soon proved to be sound, for although the Gloire and Racoon did manage to cross over the sandbar, the heavier Aigle ran hopelessly aground a short time afterwards, and upon sticking fast she began tilting to one side as the tide ebbed.

Elphinstone now requested his smaller vessels to close in as best they could and attack the stranded Frenchman. In so doing the Vestal grounded on the Aigle’s starboard quarter but the Bonetta was able to take up a position some two hundred yards off her larboard quarter, and the prize Sophie, manned by a hundred and fifty men from the Warwick and Lion under the command of the former’s first lieutenant, Mr Lock, managed to obtain a raking position from astern. With this arrangement the Aigle could barely return fire upon any of her attackers, notwithstanding the fact she had thrown most of her cannon overboard in attempting to lighten the ship.

Latouche-Tréville, who was forever a prickly opponent of the British and would remain so for another twenty-two years, realised that his position was untenable, so he did his best to destroy the Aigle by cutting away her masts and boring holes through her bottom. As soon as the British opened fire at 8.30 he displayed a token resistance with his stern chasers before surrendering the ship with the six hundred men aboard her and most of Racoon’s crew. Having been introduced to Prince William Henry who was serving aboard the Warwick, Latouche-Tréville was taken to New York and detained on parole at Long Island with his mistress for company before eventually being sent as a prisoner of war to England.

Fortunately for the British the attempted French scuttling of the Aigle proved to be of no avail and under the direction of Captain Fooks they were able to haul her off on the 17th. By Elphinstone’s judgement she was the finest frigate in the French navy, and having been commissioned under the command of Captain Richard Creyke she enjoyed a sixteen-year career flying British colours before she was wrecked off Cape Farina, north of Tunis, under the command of Captain Charles Tyler on 19 July 1798.