1759-1832. Born on 11 October 1759 in Southampton, he was the eldest and only surviving son of Rear-Admiral Sir Richard Bickerton and his wife Mary Anne Hussey.

Bickerton entered the service with the rating of midshipman upon the Marlborough 74 under the command of his father in December 1771, and then moved with him in 1773 to the yacht Princess Augusta, on whose books he remained until June 1774. He first went to sea upon transferring to the Medway 60, Captain William Affleck, bearing the flag of Vice-Admiral Robert Man in the Mediterranean, and he served in 1776 on that station aboard the frigate Enterprise 28, Captain Sir Thomas Rich, and thereafter the Invincible 74, Captain Hyde Parker, before returning to home waters in September 1777.

On 16 December 1777 he was commissioned lieutenant and appointed to the Prince George 90, Captain Charles Middleton, moving with his captain to the Royal Oak 74 for a short period from March 1778. A month later he transferred with Middleton to the Jupiter 50, where he remained to serve as first lieutenant under Captain Francis Reynolds, the future Lord Ducie, who assumed command in August. 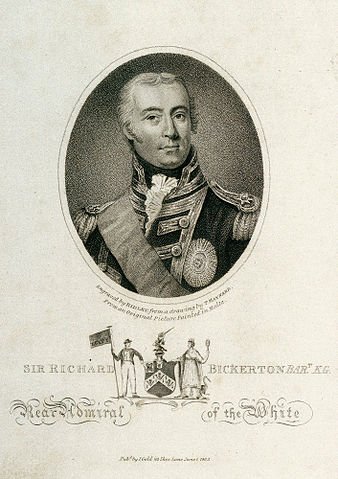 On 20 October 1778, whilst in company with the frigate Medea 28, Captain James Montagu, the Jupiter fought the French Triton 64 off Portugal. Although the engagement was not concluded because of the onset of darkness, the odds against the Jupiter had been so great that a sense of victory prevailed, and Bickerton was accordingly promoted commander and ordered to commission the newly purchased sloop Swallow 14 on 20 March 1779 for service in the Downs. In this vessel he assisted the Lively 20, Commander John Inglefield, capture the American privateer Black Prince and the Duc de Chartres 12, losing one man killed in the latter action and taking his prize into Milford Haven. He continued to serve in the Channel where he successfully dispersed a convoy on the approach of the Allied armada in August, and on 2 January 1780 he was with Captain Charles Fielding s squadron when it intercepted a Dutch convoy under the escort of Admiral Count Bylandt carrying supplies for France. After a refit and coppering at Portsmouth in the summer of 1780 the Swallow joined the Downs Squadron, and in early 1781 she went out to the Leeward Islands with Admiral Sir George Rodney, participating at the capture of St. Eustatius on 3 February.

On 8 February Bickerton was posted captain and appointed for purposes of rank only to the ex-Spanish flagship Fenix, renamed the Gibraltar 80. In April he became the acting-captain of the Invincible 74 for Captain Charles Saxton, fighting under Rear-Admiral Sir Samuel Hood in the Battle of Fort Royal on 29 April. After further commanding the Russell 74 from May and then briefly the Terrible 74, he exchanged with Captain William Clement Finch on 25 July, and he returned to England in command of the frigate Amazon 32 in December. During February 1782 this vessel was paid off, and after a short while commanding the frigate Brune 32 in home waters from September 1782 she too was paid off in the following March and he went on half-pay.

In January 1787 Bickerton commissioned the frigate Sibyl 28, going out to the Leeward Islands in April, and returning to be paid off in 1790. On 25 February 1792 he became a baronet on the death of his father.

At the commencement of the French Revolutionary War in 1793 Bickerton undertook the commissioning of the Ruby 64, joining Rear-Admiral George Montagu at Plymouth on 3 June 1794, and sailing in search of the French fleet following the Battle of the Glorious First of June. In September he transferred to the Ramillies 74 in succession to Captain Henry Harvey, and he was initially employed in the Channel before conveying General Sir John Vaughan out to the Leeward Islands in October. He then had a short spell on the Newfoundland station prior to returning to Europe at the end of 1795 and joining the North Sea fleet under Admiral Adam Duncan. The Ramillies then underwent a refit at Portsmouth in early 1796 following which she rejoined the North Sea fleet.

During 1797 he was with the Channel fleet, being present at the Spithead mutiny from 16 April, and he transferred to the Terrible 74 in July, upon which vessel his cousin, Captain Richard Hussey Moubray, served as a volunteer. In October of that year the Terrible formed part of a small squadron which unsuccessfully chased Commodore Savary s squadron of four frigates whilst it was attempting to rendezvous with Commodore Jean Bompart s expedition to Ireland. Later in 1798 he was appointed a colonel of marines, and the Terrible continued to serve with the Channel fleet into the following year.

On 14 February 1799 Bickerton was promoted rear-admiral, and in September took up the post of second in command at Portsmouth with his flag aboard the Cumberland 74, Captain Thomas Graves, and later from February 1800 the Gladiator 44, Lieutenant Emanuel Hungerford. In May, having left Portsmouth aboard the Elephant 74, Captain Thomas Foley, he returned to active service as second in command in the Mediterranean, taking passage in the Seahorse 38, Captain Edward Foote, with, amongst others, Lieutenant-General Sir Ralph Abercromby, Major-General John Moore and Major-General Sir John Hely-Hutchinson. Until he was joined by Vice-Admiral Lord Keith on 5 October he held the command of the blockade of Cadiz with his flag aboard the Swiftsure 74, Captain Benjamin Hallowell. Following the landings in Egypt on 8 March 1801 he commanded the blockade of Alexandria and superintended the embarkation of the French army, receiving the thanks of both Houses of Parliament and the award of the Knight of the Crescent from Turkey for his efforts. He transferred to the Kent 74, Captain Edward O Bryen in June 1801, and thereafter flew his flag aboard the Madras 54, Captain Thomas Briggs.

In October 1801 he was appointed a king s counsel, and for the duration of the peace he was commander-in-chief in the Mediterranean with ten sail of the line, his flag flying aboard the Kent 74, Captain Edward O Bryen, and in that officer s absence Acting-Captain John Simpson. 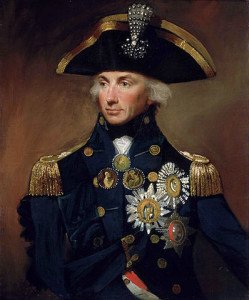 On the renewal of hostilities on 16 May 1803 Bickerton became second in command on the Mediterranean station to Vice-Admiral Lord Nelson, serving off Toulon and transferring with his flag to the Royal Sovereign 100, Captain John Stuart, on 26 March 1804. He removed to the Amphitrite 40, Captain Courtney Boyle, on 7 May 1805, and assumed temporary command of the station when Nelson raced off to the West Indies in pursuit of Vice-Admiral Villeneuve s fleet following the French breakout on 29 March. After reinforcing Vice-Admiral Cuthbert Collingwood off Cadiz on 22 August with four sail of the line, and with his flag on the Queen 90, Captain Francis Pender, which he had joined in June, Bickerton resigned his position shortly afterwards and was evacuated home aboard the Amphitrite with a liver complaint. He transferred later to the D cade 36, Captain William Rutherford, and joined Admiral Hon. William Cornwallis off Brest, having passed Nelson on his last voyage out to Cadiz before the Battle of Trafalgar on 21 October 1805.

Bickerton was created a vice-admiral on 9 November 1805, was M.P. for Poole in the Admiralty interest from 24 September 1808-1812, and served as a lord of the Admiralty from April 1807 until March 1812 under Lord Mulgrave. During this period he was in charge of naval affairs whenever Lord Gambier, the first sea lord, was at sea. On 31 July 1810 he was advanced to the rank of admiral, in the same year was created a major-general of marines, and he served as a director of Greenwich Hospital from 1810.

In April 1812 he became the commander-in-chief at Portsmouth, his flag initially flying aboard the Puissant 74, Captain Benjamin Page, and from August 1813 the recommissioned Prince 98, Captain George Fowke. He presided over the controversial court-martial of Captain Sir James Athol Wood following Vice-Admiral Allemand s escape from that officer on 8 March 1812, and his career effectively terminated with the grand review of 1814, although he remained in command at Portsmouth until May 1815. Henry Boyes was his flag-lieutenant aboard the Prince from November 1813 until May 1815.

On 2 January 1815 Bickerton was created a K.C.B., in January 1818 became a lieutenant-general of marines, and in 1823 was given permission by the King to add his mother s surname, Hussey, to his own surname after inheriting the manor of Wood Walton in Huntingdonshire. He succeeded William IV as a general of marines on the latter s accession to the throne in 1830, and died after a long illness on 9 February 1832 at The Circus, Bath. A monument to his memory was erected in Bath Abbey.

Bickerton married the beautiful Anne Athill, the daughter of a doctor in Antigua, in a grand ceremony on that island on 25 September 1788, but having no issue his baronetcy became extinct upon his death. He was a first cousin of Vice-Admiral Sir Richard Hussey Moubray, who inherited his estate at Upwood, Huntingdonshire, which he in turn had inherited from his father.

A fellow of the Royal Society from 1810, Bickerton was regarded as being somewhat tactless, pompous and arrogant. He did not initially enjoy his role as a lord of the Admiralty and seldom spoke in the House of Commons, but when he did it was merely on naval matters. He was the godfather of Admiral Lord Edmund Lyons, who was the commander-in-chief in the Mediterranean during the Crimean War, and in whose early career he took a significant interest.