c1767-1810. He was described in contemporary newspapers as a ‘near relation’ of the 5th Earl of Berkeley, which possibly indicated that he was the peer’s natural son.

By 1780 Cracraft was studying at the Royal Naval Academy, he was commissioned lieutenant of the Assurance 44 for purposes of rank only on 28 October 1790, and from 2 November he was employed aboard the Tremendous 74, commanded by his kinsman, Captain Hon. George Cranfield Berkeley. He transferred with that officer on 3 January 1791 to the Niger 32, which went out to the West Indies before returning to Portsmouth to be paid off in July.

In March 1793 he was found guilty and ordered to pay damages plus costs on a charge of sailing into a wherry at the mouth of Portsmouth Harbour and almost drowning the waterman. Serving aboard the Brunswick 74, Captain John Harvey, he assumed command of that vessel in her epic battle with the Vengeur 74 at the Battle of the Glorious First of June in 1794 after his mortally wounded captain had been forced below. As a reward, he was promoted commander of the sloop Thorn 16 on 7 June, but it is not clear that he ever took her to sea. 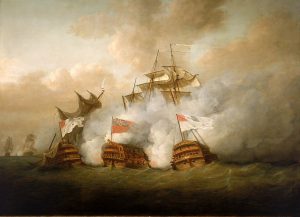 Cracraft earned his promotion to post rankby taking command of the Brunswick 74 at the Battle of the Glorious First of June when his captain was fatally wounded.

On 9 August 1794 Cracraft was posted captain of the Daphne 20 at Plymouth, which sailed for Portsmouth with a convoy of several troop transports in early October. She departed the Hampshire base towards the end of the month with the Oporto and Lisbon convoys, and upon arrival in Portugal had instructions to cruise off the Tagus for four days before collecting the homeward-bound convoy. Unfortunately, in the course of the latter duty, she was captured in the Bay of Biscay on 23 December without the necessity of an action by two French frigates attached to the Brest fleet, the Tamise 32 and Méduse 36. At the time the Daphne was carrying a large amount of specie.

The officers and men of the Daphne were incarcerated at Brest in filthy conditions along with the seamen and passengers from other captured vessels, many of whom reputedly died because of the lack of care. Cracraft managed to break gaol with the Daphne’s gunner and Lieutenant Charles Carter, who had been aboard the Alexander 74 when that vessel had struck to the French on 6 November 1794, but the latter was recognised in Brest by a Frenchmen with whom he had previously conversed, and he and Cracraft were returned to their confinement. The Daphne’s gunner did manage to get away, and after taking passage on an American ship he landed at Falmouth in March 1795. As it happened, Cracraft was exchanged shortly afterwards, and by 10 May he was back at Portsmouth to give evidence at the court martial of Captain Anthony James Pye Molloy, conversant with that officer’s conduct at the Battle of the Glorious First of June. Concurrently, Cracraft was acquitted for the loss of the Daphne at his own court-martial aboard the Glory 98 at Portsmouth.

He succeeded Captain Robert Barlow aboard the 12-pounder frigate Aquilon 32 in December 1795 and was to be found serving off the coast of France with Vice-Admiral Sir Alan Gardner’s squadron in early 1796. During April his command was roughed up by eight gunboats in calms off Barfleur on the Cherbourg Peninsula, suffering damage to her mizzenmast, having a midshipman gravely wounded, but driving two of the enemy ashore. In early June the Aquilon was with the fleet at Spithead, and at the end of the month she put out under Vice-Admiral John Colpoys with several convoys, being detached to escort vessels up the Bristol Channel. On 16 August she went out on a cruise with Gardner’s squadron prior to returning to Plymouth with the admiral’s dispatches on 26 September, and after a further cruise with a small frigate squadron which sailed from Plymouth in October, she arrived at Portsmouth from the Channel Fleet on 21 January 1797.

On 5 March 1797 the Aquilon sailed from Portsmouth with the West Indies convoy, and after arriving at Jamaica with upwards of thirty vessels she continued in employment on that station, capturing a small privateer schooner that autumn. In the early summer of 1798 Cracraft joined the Severn 44, having exchanged with the latter’s captain, Thomas Boys, and he departed with the Jamaica convoy from St. Nicolas Mole, Saint Domingue, on 29 June to arrive in the Downs by 12 August. He was rewarded with a sword by the London merchants for his safe delivery of the convoy, whilst at the end of August the Severn arrived at Woolwich to be refitted, whereupon he left her.

His final command, from January 1801, was the crack heavy frigate Anson 38, sailing on a cruise from Portsmouth on 7 February and sending an American ship into Falmouth shortly afterwards. Thereafter, she was in and out of Portsmouth throughout the spring whilst engaged in cruises and convoy duty. On 7 June she sailed from Portsmouth for Lisbon with the Portuguese ambassador and a three hundred-thousand-pound subsidy for that country, and after departing the Tagus on 12 July for her return home she endured a difficult six week-passage that saw her convoy forced to put into Mounts Bay off Penzance. On 3 September she arrived in the Downs, and after going around to Portsmouth she remained for some weeks at Spithead.

Towards the end of October 1801, the Anson sailed with the Gibraltar and Mediterranean convoys, and during the peace she remained on the latter station with the small squadron commanded by Rear-Admiral Sir Richard Bickerton. Towards the end of 1802 she was off Sardinia with that force, and after arriving at Malta on 28 November she was ordered to Egypt to assist in the evacuation of British forces.

With hostilities against France having resumed in 1803, a small squadron under Cracraft’s command cut out the privateer Marguerite 4 off Cape Spartivento on the southern tip of Sardinia on 15 October. In November he went up the Adriatic, having other vessels under his command. The Anson was at Malta in May 1804 and by the 28th of the month was at Smyrna. In August she sailed from Constantinople with a convoy after undergoing repairs for which the Sublime Porte had not made a charge, and during the early autumn Cracraft commanded a squadron of five frigates patrolling the Straits of Messina to protect Sicily from the French.

In May 1805 reports in the home newspapers stated that the Anson had captured two valuable Spanish ships, one of which was homeward bound from Vera Cruz. Meanwhile, on 1 May she had left Malta with a convoy, and after passing Gibraltar on the last day of the month the fleet was about three hundred miles west of Oporto when it was approached by a Spanish sail of the line, later reported to be the Glorioso 84. Cracraft ordered one of the larger merchantmen to run down to leeward displaying all manner of cloths and linen to create the illusion that she was signalling to other armed ships in the convoy, and by also steering the Anson towards the enemy he was able to dissuade the Spaniard from making an attempt on the convoy for fear of being overwhelmed by what she might have perceived to be an overwhelming force. Even so, the Glorioso remained in sight for a couple of days before bearing away. The convoy eventually arrived safely at Portsmouth in the early days of July where the Anson was taken into the harbour and received orders to be paid off.

Cracraft did not see any further active employment, however, in April 1807 he was appointed to the Sea Fencibles at Margate, and he later held this role for the coast of Sussex.

Captain Cracraft died after a short illness at his residence in Chichester on 19 February 1810. Adding credence to the identity of his origins, the newspapers reported that the sudden deterioration of his health had prevented the Earl of Berkeley’s family from attending a social event in Gloucester.