Creyke was one of the picked members of crew who in 1764 joined the Dolphin 20, Captain Hon. John Byron, which in company with the Tamar 16, Commander Patrick Mouat, sailed from Plymouth in July on a secret voyage to the South Seas. The expedition visited Rio, the Cape, Bengal, the Falkland Islands, the Straits of Magellan, Patagonia, the Isles of Disappointment, Batavia and the Cape of Good Hope once more, returning to the Downs on 9 May 1766. He was later commissioned lieutenant on 23 March 1770.

Creyke was promoted commander of the Otter 14 on Christmas Day 1778, serving on the North American station. Whilst supporting Commodore Sir George Collier’s campaign against the Americans during May-August 1779, he commanded a small squadron in the main branch of the Chesapeake which captured or destroyed many enemy vessels, and which generally blocked the navigation of the river to colonial shipping. Although he later sailed with Collier’s squadron from Sandy Hook on 3 August to relieve the garrison at Castine on Penobscot Island, Maine, he lost contact in a fog and was not with the commodore’s force when it arrived at its destination ten days later.

On 25 January 1781 the Otter formed part of a squadron under Captain Andrew Barkley of the Blonde 32 which embarked three hundred soldiers to occupy the town of Wilmington in order to provide a base for the Army which was marching northwards. During this mission the squadron captured several American ships. 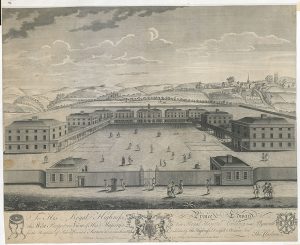 Captain Creyke was the long-terms governor of the Royal Naval Hospital at Plymouth.

Creyke appears to have left the Otter in March 1782, and during November of that year it was reported that he had been commanding the floating battery Rhinoceros 28 at New York. He was posted captain of the recently captured French frigate Aigle 36 on 17 December, which highly regarded vessel sailed from New York to reach England in July 1783 and was paid off on 11 August.

He did not see any further employment at sea, and in his retirement was listed as a ‘fashionable arrival’ at Bath in September 1789. He also evidently spent some time in London, for in November 1794 it was reported that personal property had been stolen from his Hackney Coach whilst it was waiting outside the White Horse Inn in Fetter Lane, Holborn.

On 15 July 1795 Creyke was appointed the governor of the Royal Naval Hospital at, Plymouth, in which capacity, it was reported in December 1809 that he had been ordered by the Board of Admiralty to repay the 12s a day he had received as a superannuated captain following the increase in his salary from 500 guineas to 800 guineas per annum, the matter being termed an ‘abuse’ in the newspapers. Whilst retaining his position at the hospital, he assumed the duties of the Resident Commissioner of the Victualling Board at Plymouth in February 1820.

Captain Creyke died in his residence at the Royal Naval Hospital in Plymouth on 3 December 1826.

He married Anne Leming Adey of London, and two of his sons, Captain George Adey Creyke and Rear-Admiral Richard Creyke, served in the Navy, whilst Stephen Creyke took holy orders and served as the Archdeacon of York from 1845-66. The couple also had issue at least one daughter, and at the turn of the century they owned a residence including stables in Emma Place, Stonehouse, Devon.