It is understood that he originated from a wealthy and long-established Hertfordshire family, but any other personal details have not filtered down to the present age, perhaps as a consequence of his ultimate disgrace .

Commissioned lieutenant on 23 February 1756 and promoted commander on 16 June 1761, Boteler sailed for the Leeward Islands in command of the bomb ketch Thunder 8 and served in operations against Martinique during January-February 1762. He was posted captain of the Nottingham 50, for purposes of rank only on 26 March 1762, and immediately appointed to the Penzance 44, which he commanded for the remainder of the year. He was present at the reduction of Havana during the summer of 1762 and thereafter escorted a convoy from Jamaica to England.

During the latter part of 1764 he took command of the Shannon 28 at Woolwich, taking her out to the coast of Africa in the ensuing January before leaving her and returning home. 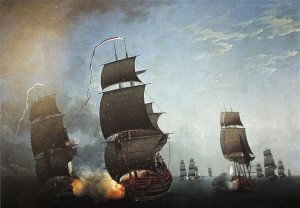 The capture of Boteler’s Ardent in 1779 resulted in his court-martial and dismissal from the navy.

In January 1778 Boteler commissioned the new Actaeon 44 for service in the North Sea and in January1779 he sat on the court martial of Admiral Hon. Augustus Keppel following the Battle of Ushant on the 27 July 1778. Although appointed to the Ajax 74 in early 1779, his next command at sea was to be the Ardent 64, which he recommissioned in June.

His command of the Ardent lasted a mere two months, for she was captured by the allied fleet in the Channel on 17 August 1779, three days after she had left Plymouth to rendezvous with Admiral Sir Charles Hardy s fleet. The circumstances could not have been more unfortunate, the Ardent had a very raw crew, she missed a signal of recall from the Kingfisher which had been sent out by Hardy, and her private signals were correctly answered by the enemy. Once four French frigates attacked her there was little Boteler could do but strike his colours, the more so with enemy ships-of-the-line approaching.

It was therefore a surprise to many when he was dismissed the service following the court martial into the loss of his ship which convened on 2 March 1780 aboard the Victory 100 in Portsmouth Harbour. The verdict stated that it appears that Captain Philip Boteler did not do the utmost to prevent the king s ship falling into the enemy s hands; and that therefore he ought to be dismissed from His Majesty s service . His officers were acquitted. The Ardent was recaptured at the Battle of the Saintes in 1782.

Following his dismissal from the navy Boteler rapidly descended into obscurity and even contemporary historians were unable to confirm whether he was alive just a few years later.