In February 1737 Milbanke entered the Royal Naval Academy at Portsmouth, and leaving three years later served successively aboard the Tilbury 60, Captain Robert Long, Romney 50, Captain Thomas Grenville, and the Princess Mary 60, Captain Thomas Smith. On 20 April 1744 he was commissioned lieutenant, and a month later joined the Anglesea 40, Captain Jacob Elton, before returning to Smith aboard the Royal Sovereign 100 in December.

He was promoted to command the bomb Serpent 8 on 13 September 1746, being employed in Scottish waters, and on 21 May 1748 was posted to the frigate Inverness 22, although this appointment was for the purposes of rank only.

After spending the peace on half pay Milbanke was appointed to the Romney 50 in the spring of 1755, serving under the orders of Vice-Admiral Hon. Edward Boscawen in the following summer and joining the Guernsey 50 in July. He sailed to the Mediterranean in the summer of 1757, and in 1759 undertook an independent mission to Morocco, being well received by the sultan but being absent from the Battle of Lagos on 20 August when his ship was commanded by his first lieutenant, Michael Kearney. He subsequently rejoined the Guernsey and returned to England with the Levant convoy early in 1761.

After a long period on the beach he became flag-captain to Vice-Admiral Thomas Pye aboard the Barfleur 90 at Portsmouth in 1775, and in April 1777 he commissioned the new Princess Royal 90 for Pye s flag. He transferred to the Namur 90 in May 1778 when the Princess Royal was requisitioned for the flag of Vice-Admiral Hon. John Byron.

Milbanke sat on the court martial of Admiral Hon. Augustus Keppel following the Battle of Ushant on 27 July 1778 and was created a rear-admiral on 19 March 1779. He was thereafter based at Plymouth as second-in-command to Vice-Admiral Lord Molyneux Shuldham, and on 26 September 1780 was promoted vice-admiral. Upon the fall of the government in 1782 he briefly flew his flag in the North Sea aboard the Fortitude 74, Captain George Keppel, before joining the Channel fleet commanded by Admiral Lord Howe in the second half of the year, his flag flying on the Ocean 90, Captain Richard Boger. He sat on the court-martial into the loss of the Royal George on 29 August, and served with the fleet when it relieved Gibraltar on 18 October and at the action off Cape Spartel. He ended the war in command of a squadron off Ireland. 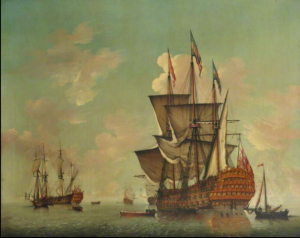 Admiral Milbanke flew his flag aboard many vessels as a port admiral, including the 100 year-old Royal William at Portsmouth in the latter stages of his career

After the termination of hostilities he served as commander-in-chief at Plymouth from May 1783 with his flag aboard the Panther 50, Captain Robert Simonton, and later the Blenheim 90, Captain Richard Boger, until she was paid off in September 1784. From 1785-6 his flag was aboard the Sampson 64, Captain Charles Hope, and he left his post at Plymouth in the latter year.

From 1789-91 he was lieutenant-governor and commander-in-chief at Newfoundland with his flag aboard the Salisbury 50, Captains William Domett from May 1789 and Edward Pellew from June 1790. During his time in office he did much to enforce the strict rules regarding the prevention of unauthorised immigration to the colony, burning down several buildings in the course of this duty. He later flew his flag at Portsmouth from August 1791-2 aboard the Bedford 74, Captain Sir Andrew Snape Hamond.

On 1 February 1793 Milbanke was promoted admiral, and after several years unemployment he was appointed commander-in-chief at Portsmouth on 14 September 1799 when Admiral Sir Peter Parker became admiral of the fleet on the death of Admiral Earl Howe. Remaining in the position for the next four years during times of war and peace, he flew his flag predominately aboard the Royal William 90, Captain Francis Pickmore, but also briefly on the Guillaume Tell 84, Captain Thomas Elphinstone, which arrived at Portsmouth in November 1801 from the Mediterranean, and later during 1802 aboard the Neptune 98, Captain William O Brien Drury. He was finally relieved on 24 March 1803 and did not see any further employment.

He died on 10 June 1805 from injuries incurred after falling over the banisters into the hallway at his home in Upper Wimpole Street, London.

Milbanke married Mary Webber and had one son, Ralph, who retired as a captain in 1804, and two daughters, the younger of whom married William Huskisson, the brother of Captain Thomas Huskisson, and the secretary of war in William Pitt s government. His grand niece, Anne Isabella Milbanke, married the poet Lord Byron in 1815.

He was well regarded and worthy of the opportunities that came his way.