1741-1814. Born in February 1741, he was the illegitimate son of Sir Charles Henry Frankland, 4th Baronet, and was descended from Oliver Cromwell.

His early life was spent in Boston, Massachusetts with his father, who was the collector of customs, and his father s young humbly-born mistress Agnes Surriage. They moved in 1752 to an idyllic retreat at Hopkinton, some thirty miles inland, and in October 1756 Cromwell joined the Success 20, Captain John Rous, who was a particular friend of his father. 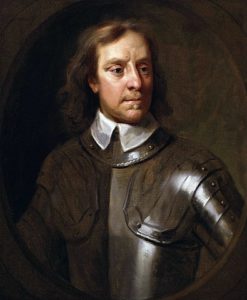 Henry Cromwell was a direct descendant of the Lord Protector, Oliver Cromwell.

Cromwell was commissioned lieutenant on 6 July 1761, but in 1763 he retired to Bath, England, with his father who was in poor health. Following his father s death in 1768 he returned to Hopkinton with Agnes Surriage who had by now become Lady Frankland, and with whom he undoubtedly had a strong attachment. By 1775 the American Revolution was in full swing, and together with Lady Frankland he left for Boston, being detained by colonial forces for a short while before sailing for England where they took up residence with the Frankland family at Chichester, Sussex.

Cromwell was promoted commander on 10 May 1779, and, from the following month he commanded the Cabot 14 in the Channel and North Sea. The Cabot, in company with the Quebec 32, Captain George Farmer, and Unicorn 20, Captain John Ford, was responsible for the destruction of the greater part of forty-nine enemy vessels when a French convoy was driven ashore when trying to reach Morlaix on 5 July 1779. He was also present with the Cabot in escort of the convoy at the Battle of the Doggersbank on 5 August 1781, and his vessel was paid off later that year.

He was posted captain on 14 November 1781, and from 23 November until 8 April 1782 he commanded the Victory 100, flagship of Rear-Admiral Richard Kempenfelt in the Channel. On 12 December he took part in Kempenfelt s brilliant tactical victory off Ushant when a force of twelve sail of the line took fifteen prizes out of a French East India convoy escorted by the Comte de Guichen s larger fleet of nineteen ships. Cromwell later commanded the Royal George 100 with Kempenfelt s flag from March until May 1782, and his final sea-going command was on a temporary basis for Captain John Howarth aboard the Bienfaisant 64 in August 1782. Shortly afterwards he resigned from active duty, allegedly because he did not wish to continue to fight against his native country, America.

After retiring to Chichester he commanded the Sussex Sea Fencibles towards the end of the 1790 s. He was advanced to flag rank on 1 January 1801, and in February 1806 inherited the estate of Muntham Court, Findon, Sussex from his eccentric innovative uncle, William Frankland, adhering to a provision that he change his own surname to Frankland.

He became a vice-admiral on 25 October 1809 and died in January 1814, being buried in Chichester Cathedral.

On 2 January 1779 Cromwell, as he then was, married a widow, Mary Ventham, who died in 1823, and by whom he had a son and daughter. His stepdaughter, Jemima Ann, the only daughter of John Ventham, married the future Commodore Sir James Brisbane at Chichester on 17 June 1800.

He was apparently held in high esteem by his superior officers.