1767-1809. He was born on 4 March 1767, the son of Lieutenant George Phillips Towry, a commissioner of the Victualling Office, and of his wife, Elizabeth More. Many of his ancestors served in the Navy.

Following an education at Eton College and entry to the books of several vessels, Towry joined the Alexander 74 as a cabin servant to Captain Lord Longford in June 1782, and was present at the relief of Gibraltar on 18 October and the engagement shortly afterwards off Cape Spartel. He later served aboard the Chatham guardship Carnatic 74, Captain Anthony Molloy, and in the yacht Royal Charlotte, Captain Hon. William Cornwallis, before moving on to the Europa 50, Captain Hon. Michael De Courcy. This vessel went out to serve as the flagship of Vice-Admiral James Gambier at Jamaica in November 1783, and in the following spring De Courcy exchanged into the Nemesis 28, which he brought home to pay off in May 1784. 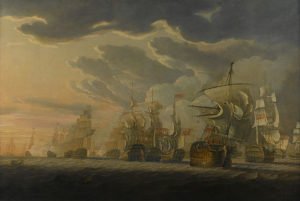 Towry was present at the Battle of Cape St. Vincent in 1797.

From October 1784 to March 1786 Towry was employed in home waters aboard the crack frigate Hebe 36, Captain Edward Thornbrough, on which vessel Prince William also served as a midshipman. He then followed the Prince, now a post captain, to the Pegasus 28, being aboard this frigate from March 1786 to December of the following year. On 6 February 1788 he passed his lieutenant’s examination and he was promoted to this rank on 23 October 1790. In the meantime, he had served in Prince William’s frigate Andromeda 28 from March 1788, and with the young royal aboard the Valiant 74 during the Spanish Armament of 1790.

In 1793 Towry joined the Victory 100, Captain John Knight, the flagship of Vice-Admiral Lord Hood in the Mediterranean, and with seniority from 14 September he commanded the French prize corvette Eclair 18, serving in the Corsican Campaign from February 1794. His subsequent appointments over the next few months are not clear, but it seems likely that he commanded the Berwick 74 on a temporary basis from 26 May to 27 June, in which period he was posted captain on 18 June. He then probably joined the recently captured French frigate San Fiorenzo 36, from which he exchanged with Captain Sir Charles Hamilton into the Dido 28 in July. Some sources however state that he was commanding the Dido when she was the only British vessel to fire upon the French fleet when they were chased into the Golfe Juan on 12 June, although this would appear to be incorrect.

Remaining in the Mediterranean, the Dido took the French cutter Téméraire 20 into Leghorn in April 1795, and in May joined the fleet off Minorca. In company with the Lowestoffe 32, Captain Robert Gambier Middleton, she fell in with the French Minerve 40 and Artémise 36 on a voyage from Toulon on 24 June, the Dido engaging the former before being joined by the Lowestoft after the Artémise had fled the scene. The Minerve was captured, and upon being bought into the service the command was given to Towry in September. Remaining in the Mediterranean, he took a convoy from Leghorn to Sicily during February 1796.

In April 1796 Towry moved to the Diadem 64 in which he was employed under Commodore Horatio Nelson, serving as his flag captain for some time, specifically during the blockade of Genoa, the harassment of the Italian Riviera, and the evacuation of Calvi following Rear-Admiral Robert Man’s flight from the Mediterranean in October 1796. On 14 February 1797 Towry commanded the Diadem at the Battle of St. Vincent, suffering only two men wounded and having little opportunity for distinction despite being repeatedly signalled to discontinue the action late in the day. Not long afterwards he sailed with a small squadron from Lisbon under the orders of the promoted Rear-Admiral Sir Horatio Nelson, which it was hoped would fall in with a homeward-bound Spanish treasure fleet from Mexico, although sadly for Towry it failed to do so. By the end of April, he was with the fleet at the blockade of Cadiz.

At the beginning of September 1797, the Diadem was detached to Lisbon with the Egmont 74, Captain John Sutton, to collect a convoy and provide for the embarkation of troops for England, and this fleet returned to Portsmouth in November. Both vessels then sailed around to the Downs where it was intended that they would head up river to Chatham to be paid and repaired, but instead they were ordered to remain stationed for the winter in the Downs in protection of the coast. This allowed Towry to attend the service of General Thanksgiving at St. Pauls in December when the flags of the conquered fleets were paraded before the King. In March 1798, the Diadem sailed around to Portsmouth from the Downs where she remained for the next couple of months, and at the end of August she was ordered to attend the King on his annual holiday at Weymouth.

November 1798 saw Towry appointed to the recently captured French prize Uranie 38 at Plymouth, serving in the Channel and being present in the Aix Roads during July 1799 under Rear-Admiral Charles Pole at the blockade of five French ships following the Brest fleet’s breakout on 25 April. Further cruises took place on the coast of France. On 14 March 1800 the Uranie grounded in the Hamoaze at Plymouth but she got off shortly afterwards, and operating under the orders of the Channel Fleet commander-in-chief and cruising off Coruna she captured a number of privateers to include the Bayonne-based Cerbère 6 on 25 March, the Bayonne-based Shabuk 14 off Cape Finisterre in early April, and the Bayonne-based Revanche 14 off Cape Ortegal on 28 July1800. At the end of November, the Uranie returned to Plymouth from which port she continued to cruise, and in March 1801 Towry was reportedly succeeded by Captain William Hall Gage, although newspaper reports suggested that he continued in command until the autumn.

At the beginning of October 1801 Towry was appointed to the Cambrian 40 pro tempore for Captain Hon. Arthur Kaye Legge who took leave, remaining in Plymouth Sound for some weeks and then sailing for Portsmouth and the Downs in February before returning to Plymouth in March 1802. She was next ordered around to the Thames and up to Sheerness, but any thought of her being paid off was negated when she put off for Portsmouth again, reaching the port on 30 March. During April she briefly flew the flag of Admiral Mark Milbanke at the Hampshire port, and at the end of the month she was finally paid off.

Towry was not re-employed following the resumption of hostilities with France in 1803 until July, when he kissed hands with the King and commissioned the new Tribune 36, which frigate had come into Portsmouth Harbour from the shipyard at Buckler’s Hard on 7 July to be coppered. On 20 August she went out of harbour, and he thereafter commanded her as a guardship off the Needles, with the squadron off Cherbourg, and later off Le Havre, from where she was driven back to Portsmouth by heavy gales in November. Remaining in home waters and the Channel for the winter, he was invalided ashore following an illness in January 1804.

From May 1804 to June 1806 Towry commanded the yacht Royal Charlotte, which role also incorporated the command of vessels posted off Gravesend for the defence of the Thames, and in August he sailed from Deptford to Weymouth to attend the Royal Family on their annual holiday. Following this posting he became a commissioner of the Transport Board and undertook the duties of deputy-chairman of the Victualling Board, being regularly presented to the King during this period.

Captain Towry died at his father’s house of quinsy following a short illness in Somerset Place, London on 9 April 1809, and he was buried at St. Marylebone Parish Church eight days later.

He married Elizabeth Chamberlayne, daughter of Captain George Chamberlayne, and had issue two children who survived infancy. She died in December 1806 after a short illness. His early patrons were Admiral Lord Hood and Prince William.

Towry was considered to be a good officer.