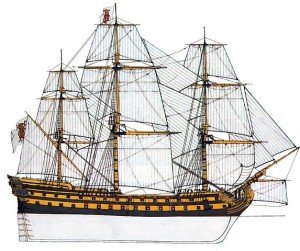 Pakenham was commissioned lieutenant on 17 June 1769 and promoted commander on 1 April 1779. He commanded the Porcupine 20 in Captain Hon. John Luttrell’s brilliant expedition against Omoa on the Honduran Coast from 19 September to 19 October, and having been sent home with despatches he was posted captain on 1 January 1780, joining the Camel 24, and serving in home waters or in convoy duty before paying her off in July 1782.

From 1784 he had the Janus 44 at Jamaica, paying her off in October 1786 after he had briefly commanded the station following the death of Rear-Admiral Alexander Innes in January of that year.

From 1794 he commanded the Gibraltar 80, which as the Fenix had been captured from the Spanish in 1780. During December 1794 Captain Edmund Nugent was appointed to succeed him as Pakenham was apparently so ill that his demise appeared imminent, but within two weeks he was happily back walking his quarterdeck and Nugent was therefore placed elsewhere.

Going out to the Mediterranean in May 1795, Pakenham commanded the Gibraltar at the Battle of the Hyères Islands on 13 July. During the storm that destroyed the Courageux 74, on the African coast on 18 December 1796 the Gibraltar was also dragged from her anchors but survived, although her grounding outside Gibraltar Bay resulted in her being sent home for repairs and she thus missed the Battle of St. Vincent on 14 February 1797. The Gibraltar was still under repair at Plymouth on 26 April when the ships there mutinied, and when Pakenham was sent by Rear-Admiral Sir John Orde, the temporary commander-in-chief, to negotiate with the delegates they shunned him He left the Gibraltar shortly afterwards

From 4 June 1798 Pakenham had the newly commissioned Ajax 74 in the Channel, and he left her on 2 March 1799 having learned of his elevation to flag rank on 14 February. He was further promoted vice-admiral on 23 April 1804.

He married Frances Thomas but did not have issue any children. His residence was given as Lowestoft, Essex.