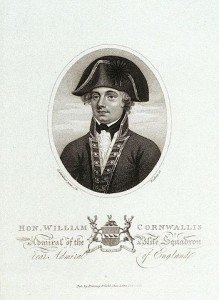 Glover’s friend, Hon William Cornwallis, forever held a grudge against the officer who denied Glover the opportunity to die with honour on his quarterdeck

Died 1780. He was one of two sons of the renowned poet and politician, Richard Glover, who sat as the M.P for Weymouth and Melcombe Regis from 1761-8, and of his wife, Hannah Nunn. His parents subsequently divorced in 1756.

Glover was serving aboard the Bedford 70, Captain James Douglas, as a midshipman in 1755, and was commissioned lieutenant of the Hind 24, Captain Robert Bond, on 8 December 1760. Seeing further service in the Seven Years War, he was promoted commander of the Favourite 16 on 6 August 1762, which vessel was paid off in March 1763.

On 20 June 1765 he was posted captain of the Unicorn 28 for purposes of rank only, and in October 1770 he recommissioned the Tartar 28 for the Falkland Islands dispute, leaving her before the following January.

Glover commissioned the new two-decked Janus 44 in 1778 and sailed out to the Jamaican station in December. During his period of command he was brought to a court martial following a complaint from his officers, but was honourably acquitted. He was nominally in command of the Janus in Captain Hon. William Cornwallis action with the French off Monte Christi on 20 March 1780, but having been ill for some time he died of natural causes in his cot during the action. In his place Lieutenant George Hopewell Stephens fought the Janus with some distinction, and when the frigate returned to Jamaica Captain Horatio Nelson was appointed his successor.

The stigma of having not exerted himself in his duty was attached to Glover at the time of his death, and thus Admiral Hon. Sir William Cornwallis, a personal friend, forever bore a grudge against Captain George Hopewell Stephens for not allowing Glover the opportunity to die with honour on his quarterdeck during the action off Monte Christi.