1758-93. He was born on 30 November 1758, the second son of Vice-Admiral Hon. John Byron, and of his wife, Sophia Trevannion. He was the uncle of the poet Lord Byron and a cousin of Rear-Admiral Richard Byron. 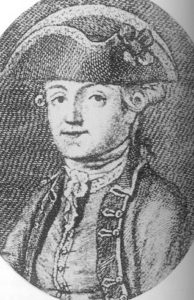 George Anson Byron was the brother of Captain ‘Mad Jack’ Byron, who in turn was the father of the poet, lord Byron.

Byron was commissioned lieutenant on 31 May 1776 and promoted commander of the storeship Grampus on 20 October 1778 at Spithead. Having been appointed to the Proserpine 28 in early 1779 he was posted captain on 3 April in the Leeward Islands, and he was present at the Battle of Grenada on 6 July 1779. The French frigate Alcm ne 30 struck her colours to him off Martinique on 24 October when under chase by a small squadron commanded by Captain Timothy Edwards of the Cornwall 74, and he recaptured the sloop Sphinx 20 from the French on 29 December. During 1780 he served with the Channel fleet in the June-December campaign, and in March of the following year was sent out to cruise two hundred leagues to the westward of the Lizard in search of the homeward-bound Jamaica and Leeward Islands convoys.

In late 1781 Byron joined the newly commissioned Andromache 32, going out to the Leeward Islands at the start of 1782 in which he shadowed the French fleet but earned an avuncular rebuke from his patron, Admiral Sir George Rodney, for leaving his station to bring him news of the French movements. He was present at the Battle of the Saintes on 12 April 1782, and following the action was afforded the honour of giving passage home to the bearer of the victorious despatches, Captain Lord Cranstoun, together with the wounded Captain Lord Robert Manners. Sadly the latter officer succumbed to lockjaw and died within a week of the battle. Byron served thereafter with the Channel fleet, being present at the relief of Gibraltar on 18 October, and serving in a small cruising squadron commanded by Captain John Harvey before being paid off in April 1783.

During 1784 he commanded the Druid 32 which was employed off Lands End in anti-smuggling operations, before leaving her in March 1785 in poor health. He then spent some time living in Chantilly, France, where he took custody of his dissolute brother Mad Jack Byron s child following the death in childbirth of her mother, Lady Amelia d Arcy.

Byron recommissioned the Phoenix 36 in October 1788 and took her out to the East Indies with Commodore Hon William Cornwallis squadron early in the following year, being active in the war with Tippoo Sahib and earning early success with his interception of the enemy s store-laden transports. He also served ashore but was obliged to leave the Phoenix and return to England in 1789-90 because of injuries sustained when his barge overset in the surf whilst attempting to cross the bar of the Billiapatnam River near Cannanore. During this unfortunate incident his chest was twice stove in by the gunwales of the boat.

Captain Byron died from his injuries at Dawlish on 11 June 1793.

He married Charlotte Henrietta Dallas of Dallas Castle, Jamaica, who predeceased him by four months, having died at Bath on 26 February 1793 at the age of twenty-nine. His son, also George Anson Byron, was born on 8 March 1789 and was present aboard the frigate Tartar 32 when the gallant Captain George Bettesworth was killed off Norway on 16 May 1808. He was posted captain on 7 June 1814, succeeded his cousin Lord Byron in the family title upon the poet s death on 19 April 1824, and eventually rose to the rank of admiral. The elder Captain Byron also had two daughters, one of whom predeceased him.

Byron was highly regarded as a brave an active officer, and was of a pleasant manner.