1755-96. He was baptised at Crailing, Roxburghshire on 26 June 1755, the third son of James, 6th Lord Cranstoun, and of his wife Sophia Brown. His family owned two plantations and many slaves on the island of St. Kitts.

Cranstoun s early elevations in life were rapid, becoming a lieutenant on 19 October 1776, and succeeding his elder brother William in the family peerage on 1 August 1778.

Having temporarily succeeded Captain James Brine at the end of the previous year, he commanded the Belliqueux 64 at the Battle of St. Kitts on 25/26 January 1782 where his ship suffered casualties of five men killed and seven wounded, and on the 31st of that month he was posted captain and exchanged with Captain Andrew Sutherland into the St. Eustatius 20. He fought aboard the Formidable 98, Admiral Sir George Rodney s flagship, at the Battle of the Saintes on 12 April, having joined her four days earlier with the apparent intention of replacing her flag-captain, John Symons. As a further sign of Rodney s favouritism towards him he received the surrender of the French commander-in-chief, Admiral Francois Joseph Paul de Grasse-Tilli, and as well as being mentioned in despatches by his patron he was given the honour of taking them back to England aboard the Andromache 28, Captain George Anson Byron.

During September 1782 Cranstoun was appointed to commission the new Grampus 50 at Plymouth, which he paid off in the following March.

After a long period of unemployment throughout the years of peace he recommissioned the Assistance 50 during July 1790 in the course of the Spanish Armament, this vessel being paid off in September 1791.

In February 1793 Cranstoun recommissioned the twenty-five year old Raisonnable 64, serving successively off France, Spain, the Canary Islands, West Indies and Ireland. Returning to Falmouth on 24 December after a six month voyage, he declared a sick-list of some one hundred and eighty men, all apparently suffering from typhus. He remained with this vessel into the following year. 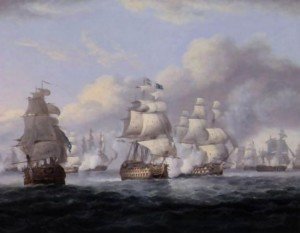 Cranstoun commanded the Bellerophon in the celebrated Cornwallis Retreat of 1795

His next appointment was to the Bellerophon 74 on 1 December 1794 to which ship he removed some thirty-odd followers, although the discipline aboard deteriorated under his command, and especially during three months spent anchored in the Solent in the spring of 1795 when a group of marines proved especially troublesome. Even so, he wasted little time in blaming her long-time captain and admiral, Sir Thomas Pasley, for having allowed a lax discipline prior to his taking command. On 17 June 1795 he commanded the laggardly Bellerophon with great skill during the celebrated Cornwallis Retreat off Brittany. The marines, who had written a letter of complaint at their treatment aboard the Bellerophon were then brought before a court martial at the end of September, but in view of their previous bravery in action were allowed to walk free. Thereafter the disciplinary problems did not re-occur, and the Bellerophon rejoined the Channel fleet following a much needed refit in the autumn.

In 1796 Cranstoun was appointed the governor and vice-admiral of Grenada, with Captain John Loring assuming the acting command of the Bellerophon in mid-April. Before he could take up his post Cranstoun died on 22 September at Bishops Waltham in Hampshire, apparently by drinking cider that had been kept in a lead-lined vessel. He was buried with honours at the Royal Garrison Church in Portsmouth.

On 19 August 1792 he married Elizabeth, the daughter of Lieutenant-Colonel Lewis Charles Montolieu. She died at Bath on 27 August 1797, aged 27, her health broken by her bereavement the year before. The couple had no issue and Cranstoun s title passed to a young nephew.