1732-1808. He was the youngest son of Edward Saxton, a London merchant, and of his wife, Elizabeth Bush.

Saxton entered the service in January 1745 aboard the Gloucester 50 as captain s servant to Charles Saunders, with whom he remained for three years. He then joined the Plymouth guardship Eagle 60, Captain Richard Collins, moving on to the St. Albans 64, Captain Hon. John Byron, in which he served off Guinea in 1749. He passed for lieutenant on 3 January 1753, and after going out to the East Indies was promoted lieutenant by Rear-Admiral Charles Watson on 2 January 1757.

Upon returning home Saxton spent a short period in 1760 aboard the Modeste 64, Captain Henry Speke, before he was promoted commander of the Flamborough Prize 14 on 11 October, which vessel he recommissioned for the Downs squadron. In October 1761 he removed to the Senegal 14, being employed in home waters. 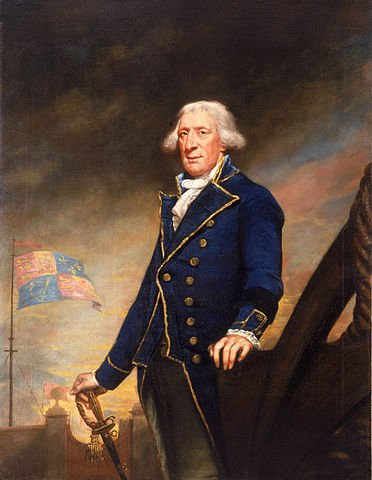 On 28 January 1762 he was appointed flag captain to Commodore Viscount Howe aboard the Magnanime 74, and he remained with this vessel until June 1762 when Howe removed to the Princess Amelia. Saxton thereafter had the Monmouth 70 in the Channel on a temporary basis from September 1762 through to the end of the war in 1763.

After the peace he recommissioned the Pearl 32 in March 1763 for Newfoundland, serving in the St. Lawrence waterway and being sent to ascertain the French strength there in 1764. After being paid off in 1766 he was appointed to the Phoenix 44 in October 1770, remaining with her but a short time pending the end of the Falkland Islands dispute, and paying her off in January 1771. He almost immediately recommissioned the Flora 32 for service in home waters, retaining her until the end of the year.

In the late summer of 1778 Saxton joined the Winchelsea 32, going out to the West Indies in September but returning in the following year with the Jamaica convoy and miraculously managing to avoid the great allied armada that was at the time stationed in the mouth of the Channel. The Winchelsea was paid off later in the year.

Saxton took command of the Invincible 74 in May 1780 following the death of her previous commander, Captain Hon. George Falconer, and he served in the Channel fleet campaign of June-December 1780. At the end of the year he went out to the Leeward Islands with Rear-Admiral Sir Samuel Hood s squadron, but temporarily had to convalesce ashore through illness. The voyage out to the West Indies itself had been delayed by a mutiny caused by his men s non-payment, which fortunately ended peacefully.

He was present at the capture of St. Eustatius on 3 February 1781, and although Captain Richard Hussey Bickerton was acting for him at the time of the Battle of Fort Royal on 24 April he was present but barely engaged at the Battle of Chesapeake Bay on 5 September, and was also present but barely engaged at the Battle of St. Kitts on 25/26 January 1782. Shortly afterwards he was transferred to the Jamaican station where he remained until the peace, thereby missing the Battle of the Saintes. The Invincible sailed to North America with Admiral Hugh Pigot thereafter, and was one of the vessels sent under Rear-Admiral Sir Samuel Hood to observe the French at Boston. On 19 February 1783 the Invincible recaptured the Argo 44, three days after she was taken by the French frigates Amphitrite 36 and the Nymphe 32, and she returned to England later in the year.

Saxton sat on a commission to enquire into the Impress Service in 1787, and he became commissioner of the navy at Portsmouth on 13 March 1790, a position he held until 1806, during which time he launched such vessels as the Dreadnought 98. At the end of his tenure he fell out with the Earl of St. Vincent over the terms of his retirement, and he then repeated the offence with Viscount Howick in 1806 when that politician, previously known as Hon. Charles Grey, briefly served as the first lord of the Admiralty.

On 19 July 1794 he was created a baronet on the occasion of the King s visit to Portsmouth, and he died at Gloucester in November 1808.

Saxton married Mary Bush of Burcott, Oxfordshire on 11 May 1771 and had three sons and four daughters. He was succeeded by his eldest son Charles in the baronetcy, this gentleman serving as the M.P. for Cashel from 1812-18. His eldest daughter Philadelphia Hannah married Admiral Robert Oliver, but his other three daughters all died young. The family owned Circourt Manor, Denchworth, Berkshire.

Nelson, who had known Saxton in the West Indies, and who visited him at Portsmouth dockyard on his last day in England, described him as a rough sailor . He nevertheless appears to have been a diligent if under-stated commissioner.