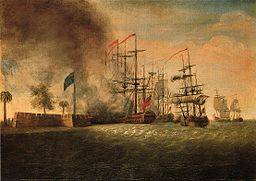 The aborted attack on Charleston 1776

Caulfield was commissioned lieutenant on 20 July 1759, and was wounded when serving aboard the Bristol 50, Captain John Morris, flying the broad pennant of Commodore Sir Peter Parker at the unsuccessful attack on Charleston on 28 June 1776

As a reward for his conduct at Charleston he was promoted commander of the bomb Thunder 14 on 5 July 1776, although this appointment was for purposes of rank only, for the next day, 6 July, he was posted captain of the Bristol 50 to replace his late captain, John Morris, who had been fatally wounded during the attack. Both commissions were later confirmed by the Admiralty on 7 October 1777.

Continuing to fly Sir Peter Parker’s broad pennant aboard the Bristol, Caulfield commanded a division of boats in the landings on Long Island during the New York campaign of July – October 1776, and after exchanging with Captain John Raynor into the Chatham 50 in September he was present with Parker’s broad pennant in the occupation of Rhode Island on 8 December.

In 1778 he went out to Jamaica, to which station Parker had been appointed commander-in-chief, and he replaced Captain Raynor as flag-captain once more aboard the Bristol 50. He was ill ashore at Jamaica when the Bristol was present in Commodore Hon. William Cornwallis’ defensive actions with the French in the Windward Passage on 20-22 March 1780 and on 20 June, in which engagements Captain Hon. Thomas Pakenham acted for him. During the Great Hurricanes that October the Bristol was dismasted.