Sykes joined the Navy on Christmas Day 1783 as a captain s servant aboard the Resource 28, Captain Paul Minchin, which vessel served for the next five years at Halifax, Nova Scotia. From May 1787 he saw service on the Newfoundland station with the sloop Merlin 18, Captain Edward Pakenham, and he became a midshipman aboard the yacht Royal Charlotte, Captain Sir Hyde Parker, in the spring of 1789.

Removing in January 1790 to the exploration vessel Discovery 10, Commander Henry Roberts, he briefly served aboard the Courageux 74, Captain Alan Gardner, from July during the Spanish Armament before rejoining the Discovery in December and seeing duty as a midshipman in Captain George Vancouver s voyage of exploration to the Pacific Coast of North America from 1791-5. He was present in the boat commanded by Acting-Lieutenant Spelman Swaine which came to the rescue of their commander and Lieutenant Peter Puget when they were attacked by hostile natives, and he also earned a reputation for his sketches of some of the areas surveyed. 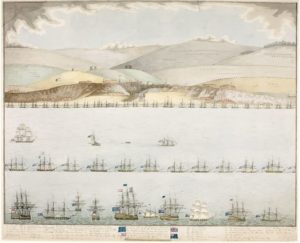 Sykes took part in three raids on Boulogne in 1804

Sykes was commissioned lieutenant on his return to England with seniority from 6 November 1795, and he joined the sloop Swallow 18, Commander George Fowke, which was employed in the North Sea. When she was sent out to the West Indies in the following month he removed to the Goliath 74, Captain Charles Henry Knowles, before assuming duties under the flag of Vice-Admiral George Vandeput from February 1796 aboard the St. Albans 64, Captain William Lechmere, conveying the trade to Lisbon and the Mediterranean. From 25 May 1797 he was with the same officers aboard the Resolution 74 off the coast of North America, wintering ashore in the Chesapeake when Halifax became iced up, and in August 1798 he removed with the flag to the Asia, 64, Captain Robert Murray, serving as her first lieutenant.

Sykes was promoted commander on 18 June 1800, and having recommissioned her at Woolwich in May 1803 he commanded the bomb Hecla 8, bringing a convoy from Hull to Portsmouth in September. Later in the autumn the Hecla was off Boulogne before returning in November to Deal. On 16 and 23 July, and on 1 August 1804, Sykes served in the attacks on Le Havre that were led by the captain of the Melpomene 38, Robert Dudley Oliver, and the Hecla remained off that port for the rest of the year bar the occasional return to Portsmouth.

He subsequently commanded the sloop Nautilus 18 in home waters from March 1805, in which vessel he fell in with the schooner Pickle, Lieutenant John Lapenoti re, as she raced home with Vice-Admiral Cuthbert Collingwood s despatches relating to the Battle of Trafalgar. Having delivered the news to the British consul at Lisbon, the Nautilus was sent home to Plymouth, and hastening to London Sykes arrived at the Admiralty gates in Whitehall at the same time as the Pickle s commander, although it was Lapenoti re who had the honour of delivering his dispatches first.

Sykes was posted captain on 22 January 1806 and saw further service in command of the Diomede 50 from March until November 1808 with the flag of the commander-in-chief at Guernsey, Rear-Admiral Sir Edmund Nagle. From the following spring he fulfilled the same role to Vice-Admiral Nagle on the Leith station in command of the Adamant 50, although this vessel did participate in the early stages of the Schelde Expedition from July – December 1809. In October she entered Chatham dockyard for repairs having gone aground in the Swin, and at the end of November she went round to Gillingham to be fitted out as a guard ship for duty at Leith. In May 1810 the Adamant returned to Sheerness from Leith with two hundred Danish prisoners and Sykes left her shortly afterwards to remain on the beach for the next fifteen years.

In September 1810 he attended a levee held by the King, and during his semi-retirement he was often listed as a fashionable arrival in the newspapers, visiting various popular establishment towns such as London, Dorking, and Brighton. From June 1825 he commanded the Ocean 80 with the flag of Vice-Admiral Lord Amelius Beauclerk in the Tagus for two years, and after going ashore again he continued to be seen in fashionable circles and at levees. His final employment was as flag-captain to Admiral Beauclerk from April 1836 until August 1837 aboard the Royal Adelaide 104 at Plymouth.

Sykes was promoted rear-admiral on 28 June 1838, vice-admiral on 1 June 1848 and admiral on 3 July 1855, during which years he maintained his position amongst society s elite.

He died on 12 February 1858 at his residence of Castle Hill, Englefield-Green, Surrey.

Sykes married the daughter of Edward Earl, chairman of the Scottish Customs Board, on 2 June 1811 at her father s residence in Edinburgh. His sister married the future Rear-Admiral Richard Byron. He was a deputy-lieutenant for Surrey, and his London address in later years was given as Wilton Crescent, Belgravia.