1728-89. He was baptised on 14 September 1729, having been born a year before at the ancestral Drake home of Buckland Abbey in Buckland Monachorum, Devon. He was the fourth born but third surviving son of Sir Francis Henry Drake, the 4th baronet in the line of succession from the conqueror of the Spanish Armada, Sir Francis Drake, and of his wife, Anne Heathcote. His immediate elder brother was Vice-Admiral Francis William Drake.

Francis Samuel Drake was schooled at Plymouth from the age of twelve, and only entered the Navy at the age of sixteen as something of an afterthought on behalf of his widowed mother, the boy having returned from school to the family home without a plan for his future.

He was commissioned lieutenant on 21 August 1749 and served aboard the Torrington 44, Captain Thomas Hutchenson, going out to Newfoundland in 1751 and North America in April 1753. Further employment was aboard the Otter 14, Commander Edward Le Cras, and from the early part of 1755, Commander Alexander Innes, although a clash of personalities with this officer saw him transferred in May to the Windsor 60, Captain Samuel Faulkner. Meanwhile, to the wrath of his family, he had quickly squandered a patrimonial inheritance and made matters worse by marrying a penniless young woman. 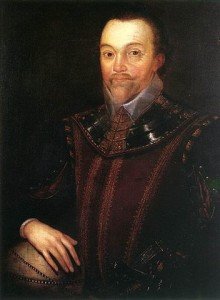 Sir Francis Samuel Drake was descended from the great Elizabethan adventurer of the same name.

Drake was promoted commander of the newly commissioned sloop Viper 10 on 30 March 1756, serving out of the Downs, and he was posted captain into the Biddeford 20 on 15 November of the same year.

On 11 March 1757 he exchanged with his ailing brother, Francis William Drake, into the Falkland 50 as part of a special arrangement between his oldest brother and the first lord of the Admiralty, Lord Anson. Escorting a large convoy, his command arrived at Portsmouth from the Downs on 3 May, and after a spell in the harbour she moved down to Spithead on 21 May, prior to reaching Plymouth three days later and convoying eight transports to Cork, where she arrived on the 29th. Departing Ireland for South Carolina with the Highland Regiment and the West Indies convoy on 27 June, the Falkland later sailed for the Leeward Islands and at the turn of the year sent a captured 4-gun Guadeloupe privateer into Barbados.

In the summer of 1758, the Falkland departed the Leeward Islands with an eighty-sail convoy, and by early August she was at Spithead, having deposited the merchantmen in the Downs and thence delivered another convoy to the Hampshire port. Towards the end of September she sailed for Plymouth, remaining there throughout the autumn before returning to Spithead in the week before Christmas where it was reported that she would be paid off. Evidently she remained in commission however, for on 15 February 1759 she sailed from Portsmouth for St. Helena with an East India convoy of twelve vessels and three other men-of-war, and she was back in Portsmouth by 20 August to briefly host the flag of Rear-Admiral George Brydges Rodney. She then joined Commodore John Reynolds’ squadron off Lorient before serving under Commodore Robert Duff off Brittany in the autumn of 1759, and being present at the Battle of Quiberon Bay on 20 November.

In February 1760 the Falkland was at Plymouth when a storm drove her from her moorings in the Hamoaze, and at the beginning of March she sailed for North America under the orders of Commodore Robert Swanton. Following the relief of Quebec, she arrived at Halifax with Rear-Admiral Lord Colville on 24 October, and in the spring of 1761 she sailed for New York to collect troops and convey them to the Caribbean. Departing in early May with that convoy, she thereafter saw employment with Admirals Sir James Douglas and Rear-Admiral Rodney in the Leeward Islands, being present at the surrender of Dominica in January 1761 and the capture of Martinique in June 1762. Although the Falkland eventually arrived back in the Downs with Admiral Douglas in September, it appears that Drake remained in the Leeward Islands, for in November his appointment to the Vanguard 68 on that station was confirmed, and on 18 January 1763 he transferred to the Rochester 50, also serving in Leeward Islands. Commanding the latter vessel, he returned to Portsmouth on 10 February 1764 after a five-week passage from St. Kitts with Rear-Admiral Swanton’s small squadron. After going out on a cruise, the Falkland then entered the Downs towards the end of March and was paid off at Chatham in April.

With the war against the American colonies attracting the interest of France, Drake was appointed to the Russell in January 1778, and on 14 February this vessel departed Chatham for Blackstakes to take on her powder prior to joining the fleet at Portsmouth. After sailing for North America with Vice-Admiral Hon. John Byron’s fleet on 9 June, she lost company off the Newfoundland Banks on 8 July in the great storm which disrupted the passage of that expedition, and she was forced back to Lisbon and eventually Plymouth. In December she sailed under the orders of Vice-Admiral Lord Shuldham from Portsmouth with the West and East India convoys, but whilst still in the Channel she rammed a merchantman, the London, which sunk inside a half-hour with one hundred fatalities. The Russell was obliged to return to Spithead where the opportunity was taken to copper-bottom her, and this docking allowed Drake to sit on Admiral Hon. Augustus Keppel’s court-martial subsequent to the Battle of Ushant on 27 July 1778. The verdict in Keppel’s favour evidently pleased him, as his preferment was for the commander-in-chief over his rival, Vice-Admiral Sir Hugh Palliser.

The Battle of the Saintes 1782

In May 1779 he sailed with Vice-Admiral Marriot Arbuthnot’s convoy for North America, the force being temporarily diverted to protect Jersey from a French invasion, and in October he was reported to be off Sandy Hook with a commodore’s broad pennant, and with four sail of the line, several frigates and transports under his orders. After joining the expedition to attack Charleston in the spring of 1780, he had to return to New York before its capture on 11 May, as the Russell and the other sail of the line had been unable to cross the bar. He remained for a short time in command at New York, and then hoisting a broad pennant, and with Captain Robert Haswell commanding the Russell, he sailed to join Admiral Sir George Rodney in the Leeward Islands. On 17 June however, he left the Russell at Barbados and on 21 July arrived at the Admiralty with Rodney’s dispatches.

The promotions to rear-admiral on 26 September 1780 were extended to include Drake because he was one of the few officers prepared to fight for the government, and he raised his flag aboard the spacious Princessa 70, Captain Sir Thomas Rich, which sailed for the Leeward Islands at the end of November with Rear-Admiral Sir Samuel Hood’s reinforcements. Later shifting his flag to the Gibraltar 80, Captain Charles Knatchbull, Drake was left to watch Martinique with six sail of the line covering four French ships when Rodney sailed to attack St. Eustatius on 3 February 1781. He subsequently served under Hood at the blockade of Martinique, and the Gibraltar was engaged at the Battle of Fort Royal on 29 April, where she lost five men killed and six wounded.

In May 1781 Drake was sent to protect Tobago with six sail of the line, but unfortunately the Comte de Grasse arrived there with the French fleet before him and he was obliged to retreat to Barbados. He shifted his flag back to the Princessa when sailing with the fleet to North America in August, and he commanded the van at the disastrous Battle of the Chesapeake on 5 September following which, and as a result of damage to his flagship, he temporarily transferred to the Alcide 74, Captain Charles Thompson.

Drake sailed back to the West Indies with Hood in December 1781, and he was present at the Battle of St. Kitts on 25/26 January 1782. He subsequently commanded the van under Rodney at the Battle of the Saintes on 12 April, and he was honoured for his part in the victory by being created a baronet on 28 May and being granted the freedom of the City of London. Following the battle he was detached by Hood with eight sail of the line, and by June he was off Jamaica with a reported eighteen sail of the line. During February 1783 he was cruising off Martinique with the bulk of the Leeward Islands fleet whilst the new commander-in-chief, Admiral Hugh Pigot, was at Barbados, and he remained in the West Indies until the peace, although towards the latter part of this period he became ill with fever at St. Lucia and was reported to be on the point of death. When he returned home to Portsmouth on 17 May 1783 with his flag aboard the Duke 90, Captain Alan Gardner, it was under the care of the physician of the fleet, and in command of three other sail of the line and a frigate.

In August 1786 Drake sat on the Board of Green Cloth with a small number of other notables, including prime minister William Pitt, which interrogated Margaret Nicholson after she had attempted to murder King George the day before, and during the Dutch Armament in 1787 he raised his flag at Portsmouth aboard the Ganges 74, Captain Sir Roger Curtis, prior to assuming command of the port in early December for a few weeks with his flag aboard the Barfleur 98, Captain John Knight, when the commander-in-chief, Vice-Admiral Lord Hood, attended parliament.

On 12 August 1789 Drake was appointed a junior lord of the admiralty, a position he held for only three months before his death on 18 November after being taken suddenly ill at an Admiralty Board meeting. In the same year he had been nominated as the M.P. for Plymouth in the Admiralty interest but he never took his seat. His remains were taken to Deal for internment.

Drake was firstly married at the age of twenty-two in 1750 to Elizabeth Hayman of Deal, a young lady of humble birth whom his family initially disowned but later came to admire for her intelligence. She died in February 1786. On 22 January 1788 at Dunsborough House, Ripley, Surrey, Drake married a somewhat high maintenance lady of half his age, Pooley Onslow, the daughter of the M.P for Guildford, Lieutenant-Colonel George Onslow. He did not have any issue from either marriage. In 1775 he bought a home known as ‘Prospect’ to the north of Plymouth and about seven miles from the family home at Buckland Abbey. He later purchased the Send Grove estate near Guildford after returning from the West Indies in 1783.

Drake was much admired for his abilities by Rodney. He was known as ‘Sammy’ to his family and after his early misadventures settled down to become an active, zealous and dedicated officer.