1726- 1784. Of Scottish descent, he was the third son of John Hamilton of Chilston Park near Maidstone in Kent, who was also the sheriff of that county, and of his wife, Mary Wright. He was the father of Admirals Sir Charles and Sir Edward Hamilton, and he was related to James Hamilton, the 8th Earl of Abercorn.

Hamilton was commissioned lieutenant on 11 January 1747 and promoted commander on 7 April 1762 of the small sloop Cormorant 8, which sailed out of Portsmouth for the Downs on 8 May and remained there for three months before going up the Thames to Sheerness. She had returned to the Downs by 20 September, where she again remained largely inactive for a number of weeks until departing with a convoy for Portsmouth on 16 November. Twelve days later, she reached the Downs with a return convoy, and she was paid off on 13 December.

Not long after the end of the Seven Years War, Hamilton was appointed to the sloop Zephyr 10 on 11 April 1764, taking her out to Newfoundland from Portsmouth in May. After returning home at the end of the year, as was the custom, his command was docked at Portsmouth in February 1765 before she sailed once more for Newfoundland towards the end of April to be engaged in the protection and management of the fishery. On 30 October she reached England with express dispatches from the commander-in-chief at St. Johns, Commodore Hugh Palliser.

No doubt benefitting from the influence of his family, Hamilton continued in peace-time employment, being appointed on 8 February 1766 to the sloop Merlin 18, which was commissioned at Woolwich that month, prior to going out to Newfoundland from Plymouth in May. Assuming the role of governor of the coast of Labrador, Hamilton detained a French vessel which had been fishing illegally shortly afterwards, whilst later in the year he detained two vessels from Quebec which had been engaged in illegal trading with the native population. The Merlin was back at Deptford by December where she was ordered to fit out for service in the Channel. 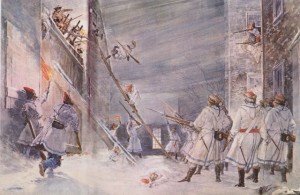 By 6 April 1767, the Merlin was in the Downs before going around to Spithead and then almost immediately sailing back to Newfoundland. When she arrived home after the end of the season at the beginning of November, it was with several natives who wished to complain to the government about encroachment by ‘their neighbours’, along with thirty Frenchmen who had ‘broken through their boundary’. The Merlin then entered dock at Portsmouth to be paid off and fitted out for further Newfoundland service, whereupon he left her.

Hamilton was posted captain of the frigate Active 28 on 26 May 1768, but this was apparently for purposes of rank only, as it does not appear that this vessel saw any active service for several years.

In June 1775 Hamilton recommissioned the frigate Lizard 28 at Portsmouth, which went out of harbour to Spithead in early August, and after the crew had been paid two months wages she sailed on the 10th of that month for Quebec with express dispatches for Major-General Sir Guy Carleton, the British governor and commander-in-chief in Canada. Arriving at Quebec on 4 November via Boston with supplies for the army and twenty thousand guineas, Hamilton formed a battalion of seaman ashore with the rank of colonel to assist in the defence of the city. Here, despite men and supplies being desperately deficient, he stiffened the resolve of the lieutenant-governor who had been preparing to surrender to the Americans pending the arrival of Carleton from Montreal. After leaving the Lizard and returning to England on 10 June 1776 with dispatches aboard the sloop Hunter 10, Commander Thomas Mackenzie, Hamilton was created a baronet on 6 July for his services at Quebec.

In the meantime, on 3 July 1776, he was appointed to the new ship of the line Hector 74 at Portsmouth, which vessel sailed out of harbour for Spithead at the end of October. Serving initially as a Portsmouth guardship, she went out on a cruise in the following March and again in May, taking a number of small prizes on both occasions. In July she put to sea with several other sail of the line to protect the incoming West India convoys, but she was forced to return to Portsmouth on 22 August having lost her main topmast and split several sails in unseasonal gales, thereby necessitating a spell in the dockyard. After leaving the harbour for Spithead at the beginning of October, she enjoyed further cruises over the next few months, in the course of which she sent a French ship laden with military stores for the American rebels into Portsmouth.

With war against France imminent, the Hector briefly flew the flag of Vice-Admiral Sir Robert Harland at Spithead towards the end of March 1778 before another cruise in the Bay of Biscay during April yielded a further French vessel sailing for America with ordnance for the rebels. At the end of May, as the ever-expanding Grand Fleet continued to assemble at Portsmouth, she was sent out with Harland’s small squadron to search for the French fleet which was believed to be at sea, and in the preliminaries before the Battle of Ushant on 27 July she enforced the detention of the French Licorne 32 after that frigate had been brought to by the Milford 28, Captain Sir William Burnaby. She was subsequently present but barely engaged in the battle itself, and she remained at sea monitoring the French in the aftermath of the engagement.

Continuing with the Grand Fleet, in October 1778 the Hector sent a large Nantes-bound French West Indiaman into Portsmouth, whilst at the turn of the year Captain Anthony Hunt deputised for Hamilton when the latter was required to provide evidence at Admiral Hon. Augustus Keppel’s court martial pertaining to the Battle of Ushant. Continuing with the Channel Fleet thereafter, the Hector was docked at Portsmouth in April and Hamilton was then required to give evidence at Vice-Admiral Sir Hugh Palliser’s court martial, which also related to his conduct at the Battle of Ushant. Once back at sea, the Hector took a couple of Spanish prizes towards the end of June which were sent into Falmouth, and she participated in the Channel Fleet’s celebrated retreat during August. She continued to serve with the fleet through to the middle of November when the bulk of that force retired to Portsmouth and she made for Plymouth.

At the end of December 1779, the Hector sailed from Plymouth with the expectation that she would join Admiral Sir George Rodney’s Gibraltar-bound fleet, but she was detached with the West Indies trade before the Moonlight Battle, and thereafter continued on to Jamaica where she arrived in early March. At the end of April she returned to Port Royal after a cruise, and she was present at Captain Hon. William Cornwallis’ retreat from Commodore de Ternay’s larger squadron on 20 June. The squadron was back at Port Royal by 20 July and the Hector later put out on 6 September with thirteen sail of the line under the orders of Rear-Admiral Joshua Rowley to escort the homeward bound trade through the Gulf of Florida, with five of the sail of the line continuing on to England. Shortly afterwards on 5 October, the Hector survived the Great Hurricane when the remaining sail of the line under Rowley were caught by the storm whilst sailing between the Bahamas and Bermuda, although not without her main mast crashing down just above the quarterdeck, the foremast being lost about fourteen feet from the top, the mizzen mast just below the cross tree, and the bowsprit within the cap. Despite nine and a half feet of water in the hold she was able to limp back to Jamaica, and after rejoining Rowley she arrived at Port Royal on the 26th, having been forced to jettison her guns, and with her men constantly at the pumps.

On 7 August 1781 the Hector arrived at Portsmouth from Jamaica with a convoy, whereupon she entered dock for lengthy repairs. Although it was reported that Hamilton had been appointed to the Pegase 74 in June 1782, it appears that he was not actively re-employed until early November when he was re-appointed to the Hector, although it seems unlikely that he ever took her to sea again.

On 27 December 1782 Hamilton was appointed to the Grafton 74 in place of the sickly Captain Stair Douglas who had resigned the command, and he set sail from Portsmouth on 16 January 1783 with a small squadron under the orders of Captain Robert Brice Kingsmill, which it was intended would attack Spanish possessions in South America before sailing around Cape Horn to the East Indies. Unfortunately, the Grafton was dismasted in the Bay of Biscay days after her departure to be forced home by the end of the month. Hamilton was thus available to sit on the court martial which investigated the loss of the French prize, Hector 74, during the Central Atlantic Hurricane in the previous September, and after paying the Grafton off in April, he immediately recommissioned his old command, the British Hector 74, as a guardship at Portsmouth. In December he sat on the court-martial of Captain Evelyn Sutton of the Isis 50, conversant with that officer’s conduct at the Battle of Porto Praya in 1781, but his attendance was reportedly at the jeopardy of his health which had long been in decline as a result of yellow fever sustained in the West Indies.

On 3 October 1763 he married Cassandra Agnes Chamberlayne of Maugersbury, Gloucestershire, niece to the Duke of Chandos, and the sister of the future Admiral Charles Chamberlayne. She was described as ‘an amiable young lady with a genteel fortune’, and they had issue the two children mentioned above.

Hamilton enjoyed a reputation as a brave officer who was well liked, and his premature death was regarded as a great loss.