Bateman entered the service as a common seaman and probably earned his promotion to officer rank through bravery in action. By the time he was commissioned lieutenant on 5 July 1756 he had already served aboard a dozen ships, either as a seaman, midshipman or master s mate, and he was further promoted commander on 22 September 1759, being appointed to the sloop Hunter at Quebec.

On 31 March 1760 he was posted captain of the Eurus 20, being attached to Commodore Lord Colville s squadron in the St. Lawrence River in support of operations against the French at Montreal, but his command was wrecked on 20 June. He became flag captain to the commander-in-chief, Commodore Lord Alexander Colville, aboard the Northumberland 70 in North America on 22 September, returning with this ship to England in November 1762.

From February 1763 until July 1764 Bateman commanded the Ludlow Castle 40, going out to West Africa and returning from Antigua to Spithead in June 1764. He then had the guardship Bellona 74 at Plymouth from 1766-7.

On 20 February 1776 he was appointed to the Winchelsea 32, going out to Jamaica in May, and remaining on that station throughout the following year where he cruised off the Caicos Islands, and later off Cap François. Having returned home he joined the thirty year-old Yarmouth 64 on 25 July 1778, and sailed in December to reinforce the Leeward Islands fleet. 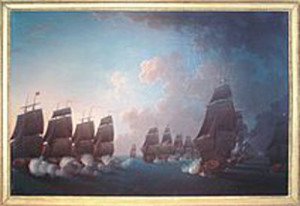 Bateman commanded the Yarmouth at the Battle of Grenada on 6 July 1779, although his ship did not suffer a single casualty. Following the Battle of Martinique on 17 April 1780, he was charged by the commander-in-chief, Admiral Sir George Rodney, with failing to attack the French flagship during the initial stages of the battle and was deprived of the command of the Yarmouth. Even so, he was retained aboard her and was a spectator throughout the remainder of the Leeward Islands campaign from May to July, including the fleet skirmishes in the former month when his ship suffered casualties of five men killed and fifteen wounded. His bravery was beyond doubt, as evidenced by the fact that the Yarmouth had sustained twenty casualties, and in effect his crime was nothing other than to misunderstand his commodore s interpretation of Rodney s signals, and to lie-to awaiting further instructions. Nevertheless, at the resultant court martial in New York some five months later presided over by Commodore Sir Chaloner Ogle, Bateman was found guilty of failing to support his admiral and was dismissed the ship, apparently giving his judges the benefit of his own opinion on his way

Bateman became a superannuated captain shortly afterwards, thereby ensuring that he received a pension, but he never served at sea again and disappeared into obscurity.

He married Hannah Sall in 1767 and had two daughters and a son, Charles Phillip Bateman, who rose to the rank of admiral.

Captain Cook served as a master on the Northumberland under Bateman and held him in high regard, naming Bateman s Bay in New South Wales in his honour. His dismissal from his command was viewed as a harshness bordering on cruelty by a later commentator, and undoubtedly his contemporaries shared this view.