1732-1800. He was a native of the Channel Islands, the youngest of four sons of Louis Ourry who himself was the son of a Huguenot refugee, and of his wife Anne Louise Beauvais. He was the younger brother of Captain Paul Henry Ourry, the resident commissioner at Plymouth from 1775 until his death in February 1783, of Captain Isaac Ourry, and of Captain Lewis Ourry who served in the American Regiment of Foot during the Seven Years War.

Ourry was commissioned lieutenant on 9 July 1755 and served in the East Indies aboard the Lenox 74, Captain Robert Jocelyn. Promoted to the rank of commander on 24 August 1761 by the commander-in-chief, Rear-Admiral Samuel Cornish, he had the storeship Southsea Castle in the East Indies during 1762 whilst his elder brother Isaac commanded the Elizabeth 64 on the same station. During the capture of Manila by Rear-Admiral Cornish in the second half of that year he commanded the Panther 60 in an acting capacity for Captain William Newsom, and he then led a battalion of seamen ashore. Ourry was posted captain of the Norfolk 74 on 10 November 1762, and his promotions to commander and post captain were confirmed by the Admiralty on 9 August 1764 after he had returned to England. 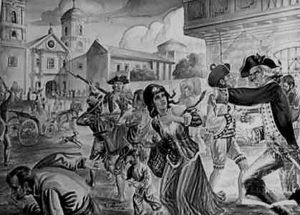 A depiction of the British occupation of Manila in 1762

During the Falkland Islands dispute of 1770 he briefly held the command of the Belleisle 64, retaining her until May 1771, and from January 1774 until March 1775 he had the Worcester 64 in home waters.

In February 1776 Captain Ourry joined the guardship Somerset 64 at Plymouth before going out to North America where he spent some time in blockade of Boston. In June 1777 the Somerset and Mercury 20, Captain James Montagu, arrived at New York with a number of transports, having successfully protected them from an attack by the rebel frigates Hancock 34 and Boston 24, a week before these ships captured the Fox 28, Captain Patrick Fotheringham, on 7 June .

The Somerset served in the Philadelphia campaign from August – November 1777 where, having been ordered to lead the advanced ships, Captain Ourry received a great deal of criticism from Captain Andrew Snape Hamond for failing to reconnoitre a satisfactory position from which to fire upon the enemy forts in the Delaware, and then for refusing to move into the attack without a pilot. His cause was little helped by the fact that he had been allowed two weeks to plan the attack, and unsurprisingly the commander-in-chief, Vice-Admiral Lord Howe, also censured him for his conduct. During the campaign Captain Ourry presided over the court-martial into the loss of the Augusta 64, Captain Francis Reynolds, in the Delaware on 23 October.

In July 1778 he commanded the Somerset in the defence of New York and in August he had her in the Rhode Island manoeuvres against the French fleet. Unfortunately his command was wrecked in a ferocious gale on the Peaked Hill Bar on the northern tip of Cape Cod on 2 November, all the crew bar twenty-three who drowned being made prisoner by the Americans. Whilst his officers and crew were removed to Boston, Captain Ourry and a lieutenant were marched under guard some one hundred odd miles to Providence, Rhode Island where he was exchanged for two American officers.

Upon returning to England Ourry was appointed to the Ocean 90 in late 1779, serving in the Channel Fleet campaign from June-December, at the relief of Gibraltar on 12 April 1781, in the June-November Channel fleet campaign, and in Rear-Admiral Richard Kempenfelt s brilliant assault on a French convoy on 12 December .He left the Ocean in early 1782

Ourry was never re-employed, and in 1793 became a superannuated rear-admiral. He died at his residence in Queen Square, Bath on 3 February 1800.

He married Hon. Amelia Newton and she died without issue in August following the death of Admiral Ourry.