Died 1814. He was the father of Rear-Admiral Augustus Brine and Captain George Brine.

Brine was commissioned lieutenant on 1 July 1766, in which rank he commanded the storeship Prince Frederick, going out to Madeira in September 1766.

He was first lieutenant of the Prince of Wales 74, Captain Benjamin Hill, the flagship to Rear-Admiral Hon. Samuel Barrington at the Battle of St. Lucia on 15 December 1778. Ten days later, on Christmas Day, he was promoted commander of the ex-American privateer Bunker s Hill, renamed the Surprise 18, which had been taken by the boats of the fleet off the island on the 23rd. 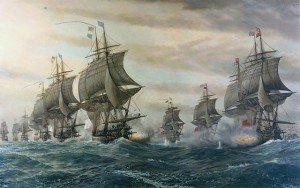 The Battle of the Chesapeake 1781

Removing to the captured French frigate Alcm ne 32 to commission her in October 1779, he was posted captain on 30 December, and served under the orders of Commodore William Hotham in the Leeward Islands. During the Great Hurricanes of October his command found sanctuary at Antigua after sailing from St. Lucia, but his consort, the Blanche 32, Captain Samuel Uppleby, was lost with all hands.

Brine served at the occupation of St. Eustatius on 3 February 1781, following which he removed to the Belliqueux 64 in succession to Captain Thomas Fitzherbert who had been sent home with dispatches, and fought at the Battle of Fort Royal on 29 April and was present but barely engaged at the Battle of Chesapeake Bay on 5 September before leaving her at the end of the year.

He was not re-employed during the long years of peace, but in1794 he rejoined the Belliqueux and commanded her under the orders of the commander-in-chief at Jamaica, Commodore John Ford, whose squadron took Port au Prince on San Domingo in a combined operation on 4 June. She was paid off in September 1795.

Brine had recently assumed command of the Glory 98 when the Spithead mutiny broke out on 16 April 1797, and he and his officers were ordered off the ship and bundled into a boat with little ceremony. He nevertheless rejoined the ship at the end of the mutiny, but over the following year disaffection still affected the Glory, as indeed it did a number of other Irish ships. On 12 March 1798 Brine and the first lieutenant, William Daniel, had to rush below to quell a disturbance caused by upwards of fifty men who were trying to get at the officers beer supply. A more serious outbreak was prevented when the intention of almost one hundred and fifty men to murder the officers and carry the ship into Brest were made known to the marine officer by a subordinate who could not bear the thought of having to kill Brine s young son, George. Eight men were later hung for their part in the plan.

Brine remained with the Glory until he was advanced to flag rank on 14 February 1799. In March 1803 he briefly removed his flag from the T m raire 74 which had been refitting, to the Venerable 74, Captain John Clarke Searle, and he served as second in command at Plymouth where his son George was his flag lieutenant from 1804-5.

Brine married firstly Jane Knight of Blandford St. Mary s, Dorset on 7 September 1767, and he soon leased Down House from Sir Thomas Pitt. His second wife, Alicia-Catherine, died in 1832 at Blandford. He was the father of Rear-Admiral Augustus Brine by his first wife, and also of George Brine who reached the rank of captain.