Having entered the Navy in November 1732 and passed his examination on 6 October 1739 Graves was commissioned lieutenant on 3 March 1740. During 1741 he served on the Norfolk 80with his uncle, Captain Thomas Graves, being present at Vice-Admiral Edward Vernon’s attack on Cartagena on the Spanish Main. In the second half of 1743 he was the first lieutenant of the Cumberland 80, Captains Peter Lawrence and William Burnaby, flying the flag of Rear-Admiral Sir Chaloner Ogle at Jamaica.

On 5 December 1743 he was promoted commander of the sloop Bonetta 8 at Jamaica by Ogle, and on 11 September 1744 was posted captain to the Rippon’s Prize 20 on that station. It was reported towards the end of 1745 that whilst in passage from New England to Jamaica he had captured a Spanish letter-of-marque of 30 guns bound from Cadiz to Vera Cruz following a sustained action in which two men had been lost, earning himself a cool £25,000 in the process. Shortly afterwards, on 1 December, he assisted the Biddeford 20, Captain Charles Powlett, in driving ashore and wrecking the Spanish privateer Golgoa 36, and having just parted from her consort the Rippon’s Prize took another Spanish privateer and then a French merchantman bound from Martinique for Bordeaux. Graves retained her command until she was taken out of service in May 1747 and broken up. 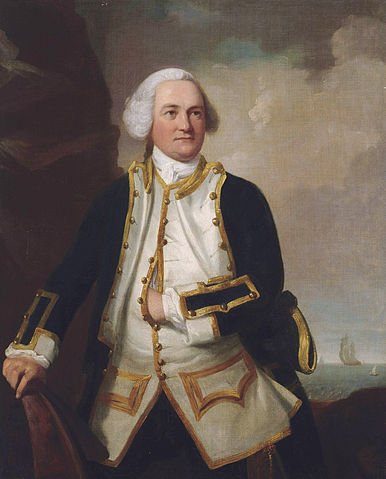 In the autumn of 1747 he joined the thirty year-old Enterprise 40 at Jamaica, with which he escorted a homeward-bound convoy through the Windward Passage in November before joining the Plymouth 60, Captain Digby Dent, and Worcester 60, Captain Thomas Andrews, in search of the San Domingo fleet. In August 1748 the Enterprise departed Jamaica with a convoy for England, and on arrival home was paid off.

In June 1756 Graves was appointed to the Duke 90 at short notice in place of Captain George Murray who had resigned, and which he joined at Plymouth before leaving her that winter. In June 1757 he commissioned the new Princess Amelia 80, from which he exchanged with Captain Stephen Colby into the Barfleur 90 in July, and he commanded her in Vice-Admiral Charles Knowles’ attack on the Basque Roads in September. The Barfleur was later with the grand fleet in the Channel under Admirals Lord Anson and Sir Edward Hawke in the spring of 1758. In May 1759 Graves rejoined the Duke, seeing action at the Battle of Quiberon Bay on 20 November, and he remained with this vessel, latterly on harbour service at Plymouth, until he was promoted a rear-admiral on 21 October 1762.

During the peace following the end of the Seven Years War Graves retired to his estate at Honiton where, in June 1763, it was reported that he held a celebratory bonfire and distributed hogsheads of cider to the populace on the occasion of the King’s birthday, this being a munificence that was conspicuously not replicated by other local landlords. He was further promoted to vice-admiral on 24 October 1770.

On 28 March 1774 he was appointed the commander-in-chief of the North American station, and after arriving at Boston on 30 June he attempted to carry out the ‘Boston Port Bill’, which banned seaborne trade with the town until it had paid compensation for the tea destroyed in the ‘Boston Tea Party’. Unfortunately his instructions from the government were unclear and a force consisting of the flagship Preston 50, Captain John Robinson, and thirty smaller vessels was unequal to the task of keeping order in the face of the growing rebellion, not least because his ships only carried peace-time establishments aboard. Consequently the American rebels had little difficulty in importing supplies and building up a force of privateers.

In early 1775 Graves’s small squadron was supplemented by three 64’s, the Somerset, Captain Edward Le Cras, Asia, Captain George Vanderput, and Boyne, Captain Broderick Hartwell, as the dispute with the colonies escalated. He participated in the Battle of Bunkers Hill on 17 June by directing the naval guns ashore, but his ill-advised authorisation of an attack on the rebel privateer base at Falmouth on 17 October was not a success, and indeed it was subsequently condemned by his own government. He also failed to act in concert with the army, and his idea that troops should lay waste to American property from April 1775 was not acted upon by the commander-in-chief, General Thomas Gage. Subsequently he also fell out with Major-General Sir William Howe when that officer assumed the command from Gage in September. It was thus of no surprise that Graves became a convenient scapegoat in the eyes of the weak ministry once the rebellion gained strength, and he was lobbied against to such an extent that the papers began to criticise the government for their treatment of him. As early as August 1775 the newspapers were reporting that he would be recalled, and on 27 January 1776 he was finally superseded at Boston by Rear-Admiral Lord Shuldham, returning home aboard the Preston and arriving at Spithead on 21 February 1776.

As some compensation for his recall the first lord of the admiralty Lord Sandwich, who had wished to stand by Graves, ordered the immediate promotion of his nephews, but in September 1777 he angrily refused the command at Plymouth, demanding instead an active position which was never likely to be offered to him.

Graves became an admiral on 29 January 1778 and died at his seat at Hembury Fort near Honiton on 8 March 1787. He was buried in St Mary and St Giles Church, Buckerell, Devon, alongside his first wife.

On 17 June 1750 at St. George’s, Hanover Square, London he married Elizabeth Sedgwick of Staindrop, County Durham, and following her death on 7 July 1767 he married Margaret Spinkes of Aldwinkle, Northamptonshire at All Saints Church, Aldwinkle on 14 June 1769. He did not have any children. His second wife was influential in his management of the North American station, and disagreements with Margaret Kemble-Gage, the wife of General Thomas Gage, was a factor in the unhappy relationship between the two commanders-in-chief.

Graves was described as ‘a good seaman and brave, and is very active, but somewhat severe, of few words, and rough in his manner’. In 1775 he infamously fought a street brawl in Boston with the Crown’s customs collector, Benjamin Hallowell, the father of the future Admiral Sir Benjamin Hallowell. Invariably, different accounts over the fracas surfaced, but the most likely outcome was that Hallowell broke Graves’ sword over his knee and gave him a black eye, but that Graves fists rendered the younger Hallowell blind for a week from the injuries he sustained.

Next Graves who wields the trident of the brine,
The tall arch-captain of the embattled line
All gloomy sate– mumbling of flame and fire,
Balls, cannon ships and all their damned attire;
Well pleased to live in never ending hum,
But empty as the interior of his drum.