In March 1779 he set sail for India once more as the second lieutenant of the Superb 74, Captain Robert Simonton, flying the flag of the new commander-in-chief of the East Indies station, Rear-Admiral Sir Edward Hughes, and he commanded the squadron s boats in the destruction of Hyder Ali s fleet at Mangalore in December 1780. Parr was promoted commander of the ex-French privateer Chasseur, renamed the Chaser 18, on 3 March 1781 at Bombay, and he was busily engaged supporting the army in the Bay of Bengal thereafter. 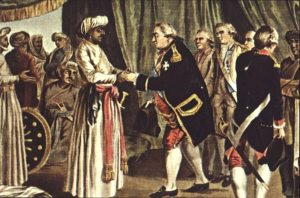 Hyder Ali and Commodore Suffren in 1782. Parr led the boats that destroyed the former’s fleet but then became a prisoner of the latter for the final year of the American War of Revolution

On 15 February 1782 the Chaser was taken by the French frigate Bellone 32 in the Bay of Bengal after a brief twenty minute action, a misfortune for Parr which was exacerbated when Captain Henry Reynolds of the Exeter 64 was killed at the Battle of Sadras two days later and Rear-Admiral, Hughes, having set aside the vacancy for Parr, had to pass him over when news of his capture was received. If that were not bad enough Parr had to witness the Battle of Sadras and that of Providien on 12 April whilst a prisoner aboard the French ship l Orient 74. For seven long months he was held in the French fleet as it remained at sea, and when he finally arrived at Mauritius aboard a sloop on 3 October he was suffering from scurvy for want of full provisions and having been confined for so long in unhealthy circumstances. He remained on the French Indian Ocean islands until the peace of 1783, whereupon he had to pay for his passage home aboard a French merchantman, departing in early October 1783 before transferring to an East Indiaman at St. Helena. The court martial regarding the loss of the Chaser was held in 1784 at Portsmouth, whereupon he was acquitted of any blame for his vessel s loss and complimented on his conduct.

In April 1795 he commissioned the ex-East Indiaman Malabar 54 which he took out to the Leeward Islands in the following February, having originally put out from Portsmouth with Rear-Admiral Hugh Cloberry Christian’ replacement convoy in December. Upon being despatched by Vice-Admiral Sir John Laforey, he led a small force otherwise consisting of one 64-gun ship, two frigates and a sloop that took the Dutch islands of Demerara and Essequibo on 23 April, and Berbice on 2 May. A number of lucrative merchantmen were also seized in addition to the Dutch ships Thetis 24 and Zeemeeuw 12, although unfortunately the latter two were soon lost. To make matters worse, having left Jamaica in July with a convoy for England the Malabar foundered on 10 October some six hundred miles off Cornwall, although her crew were safely taken aboard the Whitby merchant brig Martha.

In the early part of 1797 Parr joined the Standard 64, but under his command she was involved in the North Sea fleet s mutiny on 17 May, from which insurrection she sailed to join the Nore mutiny which had began on 12 May. During the latter part of that year he was appointed to the Nore flagship Zealand 64 with the flag of Vice-Admiral Skeffington Lutwidge, and thereafter he flew the flag of Vice-Admirals Andrew Mitchell from April 1799, and Alexander Graeme at the Nore from September.

Parr died on 17 June 1800, at which time he was enjoying the courtesy rank of commodore.

His wife s name was Wilhelmina and he had issue three daughters, the eldest of whom married Admiral John Ayscough.