Knell was commissioned lieutenant on 21 August 1778.

On 14 March 1779, whilst commanding the cutter Rattlesnake, he fell in with two French privateer cutters off the Isle of Wight and after a three hour engagement received the surrender of one. When the other attempted to escape he gave chase, and after firing three broadsides he carried her by boarding, although by then the first vessel had made good her own escape. During this action, in which he inflicted casualties of twelve men killed and thirty wounded on the enemy, he was one of twelve men wounded aboard the Rattlesnake, but as a reward for his gallant conduct he was promoted commander two days later.

In the latter part of 1779 the Rattlesnake was attached to Commodore George Johnstone s squadron off Cape Finisterre, and following the capture of the Spanish frigate Santa Margarita 28 on 11 November Knell brought her back to Portsmouth with the squadron in December. In the meantime he had been posted captain with seniority from 22 November. 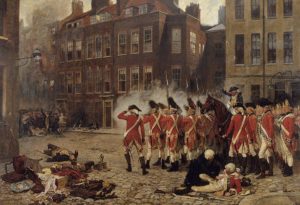 Whilst awaiting employment in 1780 Captain Knell was shot but not wounded during the Gordon Riots.

He remained in nominal command of the Santa Margarita thereafter, and in March 1780 was ordered to leave Sheerness and take three

sloops under his command for a cruise on the French coast. In the event the frigate was paid off in May to undergo repairs and be fitted with a copper bottom, so whilst he was seeking alternative employment he took lodgings in London. In the course of the Gordon Riots in June he let his curiosity get the better of him and ventured on to the streets. Somehow he was fired upon, but although the ball went through his coat, waistcoat and shirt it only grazed his skin, and it was still in his garments when he returned to his lodgings.

At the end of 1781 Knell was appointed to the Emerald 32 in succession to Captain Samuel Marshall, and in the latter part of 1782 was ordered to take a convoy of thirty-eight ships from the Carolinas to Jamaica. In the course of this voyage, on 2 January 1783, he detached the Endymion 44, Captain Edward Tyrell Smith, and the Magicienne 36, Captain Thomas Graves, in chase of a French convoy under the charge of the Sibylle 28, although they were unable to effect her capture. He saw his own convoy safely into Jamaica later that month, which was apparently the fifth occasion on which he had delivered a convoy without loss.

The Emerald was paid off after returning to England in September 1783 and he was not thereafter re-employed.

Knell was gazetted as a superannuated admiral in March 1799, even though he appears to have died in September 1798.