Williamson joined the navy in 1759 aboard the Dorsetshire 70, Captain Peter Denis, which ship fought at the Battle of Quiberon Bay on 20 November. In 1760 he transferred with this officer to the newly commissioned Bellona 74 in the grand fleet, remaining with her for nearly three years under the further command of Captains Robert Faulknor and Charles Ellys.

Following the end of hostilities he briefly served aboard the Siren 20, Captain William Paston, and after she was paid off at the end of 1763 the Deptford 60 with the same officer, prior to her also being paid off in the late spring of 1764. For the next two years he was aboard the Tamar, Captain Patrick Mouat, during her voyage around the world, and having been commissioned lieutenant on 8 March 1774 he joined the Ramillies 74, Captain Sir Edward Vernon, who was the commodore and commander-in-chief at the Nore. 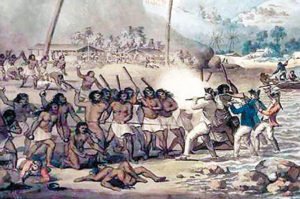 Captain Williamson earned infamy when he failed to assist Captain James Cook when the great explorer was attacked and killed in Hawaii in 1779.

Williamson served as a junior lieutenant aboard the Resolution in Captain James Cook s last voyage of exploration which departed England in July 1776. He was to be castigated by his shipmates for keeping his boat away from the beach when Cook was attacked and murdered on 14 February 1779. Williamson later claimed that he had misunderstand Cook s signal for help, but the slur on his reputation would never leave him, not least because he had failed to attempt the recovery of Cook s body. To compound matters he later refused the challenge to a duel from the Resolution s marine lieutenant. It was to his good fortune that the commander of the Resolution s consort Discovery, Commander Charles Clerke, died before reaching England, as this officer had intended to see Williamson court-martialled for his conduct on the day of Cook s death. In the event Williamson became a beneficiary of a re-organisation following Clerke s death when he became first lieutenant of the Discovery.

He was promoted commander on 3 October 1780, and in April 1782 recommissioned the Belleisle 64 for service in the Channel, being posted captain on 11 June. He then recommissioned the Crocodile 24, joining the Channel fleet and going out with a convoy to Newfoundland in October. Retaining this vessel after the peace, he went out to the East Indies in early 1783 but after returning home his command was wrecked off Start Point, Devon, on 9 May 1784.

Williamson remained unhappily unemployed for the next twelve years before joining the Grampus 54 in September 1795, joining Rear-Admiral Hugh Christian’s ill-fated convoy, then going out to Jamaica in the following March and returning to pay her off in September.

In October 1796 he commissioned the new Agincourt 64, which ship was involved in the Nore mutiny from 12 May 1797. At the Battle of Camperdown on 11 October 1797 the Agincourt did not suffer a single casualty, and Williamson was subsequently brought to a court-martial for cowardice, negligence and disaffection He was found guilty of disobeying signals and of not getting into action, but cleared of cowardice and disaffection after his court-martial at Sheerness lasting from 4 December to 1 January. The sentence, one of being placed at the bottom of the list of captains and rendered incapable of further service, appears to have broken him.

Williamson died on 27 October 1798 at his lodgings in Woodstock Street, near Bond Street in London after a short illness caused by an inflammation to the liver and bowels.

He married Frances Young of Dublin who died in 1812, and it was assumed they had no issue. His address was given as St. George, Hanover Square, Middlesex.

Although regarded as intelligent, Williamson was a most difficult and tyrannical individual who appeared to be disliked by all. One officer went so far as to state that he was a wretch, feared & hated by his inferiors, detested by his equals, & despised by his superiors; a very devil, to whom none of our midshipmen have spoke for above a year. Apparently he was involved in several challenges, including one against Lord Chatham when he was first lord of the Admiralty. Lady Spencer, wife of a subsequent first lord, went so far as to label him a blackguard .