On 4 February the exploratory vessel Resolution, Captain James Cook, in company with the Discovery, Commander Charles Clerke, departed Hawaii to commence their homeward voyage to England. They had left Plymouth over two and a half years earlier, and their voyage of exploration had taken them to Kerguelen Island, Van Dieman s Land (modern-day Tasmania ), Queen Charlotte s Sound on the south island of New Zealand, the Friendly Islands, the Sandwich Islands, Nookta Sound, the Bering Strait and the Arctic ice cap, prior to their return to Hawaii in the Sandwich Islands in December 1778.

Upon departing Hawaii again, the explorers left behind them the friendship of the natives who although prone to petty thievery had displayed a mixture of reverential awe and compassion in their dealings with Cook. The famous explorer could therefore have had few qualms about returning to Hawaii to effect repairs some days later when the two ships were overtaken by a storm in which the Resolution sprung her foremast. 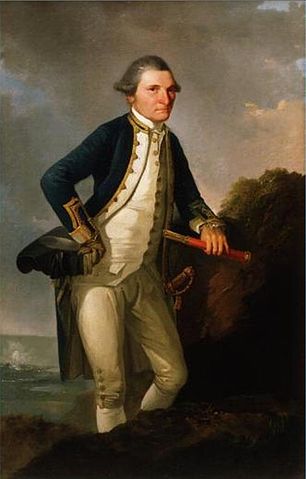 To the contrary, when the Resolution and Discovery returned to Kealakekua Bay in the islands on Thursday 11 February the greeting the Europeans received from some of the natives was surprisingly unfriendly. Although the islanders craft initially swarmed around the British ships with the usual goods for sale, the Hawaiian king, who was known to the British as Kerri Oboo, and several other chiefs made plain their displeasure at the expeditions return.

Over the next couple of days the carpenters went about repairing the foremast on the beach whilst the islanders began to add insolence and threatening behaviour to their habitual pilfering. This new-found belligerence was demonstrated by a protracted attempt to steal the armourer’s tongs. After the first theft Cook brought the miscreant on board the Resolution and had him flogged before restraining him in irons until the tongs were returned. Later in the morning a watering party was assailed with stones, and that afternoon another man came aboard the Resolution, grabbed the newly-recovered tongs, and made off with them. The subsequent boat chase and struggle to recover the tongs saw the British open up with musketry and the natives respond with more intense stone-throwing. It was a warning of what was to come.

That night the Resolution’s cutter disappeared. When the crime was discovered at daybreak the British sent out their boats to blockade the native canoes whilst Captain Cook went ashore with ten marines, including the lieutenant, Molesworth Phillips, to detain the King. His plan was to take Kerri Oboo on board the Resolution as a friendly hostage in order to obtain the return of the cutter and prevent any further misdemeanours. As usual Cook was treated with reverence by the natives who stood aside to let him pass, but upon making his way towards the town musket shots were heard from the direction of the boats that were guarding the canoes. Cook was never to know it, but this musketry killed one of the more prominent chiefs, Kalimu, and news of his death would soon reach the natives congregating on the beach.

Meanwhile the King had been awakened after a short delay, and being singularly anxious to please, and apparently being unaware of the theft of the cutter, he agreed to go with Cook. However when the party reached the beach the King s favourite wife threw her arms about him and the other natives made it clear that they opposed the detention of their leader. In the confusion a number of the islanders, their blood up following the killing of Kalimu, could be seen arming themselves, and in what appeared to be an attempt to distract the marines a holy man began chanting and dancing around them.

Sensing danger, Cook now decided to abandon his plan of taking the King aboard the Resolution. But it was too late; the situation had taken a decided turn for the worse.

A native armed with a dagger and a stone threatened Cook who responded by firing a small charge into the ground, intending to scare him off. Another armed islander began advancing upon Lieutenant Phillips who reversed his musket and butted away. Stones were then thrown at the marines, one of whom was felled. Cook shot point blank at one man who miraculously was unhurt. The sergeant of marines shot at another.

Now more natives began to surround the landing party, the marines opened fire, and when they attempted to reload the natives advanced in earnest. Offshore, Lieutenant John Williamson in command of the launch watched the attack and did nothing, but from two of the Resolution’s other boats, one of them commanded by Midshipman William Bligh, a fire was unleashed on the threatening crowd of natives. Cook ordered a retreat to the boats but four of his marines, still struggling to reload their weapons, were chased onto the slippery rocks, into the water and were cut down. At Cook s instruction the rest of the marines fled for the nearest boat offshore. 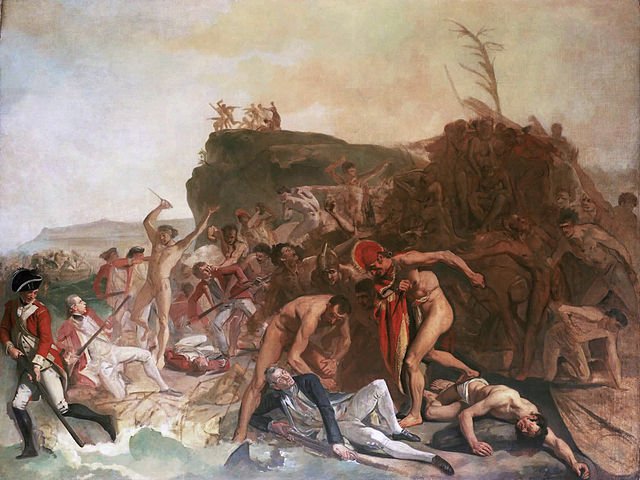 The death of Captain Cook

The great explorer was suddenly alone in front of the mob. A chief rushed at him with a club and struck a blow to his head. Cook responded by thrusting the man back with his musket. He was clubbed again with a blow that sent him to his knees. Crawling towards the water he was stabbed in the neck. Then more hands pushed him down, trying to drown him in the shallow waters. Desperately he crawled back on land again, but now knives and fists were flailing down upon him, and it was alone on the rocks amongst the pack of savages that he died; beaten, hacked, and stabbed to death.

On the beach the blood-letting continued before the Resolutions cannon fire cleared the mob away and allowed the mast and the other men ashore to be removed to safety. In total some twenty-six Hawaiians lost their lives in the gunfire, with scores more being injured. There were further native deaths over the next few days as the British landing parties were met with hostility, although during the same period a number of friendly natives left food and other offerings for the British.

As for poor Captain Cook the natives took his body back to their village and prepared it for a chief s funeral. This involved disembowelling and baking to remove the flesh before the bones were cleaned and distributed amongst the chiefs as war trophies. One friendly native did manage to secrete some thigh flesh from the gory ritual and he returned this to Captain Clerke. It would be another week before more substantial parts of Cook s remains were returned, and on the afternoon of Sunday 21st these were committed to the waters of Kealakekua Bay in the customary fashion. Next day the Resolution and Discovery set sail from the bloody bay.

Such was Williamson s miserable conduct that Captain Clerke later wrote a damning indictment of it, intending that it be used at a court-martial once they returned home. Sadly Clerke died before the end of the voyage, however eighteen years later at the Battle of Camperdown Captain Williamson was found out for his want of courage, and following the engagement he was court-martialled and dismissed the service for cowardice and misconduct in not bringing his ship to action.

Meanwhile, after re-visiting the Bering Strait and voyaging along the east coast of Japan the Resolution and Discovery continued their long journey home, eventually reaching the Nore on 4 October 1780 under the command of Lieutenant James Burney.