1753-1816. He was born in Newcastle-upon-Tyne, the son of a Joseph Ellison. Having lost his father when he was six months old, he was adopted by a childless aunt who lived near Portsmouth. He was related to General Cuthbert Ellison.

The reporting in the Naval Chronicle of Ellison’s first years at sea is so error-strewn and out of sequence with reality as to make the reproduction of it worthless, suffice to say he appears to have seen a good deal of service under Captain William Bennett, initially from 1762 aboard the Royal George 100 flying the flag of Admiral Sir Edward Hawke, and later aboard the Rippon 60 and Aldborough 20,

In 1776 he found a berth aboard the Somerset 64, Captain Edward Le Cras, and then had a brief spell aboard the Albion 74, Captain Hon. John Leveson-Gower, before returning to the Somerset and going out to Boston where he spent some time in command of three gondolas which were under constant fire from the rebels. Once more back on the Somerset he had occasion to give General Sir William Howe passage in a barge and was asked by that officer whether he would consider an Army commission. The Somerset returned to England in March 1776.

Ellison next joined the Rippon 60, Captain Hon. William Waldegrave, going out to the East Indies in November 1776, and having been commissioned lieutenant on 29 July 1778 he was present under Commodore Sir Edward Vernon in the operations between 10-25 August which resulted in the flight of the French squadron to the Isle de France. As acting lieutenant of the Cormorant 14, Commander William Owen, he was present at the capitulation of Pondicherry on 17 October, and continuing in the that sloop he was taken prisoner by the Turks when trying to recover some deserters who had taken the Muslim faith at Suez in the Red Sea, only being released when Captain Owen threatened to level the town. Upon returning to Madras Captain Owen died and was succeeded by Captain Charles Morice Pole, who brought the Cormorant back to England in March 1779. 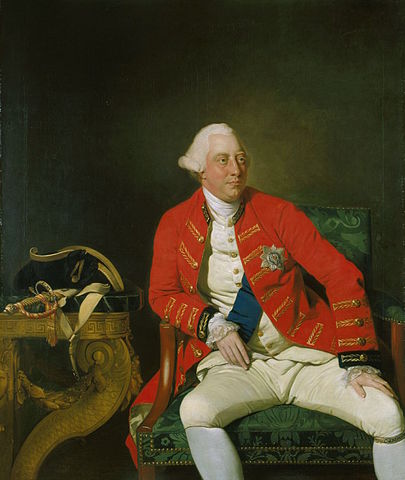 Ellison famously asked King George whether he could be gifted His Majesty’s frigate Druid, given the length of time he had commanded her.

Ellison’s next appointment to the Queen 90, Captain Alexander Innes, saw him witness the Channel fleet’s retreat from the Franco/Spanish fleet in August 1779. At the end of the year, he was appointed to the Prudente 36, Captain Hon. William Waldegrave, going up to the Baltic and then joining the Grand Fleet at Spithead. On 4 July 1780 the Prudente 36 and the Licorne 32, Captain Hon. Thomas Cadogan, captured the new French frigate Capricieuse 32 off Cape Ortegal in a most bloody engagement. After being wounded twice, one being a particularly bad injury to the back, Ellison refused to leave the deck but then had his right arm shattered by an 18-pound cannonball. A French surgeon amputated the arm above the elbow and after going ashore to invalid at Gosport Ellison was visited not only be a number of naval officers but the French officers as well. This attention appears to have caused a relapse and he was soon confined by the surgeons at Haslar Hospital to his room with minimal visitation. Even the King wanted to know of his condition and wished him well when interviewing Captain Waldegrave.

Gradually recovering, Ellison was unable to obtain neither active employment nor a promotion for his part in the Capricieuse’s capture, it being pointed out by Lord Sandwich that his claim was subordinate to those of the senior lieutenants aboard the Prudente and Licorne, so instead he accepted a position in the Impress Service at Gosport whilst his health recovered, and he soon proved his worth by detaining forty-five deserters on an East Indiaman. On 6 June 1782, whilst remaining in the Impress service at Gosport, he was promoted commander of the Ostrich 14, which vessel was soon decommissioned, and on 21 January 1783 he was posted captain and appointed to the Panther 60 whilst continuing in the Impress Service.

Evidently being well regarded by the successive first lords of the Admiralty, Viscount Keppel and Viscount Howe, Ellison was able to obtain further employment following the peace on fishery research off the north coast of Ireland aboard the Ariadne 20, which he had recommissioned in April 1783. However, after returning to Spithead in September his wounds prevented him from continuing in service and he temporarily retired ashore.

Ellison was re-employed with his appointment in February 1785 to the frigate Druid 32, based at Plymouth and in succession to the sickly Captain George Anson Byron. One of his first duties after going around to Portsmouth in March was to assist Captain George Vandeput in command of the yacht Princess Augusta convey Prince Edward to the Baltic, where he was to commence his military studies in what is modern-day Germany. Returning home, he commanded a small squadron off Devon and Cornwall in the preventative service, and later the whole coast from Dungeness to the Lizard on a temporary basis for Captain Edward Thornbrough.

After the Druid was paid off in 1788 Ellison spent a short time in unemployment before recommissioning her in October 1790, being attached to the Grand Fleet during the Russian Armament in 1791. He then received secret orders to proceed to Barbados and Jamaica and to link up with Captain Inglefield of the Medusa 50 but having spent a few months at the latter island both officers were recalled and entered the Channel in September 1792. Upon learning that the Royal Family was at Portland they sailed in to pay their respects and Ellison joked with King George that he should have the Druid as a present, given the length of time he had commanded her. With a great deal of difficulty, the Druid survived a storm in the Channel in January 1793, which at the time was reported as the worst ever recorded in those waters.

Continuing with the Druid following the opening of hostilities in 1793, Ellison brought home the Portugal convoy and cruised successfully with the Circe 28, Captain Sidney Yorke, under his orders, taking a number of enemy prizes including a French St. Domingo merchantman in March valued at 30,000 guineas, and the privateer Espérance 14 in the Channel in June. Subsequent service included a period under the orders of Rear-Admiral John MacBride in early 1794, going so close to reconnoitre Cherbourg in March as to be fired upon by the batteries. Returning to Plymouth in early April, the Druid lost her masts after going aground in Plymouth Sound, whilst later only the daring and local knowledge of Captain Sir James Saumarez of the Crescent 36 saved a squadron including the Druid from capture by a superior French squadron off Guernsey on 8 June. Thereafter Ellison saw little excitement prior to the Druid entering Portsmouth from a cruise towards the end of March 1795

Having transferred in to the Standard 64 with all his officers and some of the Druid’s crew in April 1795, his new command joined Commodore Sir John Borlase Warren’s expedition ferrying French Royalist forces to Quiberon Bay, but although she was detached when this officer learned of the French fleet being at sea, she arrived too late to participate in the Battle of Groix on 23 June. Following the battle Warren despatched Ellison to attempt to negotiate the surrender of Belleisle, and here he remained for upwards of six weeks, alternately being shot at by the garrison but receiving presents of fruit and fish until forced to withdraw when his men began suffering from scurvy. Retiring to the island of Hoedic, he destroyed its forts before setting up a tented hospital for his men, and once they had recovered about six weeks later, he conveyed the Comte d’Artois to Noirmoutier. A spell in Quiberon Bay followed before he returned to Plymouth at the beginning of December. 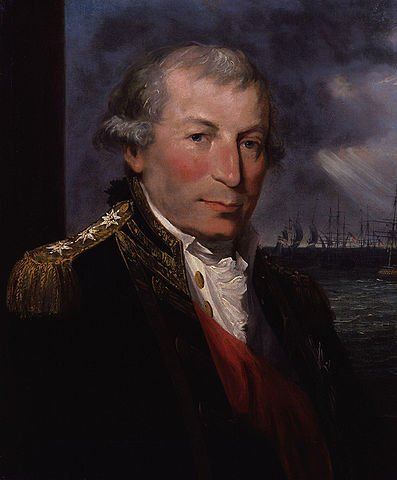 Ellison’s career came to a shuddering halt when he displeased Admiral Earl of St. Vincent in 1797.

Thereafter departing Cawsand Bay in February 1796, the Standard undertook convoy duty from St. Helena with a return to the Downs on 2 August, subsequent to which she was refitted at Sheerness and Ellison went ashore for the benefit of his health, enjoying a four-month rest whilst Captain William Lukin acted for him.

In August 1797 he was appointed to the disaffected Marlborough 74 after the crew had engineered the removal of their despotic captain, Henry Nicholls, in the Spithead mutiny from 16 April. Initially joining the Channel Fleet, one of Ellison’s first tasks was to rescue the outward-bound East Indiaman Belvidere which had lost her rudder in poor weather and had to be towed to Spithead to ensure her salvation. Meanwhile he gained the confidence of his men to such an extent that sixty who were granted liberty ashore conspicuously returned to the ship on time.

Unfortunately for Ellison his active career came to an end when he ran afoul of Admiral the Earl of St. Vincent in May 1798 after the Marlborough had sailed to supplement the Mediterranean fleet. A number of disaffected Irishmen planned to take over the ship on the voyage out, but an alarm was given and the mutineers quickly fled to their hammocks. Ellison and his officers remained on duty all night and the next day the two ringleaders were identified and placed in irons. St. Vincent welcomed the Marlborough to the Mediterranean fleet by instructing her to anchor between two columns of ships with their guns run out. When one of the mutineers was court-martialled and found guilty of planning to seize the ship and sail her to Ireland he was condemned to death, and in typically blunt fashion St. Vincent ordered that the guilty man’s own shipmates hang him at 8 o’clock the following morning. Ellison hurried aboard the Ville de Paris to voice his concern that his men might refuse to execute this punishment, but he was forced to do so before the whole of the flagship’s company, resplendent in their full uniform. After hearing him out St. Vincent stated that if the Marlborough’s captain was unable to carry out his duty, then he would be replaced by an officer who could. The chastised Ellison was ordered to repair to the Marlborough and prepare for the next morning’s execution, which duly took place.

Although Ellison subsequently received a public letter from the Admiralty congratulating him and his officers on preventing the original mutiny his position in the Mediterranean fleet was no longer tenable, and he returned home aboard the Blenheim 74 with Vice-Admiral Sir John Orde, who had also enjoyed hostile relations with St. Vincent. On arrival home he retired once more to the Impress service, apparently for the benefit of his health and agitated mind, and he remained in this role until the peace.

Ellison was later appointed the third captain of Greenwich Hospital, became a superannuated captain on 9 November 1805, and as second captain and director of the chest at Greenwich he died in his apartments there on 1 October 1816.

He married Esther Collis of Gosport at Alverstoke, Hampshire, on 6 November 1779. A daughter, Esther Eliza Basden, predeceased him in Guernsey in May 1810.

Ellison received a meagre lieutenant’s pension for the loss of his arm in 1780, which to the opprobrium of many contemporaries was not increased when he was posted captain. The acerbic Earl of St Vincent had already labelled Ellison a ‘driveller’ prior to their unfortunate meeting in May 1797, but another commentator stated that he was humane, generous, and possessed of a cheerful demeanour and was beloved by his men.