1747-1829. He was born at Pontefract, Yorkshire, the second son of George Swiney and of his wife, Lucy Howes. 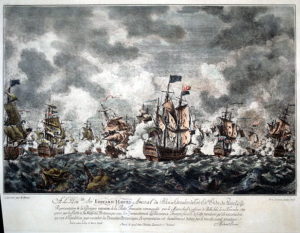 Swiney saw action at several battles, including that of Quiberon Bay in 1759, shortly after he had joined the navy.

Having entered the navy aboard the Hero 74, Captain George Edgcumbe, Swiney saw almost immediate action when present at the Battle of Quiberon Bay on 20 November 1759. He was commissioned lieutenant on 10 January 1771, and after employment in the Leeward Islands aboard the Pomona 18, Commander Henry Bryne, he transferred in 1775 to the Portland 50, Captain Thomas Dumaresq, which vessel flew the flag of Vice-Admiral James Young on that station.

By the summer of 1777 he had become the first lieutenant of the Portland, and in June he assumed command of the newly-purchased sloop Comet upon being promoted commander by Admiral Young. Retaining her into the following spring, he then transferred to the sloop Cygnet on the same station before returning to England.

Swiney was posted captain with seniority from 2 May 1779, having set sail for North America the day before in command of the Europe 64 with the flag of the new commander-in-chief, Vice-Admiral Marriot Arbuthnot, a number of other men-of-war being in company. This force was immediately detoured by news of a French attempt to invade Jersey and was thus late arriving in New York, not reaching the city until 25 August. Although attached to the force that departed New York in December to undertake the capture of Charleston on 11 May 1780, the Europe was deemed to heavy to be able to cross the bar into Charleston Harbour and was instead despatched to Port Royal, which had been captured on the voyage south. He next raised Arbuthnot s flag aboard the Royal Oak 74 two months later, commanding her on 16 March 1781 at the Battle of Cape Henry.

In the early summer of 1781 Swiney was succeeded aboard the Royal Oak, and by October he was commanding the Assurance 44 on the North American station, paying her off in February 1784 after returning home.

He briefly commissioned the Atlas 90 for service in the Channel in October 1787 during the Dutch Armament, but within a matter of weeks she was paid off.

Swiney was promoted rear-admiral on 20 February 1797, at that time being the senior captain on the list, became a vice-admiral on 1 January 1801, and an admiral on 18 April 1808. He died on 1 January 1829 at Sydney Place near Exeter, his address at the time of his death being given as Saint Sidwell, Exeter.