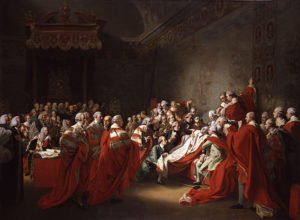 Pitt is the officer in naval uniform depicted at the side of his dying father, the Earl of Chatham, in 1778, although it is unlikely if he were actually present on that day.

Pitt joined the navy in 1775 under the patronage of a family friend, Captain Alexander Hood, who at the time was commanding the yacht Katherine and held the sinecure of treasurer to Greenwich Hospital. In December 1777 he joined the Robust 74 with Hood, and on 18 February 1778 was commissioned lieutenant of that vessel, serving in the Channel fleet. After participating in the Battle of Ushant on 27 July Captain Hood gave controversial evidence in favour of Vice-Admiral Sir Hugh Palliser at the resulting court-martial on Admiral Hon. Augustus Keppel in the following January. When it came to his turn to give evidence Pitt affirmed that Hood had altered the Robust’s logbook after the event as he claimed it to have been ‘ill-written’. Under such circumstances, and given the huge political divide in the navy at the time, Pitt’s brother William wisely organised his removal from the Robust.

In the spring of 1779 Pitt joined the Greyhound 28, Captain Archibald Dickson, which frigate was being refitted and coppered at Sheerness. The Greyhound subsequently participated in the destruction of enemy shipping at Penobscot in North America during Captain Sir George Collier’s May-August campaign, and having returned home in the autumn she was detached with the West Indian trade and transports on 4 January 1780, being present at the Battle of Martinique on 17 April.

In the summer of 1780 Pitt assumed command of the sloop Hornet 14 in the Leeward Islands, which vessel had long been commanded by the tyrannical Commander Robert Haswell, but on 13 November he died of a fever whilst the Hornet was refitting at Antigua, and he was buried in St. Paul’s Church, Falmouth, on that island.

Pitt allegedly fathered an illegitimate daughter with a slave girl on Antigua. He was described as possessing a lively disposition.