1745-1840. He was the son and great-grandson of post captains, the brother of Captain Valentine Edwards, the nephew of Admiral Richard Edwards, and the uncle of Rear-Admiral Valentine Collard.

Edwards began his service in 1758 aboard the Dover 44, Captain John Bladon Tinker, which vessel was employed patrolling the coast of Northern Scotland and the Orkneys, and he afterwards moved to the newly commissioned frigate Argo 28 with his captain. Early in the following year the Argo emerged from an enveloping fog close in to the shore at Le Havre, and noting the furious boat-building programme in progress Tinker made for England to report that the enemy appeared to be constructing an invasion flotilla. As a consequence Rear-Admiral George Brydges Rodney was sent to destroy it in its infancy.

After spending the rest of the year off the Netherlands, Tinker was appointed to the Medway 60 and in March 1760 despatched in convoy to the East Indies, where in August Edwards assisted at the cutting out of the French frigate Baleine 32 from the Pondicherry Roads. Edwards continued in the Medway until Pondicherry capitulated in January 1761, whereupon she sailed around to Bombay and he transferred into the Baleine, Captain Philip Affleck.

The Baleine was soon afterwards despatched on a mission to the French owned Mauritius, and at the Island of Diego Rays her captain provided dinner to the French governor. This official had been unaware of the frigate s capture by the British, and after being chivalrously feasted he was put ashore. Edwards continued in the East Indies, serving in the expedition to Manila, and after he had followed Affleck to the Argo he voyaged to Bengal before returning to Madras in December 1764. After rejoining Commodore Tinker s Medway he returned to England two years later.

In 1768 Edwards was appointed to the frigate Venus 36, Captain Hon. Samuel Barrington, sharing the midshipman s berth with the Duke of Cumberland, and in which vessel he served in the Mediterranean and Channel. He then moved to the Salisbury 50, Captain Andrew Barclay, which saw duty as the flagship to Commodore James Gambier, the commander-in-chief in North America, going out to that station in 1771 and returning in the following year. He was thereafter aboard the Panther 60, Captain Cornthwaite Ommanney, flying the flag of Commodore Molyneux Shuldham at Newfoundland, and returning home each autumn. 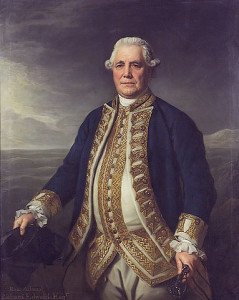 Edwards was posted captain by his uncle, Rear-Admiral Richard Edwards.

Having been commissioned lieutenant and appointed to the schooner Quebec on 2 August 1774, Edwards spent the winter at St. John s, and the next summer in protection of the fisheries before driving his vessel ashore in the Bay of Soic on 12 September 1775 to avoid capture. The new commander-in-chief, Rear-Admiral Robert Duff, immediately appointed him to the schooner Canada in which he again wintered at St. John s, and at the end of 1776 he transferred to the sloop Martin 14, initially commanded by Captain Henry Harvey, this vessel conveying the trade to Lisbon and returning to England in January 1778 after Commander Charles Chamberlayne had acceded to the command.

Two months later Edwards was appointed to the Ardent 64, Captain George Keppel, the flagship of Rear-Admiral James Gambier, which after a difficult passage arrived with a convoy at New York in July and was blockaded there with Vice-Admiral Lord Howe s fleet for two weeks by the French. The Ardent afterwards joined Howe in the engagements with the French off New York and Newport during July-August, then served with Vice-Admiral Hon. John Byron s fleet before his departure for the West Indies, and that of Howe for England, left Gambier as the senior officer in North America.

On Christmas Day 1778 Edwards finally profited from his connection to Gambier by being promoted to the command of the fireship Volcano which was converted into a sloop, remaining at Sandy Hook until June 1780 when he transferred to the Atalanta 16 at Newfoundland and wintered there as the senior officer. On 28 May 1781, being in company with the brig Trepassey 14, Commander James Smyth, the two vessels were captured by the American frigate Alliance 36 after a four and a half-hour engagement which saw casualties of six killed and eighteen wounded aboard the Atlanta. After being taken to Boston aboard the Alliance, Edwards was sent back to Newfoundland three months later for exchange on the basis that his uncle, the commander-in-chief Rear Admiral Richard Edwards, always returned American prisoners by the first cartel. He was appointed to his uncle s flagship, the Portland 50, and on 16 October 1781 was posted captain, returning to England early in the following year when his uncle resigned his post on the change of government.

Edwards was not re-employed until December 1782 when he joined the frigate Diana 32 in which he narrowly avoided capture in the Bay of Biscay by a French fleet of thirteen sail of the line. Suspecting that this force was bound for the West Indies, he was despatched thither to apprise Admiral Hugh Pigot of their approach, and he remained in the Caribbean until the end of hostilities, his command being paid off in August 1783.

From 1787-90 he commanded the Champion 24 at Leith, and in the late summer of 1793 commissioned the new Terpsichore 32 at Woolwich, going out to the Leeward Islands that December to join Vice-Admiral Sir John Jervis expedition. After commanding the Veteran 64 in the latter half of 1794 he returned home at the end of the year to recover from yellow fever, taking passage with his friend Captain John Brown of the Asia 64.

During 1795-8 he served with the impress service in Kent, and from April 1798 commanded the Imp tueux 74 in the Channel fleet on a temporary basis for the invalided Commodore John Willett Payne, retaining her until that officer was promoted rear-admiral in February 1799. From March 1799 to December 1800 he commanded the St. George 98 on the same station, although he served with Rear-Admiral Sir Charles Cotton s reinforcements in the Mediterranean during the breakout of the Brest fleet on 25 April 1799. He left the command on his promotion to rear-admiral on 1 January 1801.

He was further promoted to vice-admiral on 13 December 1806 to accommodate the advancement to that rank of Sir James Saumarez, became an admiral on 4 June 1814, and died at his residence of Greyfriars in Ringwood, Hampshire, on 14 September 1840 at the age of ninety-four, being buried in the local church.

Edwards married an American, Catherine Kibble, in December 1789 and had two sons who later served in the navy, his first son Richard becoming a commander, and his second son and namesake Sampson being born in January 1997 and commissioned lieutenant in 1841, although he was never further promoted. Edwards brother, Captain Valentine Edwards, died when the Sceptre 64 was wrecked with the loss of two hundred and ninety-one lives in Table Bay at the Cape on 5 November 1799.