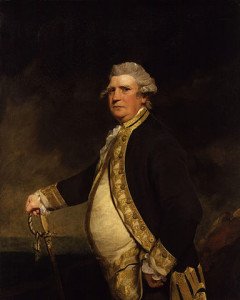 Keppel was the nephew of the great Admiral Viscount Keppel

@1760- 1782. He was one of several illegitimate children of Lieutenant-General Hon. William Keppel and of the actress Hannah Haughton, and was acknowledged as a nephew by the general s brother, Admiral Viscount Keppel.

Keppel was commissioned lieutenant in November 1778 and joined the newly commissioned Alfred 74, Captain William Bayne, serving initially in the Channel and later in the Leeward Islands.

He was promoted commander on 14 February 1781, whereupon he commissioned the American merchant brig Americain, confiscated at the seizure of St. Eustatius, as the Germaine 16. He thereafter commanded her in North American waters and in the Leeward Islands where he assisted in the rescue of the crew of the Santa Monica 36, Captain John Linzee, after she was run aground on the island of St. Johns off Tortola on 1 April 1782 to prevent her from sinking.

The Germaine was with the Leeward Islands fleet prior to the Battle of the Saintes on 12 April 1782, although not present at the engagement. Two days after the battle Keppel left his command, and he was subsequently posted captain with seniority from 22 May.

Having decided to return home for the benefit of his health Keppel died in the sinking of the Centaur 74, Captain John Inglefield, off the Newfoundland Banks in the Central Atlantic Hurricane of September 1782.

Keppel, who was unmarried, apparently felt a sense of entitlement and held himself in high-esteem.