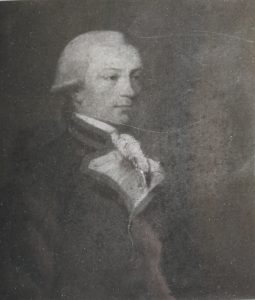 1743-1811.He was the second of four sons of the Reverend John Graves of Castle Dawson, County Londonderry, Ireland, and of his wife Jane Hudson. He was the nephew of Admiral Samuel Graves and the cousin once removed of Admiral Lord Thomas Graves. His brother, Admiral Sir Thomas Graves, was second-in-command to Vice-Admiral Lord Nelson at the Battle of Copenhagen, and two other brothers, Samuel, and Richard, became superannuated admirals, as did his cousin David Graves.

John Graves was commissioned lieutenant on 13 July 1762 and commanded the cutter Hornet 6 from June 1769 until January 1771, seeing some service out of Liverpool. He was a lieutenant of the Preston 50, Captain John Robinson, flying the flag of his uncle, Vice-Admiral Samuel Graves, the commander-in-chief in North America, when that vessel went out to Boston in the early summer of 1774, and on which ship his brothers Samuel and Richard also served. In this capacity he was sent to assist his other younger brother, Lieutenant Thomas Graves, when that officer’s command, the schooner Diana 4, was attacked by two thousand colonials with two field guns on 27 May 1775 after grounding on the receding tide in the Charles River. In putting up a brave defence both brothers were severely burned when the rebels set the Diana alight.

Shortly afterwards Graves took command of the schooner Saint Lawrence 10, and having briefly commanded the sloop Nautilus 16 at Boston in a temporary capacity for Commander John Collins he was with the Saint Lawrence off Cape Fear, North Carolina in April – May 1776, and witnessed the unsuccessful attack on Charleston on 28 June, where his vessel grounded several times over the course of five days in Spencer’s Creek whilst supporting the troops. He reportedly retained the Saint Lawrence until December, and was due to replace his brother Samuel in command of the Viper 10 in the late summer of 1777, but before that vessel could return from the St. Lawrence River he obtained leave to return to England.

Graves was promoted commander on 11 April 1778 of the new Ipswich-built sloop Savage 14, which was off Harwich in May, at Sheerness in June, and in which he set sail for North America from Plymouth with dispatches in September. Whilst in passage she captured a large snow bound from Saint Domingue to America with a cargo of sugar and rum, but the prize crew was overcome by the Americans who in turn had the misfortune to run into the Squirrel 24, Captain Henry Harvey, on her return from the coast of Africa. In North America the Savage became attached to Vice-Admiral Hon. John Byron’s fleet before Graves was replaced in command by his brother Thomas in March 1779.

A period of unemployment followed until Graves was posted captain of the Sandwich 90 on 21 January 1783, which vessel was ordered to be paid off at Chatham in February. Thereafter he did not see any further employment but was superannuated as a rear-admiral on 30 December 1805.

Graves died on 6 May 1811 and was buried in St. Austell, Cornwall

He married Elizabeth Sawle on 20 April 1786, and their elder son was Sir Joseph Sawle-Graves, 1st baronet. They had a second son who died young and two daughters. His residences included Barley House near Exeter in County Devon, and Penrice House, St. Austell, Cornwall.

Thankyou to Gerard Molyneux for providing the image of Admiral Graves.