1769-1834. He was baptised on 20 January 1769, the second son of Charles Pilford, a farmer and landowner of Horsham, Sussex, and of his wife Bathia White. His elder brother, Charles, joined the Navy, but lacking patronage sought employment in the East India Company during the 1780 s and died whilst the ship on which he was serving, the Ocean, was at China in August 1792. Their sister, Elizabeth, was the mother of the renowned poet, Percy Shelley.

It has been stated that Pilford joined the Navy in 1780 as a captain s servant, but it is not clear on which ships he initially served. In October 1788 he entered as an able seaman aboard the Crown 64, Captain James Cornwallis, carrying the broad pennant of Commodore Hon. William Cornwallis, and by the time she sailed for India in February 1789 he had joined the midshipman s berth. He returned home with the Crown in May 1792.

Once the Crown had been paid off on 5 June 1792 Pilford joined the Portsmouth guardship Brunswick 74, Captain Sir Roger Curtis, as an able seaman, being promoted midshipman once more on 27 January 1793, and masters mate on 1 March. Pilford fought at the Battle of the Glorious First of June in 1794, during which engagement Curtis successor, Captain John Harvey, was mortally wounded, but who before his death recommended Pilford to the commander-in-chief, Admiral Lord Howe. After employment aboard the Channel Fleet flagship Queen Charlotte 100 from July, bar six months on leave during October-December, Pilford was commissioned lieutenant of the Russell 74 by Admiral Lord Howe on 14 February 1795, and he served at the Battle of Lorient on 23 June when she was commanded by Acting-Captain Thomas Larcom.

At the end of August 1795 he joined the sloop Kingfisher 18, Commander Edward Marsh, which was at Spithead in early 1796 before joining the escort of a convoy going out to the West Indies in March. Returning to serve off Lisbon, she brought despatches into Falmouth in August and then went back to serve off the Portuguese coast, where in early 1797 she captured a small French privateer and drove another onshore. Briefly from March 1797 Captain John Bligh held the Kingfisher s command, and on 1 July Pilford assisted her new captain, John Maitland, with their swords drawn in forcibly putting down a mutiny. Potential transfers from the Kingfisher to the Russell 74 and the Commerce de Marseilles 120, at the behest of Rear-Admirals Sir Hugh Christian and Charles Morice Pole respectively, were negated by the failure to find a replacement for him aboard the Kingfisher, but by the beginning of September 1797 he had left the sloop, whereupon he appears to have spent eight months on the beach. 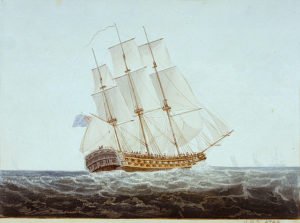 In April 1798 Pilford joined the Imp tueux 74 under Acting-Captain Sampson Edwards for the indisposed Commodore John Willet Payne, serving with the Channel Fleet. In March 1799 the esteemed Captain Sir Edward Pellew took command of the ship, and during the Quiberon Bay expedition from June 1800 Pilford commanded the boats at the destruction of the French Insolente 18 in the Morbihan. By the time the Imp tueux was paid off at Plymouth on 14 April 1802 he had risen in seniority to become her first lieutenant.

Although hostilities with the French re-opened in May 1803 Pilford remained unemployed until October 1804 when he was appointed to the Hindostan 54, Captain Alexander Fraser. When this vessel was ordered out to the East Indies in the following March he removed to the Dragon 74, Captain Edward Griffith, which went out to the Mediterranean in May. Transferring to the Ajax 74, Captain William Brown on 2 July 1805, he fought at the Battle of Cape Finisterre on 22 July.

As a consequence of the criticism of his conduct at the Battle of Cape Finisterre ,Vice-Admiral Sir Robert Calder left the fleet congregating off Cadiz under Vice-Admiral Lord Nelson on 14 October to return home for a court-martial, and Captain Brown departed with him as a witness. Consequently it was Pilford who commanded the Ajax as a lieutenant at the Battle of Trafalgar on 21 October, where she was eighth in Nelson s column, and as such came later into the battle than most of her consorts. Her arrival in the vicinity of the Intr pide 74, which had been engaged in a bitter action with the Orion 74 for over two hours, help bring about that ship s surrender, and she then attempted to engage Rear-Admiral Pierre Etienne R ne Marie Dumanoir Le Pelley s remaining van division of four ships as they fled the battle, but the French declined the challenge. During the engagement the Ajax suffered casualties of two men killed and nine wounded.

Upon returning home Pilford was posted captain on 25 December 1805, and he received a captain s gold medal for his participation in the Battle of Trafalgar. Most sources state that he did not see any further active service, but although Captain Hon. Henry Blackwood was appointed to the Ajax at the beginning of 1806 he did not join her until June of that year, and as Pilford was recorded as being a member of the court martial that sat in judgement on Captain John Okes Hardy off Cadiz in September 1806 it would appear that he continued to command the Ajax for some time after the Battle of Trafalgar.

Whenever Pilford did retire it was to take up farming in his native Sussex, where he purchased land at Lindfield and Wivelsfield. His financial situation was such that he was able to help support his nephew, the poet Percy Shelley, who had fallen out with his father over his precipitate marriage, but ultimately his farming did not prove to be a successful venture and he sold up in the early 1820 s.

In June 1815 Pilford was nominated a C.B., and after living for a short period in Wales he was employed as the Captain of the Ordinary at Plymouth from April 1828 until April 1831. Unfortunately he suffered a horrific stroke in the latter year which deprived him of most of his powers, and he died at Stonehouse, Plymouth on 12 July 1834 to be buried at St. George s Church, Plymouth.

On 20 June 1803 at Warnham, Sussex, he married Mary Anne Horner of Donhead in Wiltshire, and the couple had issue two daughters.