1751-1824. He was born on 22 December 1751, the third and youngest son of John Orde of Morpeth, Northumberland, by his second wife, Ann Marr. He was the brother of Thomas Orde-Powlett, the politician and first Lord Bolton.

After an education at Morpeth grammar-school Orde entered the navy in 1766 aboard the Jersey 60, Captain William Dickson, flying the broad pennant of Commodore Sir Richard Spry as the commander-in-chief in the Mediterranean. Three years later he joined the Antelope 50, Captain George Gayton, going out to Newfoundland with the broad pennant of Commodore Hon. John Byron. During the Spanish dispute of 1770 he was appointed to the Barfleur 98, Captain Andrew Snape Hamond, which vessel was fitting out as the flagship for Rear-Admiral Lord Howe in the Mediterranean. When this ship was paid off without putting to sea he found a berth aboard the Princess Amelia 80, Captain Samuel Marshall, the flagship of Vice-Admiral Sir George Brydges Rodney at Jamaica. 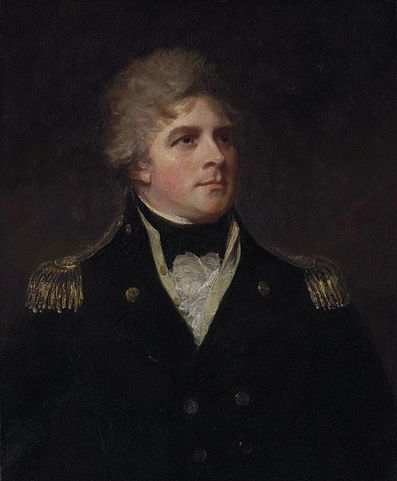 On 7 April 1774 Rodney appointed him with a lieutenant s commission to the sloop Ferret, Commander William Judd. After subsequently returning to England aboard the Rainbow 44, Commodore Thomas Collingwood, Orde spent a little time in France with the intention of learning the language.

In 1775 he went out to North America aboard the Roebuck 44, Captain Andrew Snape Hamond, and whilst on a clandestine mission ashore he was captured by the Americans and only avoided the fate of being shot as a spy when they neglected to search his person. In 1777 he moved as first lieutenant to Vice-Admiral Lord Howe s flagship Eagle 64, Captain Henry Duncan. Following the death in a duel of Captain Hon. John Tollemache on 26 September he was appointed to this officer s sloop Zebra 14, which he commanded at the reduction of the forts on the Delaware, and at Philadelphia during the campaign from 25 August to 22 November.

On 19 May 1778 Orde was posted captain, and he commissioned the captured rebel frigate Virginia 28 on Lord Howe s orders. When the French fleet appeared off New York in July the Virginia was under repair, so Orde went aboard the Raisonnable 64, Captain Thomas Fitzherbert, with most of his crew and participated in the subsequent action with the French of Rhode Island in August.

He served in Captain Sir George Collier s expedition to the Penobscot as part of that officer’s May – August campaign, receiving the surrender of the Hampden 20, and he was present at the reduction of Charleston with Vice-Admiral Marriott Arbuthnot on 11 May 1780. After being sent home with despatches he was appointed to the Chatham 50 in October, and he returned to North America at the commander-in-chief s instigation during December, later capturing the American privateer General Washington 22 on 9 June 1781. He was subsequently nominated Arbuthnot s flag-captain aboard the Roebuck 44 following the commander-in-chief s recall to England, and having exchanged with Captain Andrew Snape Douglas they departed America at the beginning of July. Upon arrival at Spithead the Roebuck was despatched to join Commodore Hon. Keith Stewart s squadron in the North Sea, and Orde spent the rest of the war on this station or off the coast of France, during which period he captured the French privateer Providence on 24 February 1782.

In February 1783 Orde was appointed the governor of Dominica, and he eventually arrived in January of the following year having taken passage with the commander-in-chief of the Leeward Islands, Rear-Admiral Sir Richard Hughes, aboard the Adamant 50, Captain William Hancock Kelly. His most vital task was to bring peace to the island following a Negro revolt, and this he effected with coolness and vigour. On 9 August 1790, having returned to England for the better part of a year, Orde was created a baronet despite some opposition as to his conduct by the island s assembly, and after returning to the Leeward Islands at the end of the year he eventually resigned his position at Dominica in 1793 to rejoin the navy on the onset of war with France.

In quick succession he commissioned the new Victorious 74 in December 1793, which vessel was paid off in the following June, and then her sister ship Venerable 74, serving in the Channel. After being nominated for the command of two secret missions, neither of which took place, he was appointed to the Prince George 98 in the early summer of 1795, but he was unable to take this ship to sea before being promoted rear-admiral on 1 June.

With his flag flying aboard the Cambridge 80, Captain Richard Boger, Orde held the temporary command of the Plymouth station during Admiral Sir Richard King s absence in 1797. When the general mutiny took hold in Plymouth on 26 April Orde attempted without success to prevent delegates travelling to Spithead. Later in the year he sat as the president of the court martial on many of the Nore mutineers who had rebelled on 12 May. With his flag in the Princess Royal 98 he then became third-in-command to the Admiral the Earl St Vincent in the Mediterranean, Thomas Baker being his flag-captain from June, and John Draper from September. 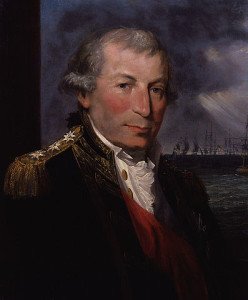 Orde’s dispute with the Earl of St. Vincent over the great admiral’s favoritism towards Lord Nelson resulted in a challenge, with both officers being bound over to keep the peace

With a force of eight sail of the line Orde was entrusted with the blockade of Cadiz, but in the following summer he alleged that St. Vincent had displayed personal suppression, ridicule and derision towards him after he had complained of the favouritism shown to the junior Rear-Admiral Sir Horatio Nelson. Additionally Orde was somewhat aggrieved at the arrival of Rear-Admiral Sir Roger Curtis from the Channel fleet, which had resulted in him being demoted him to fourth-in-command. St. Vincent immediately instructed Orde to shift his flag into the Blenheim 74, Captain Robert Campbell, and he was sent back to England in October 1798, a departure that the commander-in-chief proclaimed had a wonderful affect upon the fleet. When the Admiralty refused him a court martial, Orde demanded personal satisfaction from St. Vincent, but the King forbade this and on 4 October 1799 both officers were bound over to keep the peace. Orde subsequently refused a position in the Channel fleet, and in 1802, after his antagonist s appointment to the position of first lord of the Admiralty, Orde published his side of the affair. Unsurprisingly he had to wait until St. Vincent resigned his office before being re-employed.

Having been promoted vice-admiral on 14 February 1799, Orde commanded a squadron off Cape Finnesterre from the autumn of 1804 in preparation for a war with Spain, flying his flag aboard the Swiftsure 74, Captain Mark Robinson. Following Commodore Graham Moore s capture of the Spanish treasure frigates on 5 October, and the subsequent Spanish declaration of war on 12 December, Orde blockaded Cadiz with five sail of the line with his flag aboard the Glory 98, Charles Craven, and then Acting-Captain Hon. Frederick Aylmer from April 1805. Orde s presence off Cadiz, a station that had previously formed part of the Mediterranean fleet s responsibility, infuriated the commander-in-chief, Vice-Admiral Lord Nelson, who bemoaned the loss of the income he could have expected from prizes taken in that sector. It was stated at the time that Orde s posting to the Cadiz station was a political appointment at the expense of St. Vincent s outrage, as well as Nelson s pocket to the tune of 100,000. Nelson s fury increased when it became apparent that Orde was diverting the Mediterranean fleet s frigates for his own purpose, and on 1 January 1805 the great admiral took the astonishing step of instructing one of his officers to avoid his rival s squadron.

In April 1805 Orde withdrew his five ships to the Channel when Vice-Admiral Pierre Villeneuve s fleet arrived at Gibraltar having left Toulon on 29 March, and critically he neglected to inform Nelson of his departure, although he did send a ship to warn the West Indies. Accusations quickly surfaced amongst his political enemies to the effect that his flight had been a precipitous one to avoid the threat to his many prizes, whilst the trading community registered its dismay over the shipping that had been put at risk by his failure to act. With regard to the latter complaints Orde could at least point to the fact that he had actually obeyed his orders in withdrawing to rendezvous with the Channel fleet.

Shortly afterwards Orde was allowed to retire ashore in accordance with a previous request, apparently because of the gout that had confined him to his cot for weeks at a time, although the criticism of him was undoubtedly a factor. He was promoted to the rank of admiral on 9 November 1805 and despite their previous differences he rose from his sickbed to take his place as a pall-bearer at Nelson s funeral on 9 January 1806.

From August 1807 until 1812 Orde served as the M.P. for Yarmouth on the Isle of Wight in the government interest, and in succession to his nephew, the second Lord Bolton. His death occurred after many years of painful illness at his residence in Gloucester Place, Marylebone, London on 19 February 1824.

Orde married Margaret Emma Stephens of Charlestown, South Carolina on 8 February 1781, who died on 13 September 1790 having produced a son who died as an infant. Three years later, on 3 December 1793, he married Jane, sister of Hookman Frere, and they had five children although only a daughter and son survived him.

He admired Nelson s talents but this admiration was not returned, perhaps because of Orde s obvious resentment of his junior officer. In his late twenties he was described as a handsome young man who looked far younger than his years. A decisive, disciplined, dutiful officer, he was of a resolute, kindly disposition, and these characteristics manifested themselves in his refusal to admonish any offending officer on deck, instead inviting them below to his cabin for that purpose. He was nevertheless bitterly resentful of any implied slur against him. Orde was not a popular officer amongst his peers, being seen as somewhat excitable, petty, and jealous .

Orde s flag-lieutenant from 1797-1800 was John Baker. Many of his followers on the Prince George were considered not to cut a good figure as a gentleman and were suspected of joining the navy from the merchant service. His country address was Burwash, Sussex.