It would appear that Butchart was commissioned lieutenant on 18 April 1778 of the Albion 74, Captain William Blair, flying the flag of Vice-Admiral Hon. John Byron, and transferring with both officers to the Princess Royal 90 in early May before sailing with Byron’s fleet for North America on 9 June. He was promoted commander on 1 December, being appointed to the recently captured French vessel Star 10 by Byron, in which he sailed from North America for the Leeward Islands with his patron’s fleet that month. On 24 March 1779 he was appointed to commission the ex-American privateer Governor Trumbull as the Tobago 16 on the Leeward Islands station.

He was posted captain of the Fame 74 by Byron on 15 June 1779, in which he fought at the Battle of Grenada on 6 July, sustaining casualties of four men killed and nine wounded, and barely escaping capture by the French. During the Leeward Islands Campaign from May to July 1780 the Fame remained at St. Lucia in an unseaworthy condition, and only a minute inspection at Barbados saw her deemed worthy of repair, rather than be condemned. In order to undertake the necessary repairs, she was designated to escort the next homeward-bound convoy. Departing St. Kitts on 19 November with fifty-five sail and the Albemarle 28, Captain Thomas Taylor, they fell in with Quebec convoy to the north of the Azores in early January 1781. On 7 January Butchart was appraised off Portland by a cutter that the French were attacking Jersey, and he sailed thither with Captain Samuel Graves of the Danae 32 to assist in the defence of the island. His command then went around to Chatham in February, and she was paid off in March. 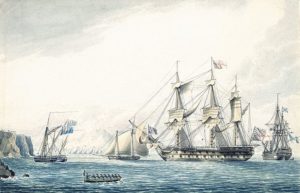 Captain Butchart’s last command, HMS Argo, was captured by the French in 1783 but restored to British colours soon afterwards.

On 31 May 1781 Butchart was appointed to the new Argo 44, which in early June was launched at Howdon Pans Dockyard in the Tyne, being considered a plum new command. By early August she was rigged and ready for sea bar the requirement for more hands to man her, and she finally sailed at the beginning of September from Shields for Chatham to be copper sheathed. In October she was rapidly equipped at Chatham, and she sailed for the Baltic at the end of the month in the company of the Albemarle 28, Captain Horatio Nelson, and Enterprise 28, Captain John Willet Payne, to bring home a convoy. By 4 November she was at Elsinore, and she departed on 8 December with another convoy for Yarmouth. Thereafter, she had reached the Downs by 2 January 1782 from where she went around to Portsmouth on 18 January.

In the first week of February 1782 Butchart took the Argo out from Spithead to Gorée on the West African coast where he assisted Captain Thomas Shirley of the Leander 50 in final operations against the French and Dutch forts on the Gold Coast. Progressing to the Leeward Islands, the Argo and Leander fell in with two French ships between St. Lucia and Martinique on 24 October and gave chase. One of the enemy vessels managed to reach sanctuary under a battery, allowing her passengers including the governor of the French West Indies, the Marquis de Bouille, to escape in row boats, and the Argo then ran down the other vessel, this being the Dauphin 64, which was armed en-flute and mounting 26 guns with some two hundred soldiers aboard, and which was captured following a two-hour action.

On 16 February 1783 the Argo was in the process of replacing a sprung main topmast off the island of Sombrero in the Leeward Islands when she was surprised by the French frigates Nymphe 38 and Amphitrite 32. For nearly seven hours the latter vessel maintained a withering fire, and because of a heavy sea the Argo was only able to respond with her upper deck guns. Upon the further intervention of the Nymphe, which was commanded by a future French admiral, Lieutenant de Vaisseau Pierre-César-Charles-Guillaume Sercey, Butchart was obliged to strike his colours, having lost thirteen men killed. During the action the governor of the Leeward Islands, also called Thomas Shirley, was aboard the Argo, having sought a passage from Tobago to Antigua. Fortunately, the Argo was retaken three days later by the Invincible 74, Captain Charles Saxton, and Butchart was re-appointed to her by the commander-in-chief, Admiral Hugh Pigot, although he appears to have left her shortly afterwards. At about the same time, he and his officers were acquitted of any blame for the Argo’s loss at their subsequent court-martial on 3 April.

Captain Butchart did not see any further employment after his arrival home at Arbroath in August 1783, at which time he was granted the freedom of the borough. He died on 2 June 1795 at Arbroath.

His address at the time of his death was given as Newgate Aberbrothock, Forfar in Scotland.

It would appear that on 14 June 1784 Butchart married Janet Gallerty.