c1741- 90. The son of Elliot Salter, it is believed that he was born in 1741 near Windsor, and that his family originally emanated from Shropshire.

Salter was educated at Eton, and after joining the Navy he was commissioned lieutenant on 3 July 1765 at the behest of Admiral Sir Edward Hawke. He was further promoted commander of the sloop Lynx 10 on 4 November 1769 by Commodore Robert Man, the commander-in-chief in the Leeward Islands, with whom he had served as first lieutenant of the Montagu 60. The Lynx arrived at Portsmouth from Jamaica on 11 September 1770, and shortly after sailing around to the Thames her officers sought to press men from an East Indiaman, the Duke of Richmond, only to be advised that her crew had armed themselves and would resist any attempt to board. The Lynx laid alongside the other vessel and in the melee that ensued one sailor on the East Indiaman was killed and four others admitted to St. Thomas’ Hospital with gunshot wounds. Nevertheless, the crew of the merchantman managed to prevent their impressment. The Lynx was subsequently paid off at Sheerness in November. 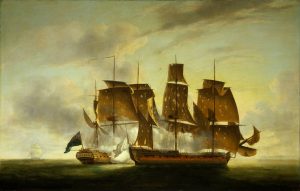 Remaining on the beach for the next five years, Salter was most fortunate to escape with his life when on 29 March 1773 he met and dined with ten fellow commissioners of the Colnbrook Turnpike at the Castle Inn, Salt Hill, near Slough, for within days of the gathering four of the company had died and the remainder fallen sick. Initially Salter’s survival was ascribed to the fact that he had drank punch whilst his fellow diners had drunk wine, but there was later a suggestion that a sickly pauper who had been examined by the group might well have infected them with a disease such as gaol fever.

In December 1775 Salter was appointed to the sloop Cygnet 14 which was under construction at Portsmouth, and which it was claimed would be the finest vessel of her class in the Navy. She was launched in January 1776, but before he could take her to sea, he was posted captain on 21 March of the Romney 50, flagship of Vice-Admiral John Montagu at Spithead. On 4 April they sailed for the Newfoundland station in the company of the Cygnet, Commander Hon. William Clement Finch, and a dozen troop transports. Remaining on that station through the summer, the Romney returned to Portsmouth on 12 November before going out eighteen days later to cruise for three weeks off Lisbon in the company of the Surprise 28, Captain Robert Linzee, in order to monitor the Spanish. After arriving home on 9 January, Salter exchanged with Admiral Montagu’s son, Captain George Montagu, into the Fowey 20, which vessel was under repair at Sheerness, and which was paid off at the end of the month.

In May 1777 Salter was re-appointed to the Fowey when she was recommissioned at Sheerness, but before she departed for North America, he joined the frigate Hussar 28 in July. Arriving at Portsmouth from the Downs on 20 September, she sailed at the beginning of October for Quebec with the governor, Major-General Frederick Haldimand, but had to put back a fortnight later due to adverse winds, whereupon the governor went ashore. The Hussar then appears to have sailed for the Lisbon station where she remained for some time, not least because following a collision with the Portuguese merchantman Sao Bonaventura at the mouth of the Tagus she was detained whilst the local authorities investigated the incident. Eventually, only the interposition of the secretary of state for the southern section, Viscount Weymouth, with his opposite number in the Portuguese government resolved the matter, and after some customary diplomatic posturing the Hussar was allowed to leave.

In early September 1778, whilst sailing for home, the Hussar fell in with the Grand Fleet under Admiral Hon. Augustus Keppel off Lands’ End and Salter had the honour of dining with the commander-in-chief. Days later, the Hussar arrived at Portsmouth with two prize homeward-bound French West Indiamen in tow. On 14 October, in company with the Montreal 32, Captain Stair Douglas, she sailed from St. Helens with the Lisbon and Gibraltar convoy, and serving once more on the former station, she saw a convoy to a certain latitude at the beginning of the following year before returning to Lisbon. At the end of August 1779 reports reached home that in company with the Panther 60, Captain John Harvey, the Hussar had taken twelve Spanish Cadiz-bound merchantmen and their escorting xebec, and had also driven the remaining eight enemy vessels ashore. Not long afterwards reports circulated that the Hussar and the Chatham 50, Captain William Allen, had been driven back to Lisbon after being pursued by two Spanish men of war towards Setubal.

On 15 November 1779, the Hussar departed for home with the Lisbon convoy in the company of the Chatham, and four days later a two-decked ship was observed to be sailing away from the fleet. Believing her to be either a privateer or a member of the convoy which had been captured, Salter gave chase, and after coming up with her in the darkness and discovering that she was a two-decker he decided to wait until the morning before tackling her. The vessel proved to be the Spanish Nuestra Señora del Buen Confeso 64, Captain Don Juan Joseph Ezpeleta, mounting but twenty-six 12-pounder cannons, and bound from Lima to Cadiz via Fayal where she had landed bullion to the value of seven hundred thousand guineas. A forty-five-minute engagement ensued, during which the Hussar prevailed but lost four men killed and ten wounded, and her opponent twenty-seven men killed and eight wounded. Salter sent the prize into Lisbon under the care of the privateer Resolution 16, which had initially attacked the Spaniard, and after briefly regaining the convoy, the Hussar parted company in a gale. On 4 December she arrived at Portsmouth and four days later Salter enjoyed a ‘conference’ with the King in London. Notwithstanding the bullion landed at Fayal, the prize was described in the newspapers as ‘exceedingly beneficial to Captain Salter and his crew’, with estimations that she was worth between one hundred and two hundred thousand guineas, or between £18m and £36m in today’s money. As late as March 1786 a claim to a share of the prize by Captain Allen of the Chatham was brought before the Lords Commissioners of Appeals but was rejected.

Following a period in dock the Hussar dropped down to St. Helens at the beginning of March 1780, and she arrived at Cork on the 15th of that month before returning to Plymouth in the second week of April. Salter left her shortly afterwards, and he was reported to be a ‘fashionable arrival’ in Bath at the end of May.

In March 1781 he was appointed to the beautiful Spanish prize Santa Margarita 36, which following her capture by Commodore George Johnstone’s squadron off Portugal in November 1779 was undergoing a through repair at Sheerness. Sailing from 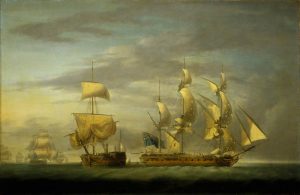 The Santa Margarita has to abandon her prize, the Amazone, on the approach of the French squadron

Spithead for Cork at the end of June to take the New York trade under convoy, no sooner did they put to sea on 19 July than Salter made another profitable capture, this being the Jeune Rose, bound from Saint-Domingue to Nantes, and valued at ten thousand guineas. With the prize being sent into Cork, the Santa Margarita and her convoy of forty-two sail arrived at New York on 7 October, with three vessels having parted company on route. Thereafter Salter and his command remained on the New York station.

On 29 July 1782, the Santa Margarita was chased off Cape Henry by the French frigate Amazone 36, which had eight sail-of-the-line in company. Once the two frigates had parted from these vessels the Santa Margarita turned to fight, and at the conclusion of a seventy-five-minute action the Frenchman struck. British casualties numbered five men killed and seventeen wounded in the action, whilst French casualties were seventy men killed, including her captain, and a similar number of men wounded. The Amazone, which had lost her main and mizzen masts by the time she had struck, was taken in tow but had to be abandoned and her prize crew taken off the next day when the other Frenchmen came in sight.

In May 1782, aboard the Assurance 44 in the North River, New York, Salter presided over the court martial of twenty seamen from the Narcissus 20, for mutiny and sedition against their harsh and tyrannical captain, Edward Edwards. Six men were sentenced to death and the remainder were ordered to be flogged. During August he presented what was described as ‘a splendid illumination, ball and supper’ at Greenwich Village. Back at sea with the Santa Margarita, he took the Salem privateer Hendrick 18 on 30 September, and whilst this vessel was being carried into New York by a prize crew she drove a privateer schooner ashore.

Salter arrived home in September 1783 as a passenger aboard the Quebec 32, Captain Christopher Mason, with his new American wife, and he did not see any further service. In August 1784, a parliamentary bill resulting from his petition for head-money for the capture of the Amazone was passed to the King for Royal Assent.

Captain Salter died at his residence in Portland Place, Bath on 3 February 1790.

He married a widow, Mrs Fanning of Plymouth, with whom he had issue three daughters, and secondly a Miss Johnson of New York, with whom he had a further four children. His address was given as West End House, Stoke Poges near Windsor. His second daughter, Maria, married Captain William Pierrepont at St Paul’s, Covent Garden, in 1797.

The future Vice-Admiral Sir Thomas Fremantle, a fellow native of Buckinghamshire, was placed under Salter’s care at the outset of his career.